Of course I knew that all the big names in the scrapbook industry would be at CHA, but it didn't really sink in until I saw them for myself. It seemed like everywhere I turned, there was someone I recognized from magazines or blogs... I even saw a few TV stars!

The great debate when recognizing a celebrity is whether to interrupt them and gush, or whether to leave them alone and gawk from a distance. I'd say I was about 50/50! I saw Tim Holtz a handful of times, but he was always busy talking to the huge flock of women following him around, so I never actually met him. Same with Jennifer McGuire- I saw her at least 5 times, but wasn't able to find a way to meet her without interrupting. I was in the Technique Tuesday booth when the entire CK Dream Team came in for a meeting. They were clearly working and it would have been incredibly inappropriate for me to bother them. I saw Noell and Izzy Hyman from Paperclipping numerous times, but they were always recording when I saw them. And so it went for another dozen or so scrap celebrities.

So who did I meet? Here are a few of my favorites. 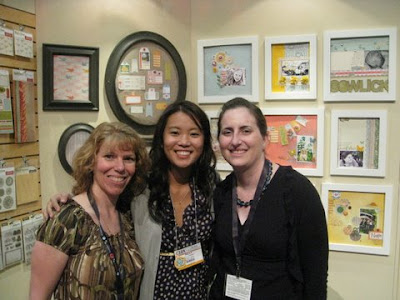 Kelly was alone in the Studio Calico booth, so of course we went right up to her to tell her how fabulous she is! Amanda and I both follow her blog and love her work. She was just as sweet and friendly in person as she seems on the blog. She is totally down-to-earth and had all the time in the world to chat with us. 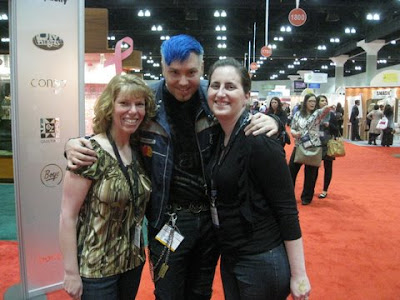 I don't know how to sew and know absolutely nothing about fashion (which I don't need to tell those of you who have ever seen me), but I LOVE Project Runway. I've watched all the seasons. When I saw Suede sitting at a booth in the sewing section of CHA, I had to go over and gush. He was there promoting his new line of dress patterns that Simplicity has picked up. His concept is great. Each pattern comes with variations so that the same garment can be made for three different types of women- classic, flirty or edgy. We each got an autographed pattern from him. Just like Kelly Purkey, Suede had all the time in the world to talk with us and was completely awesome. 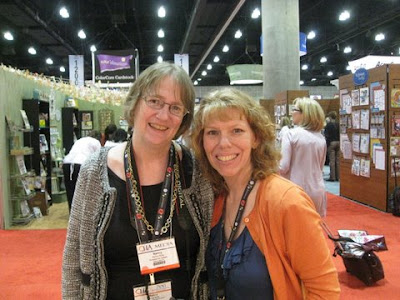 If you don't subscribe to Scrapbook Update and listen to the Paperclipping Roundtable, please stop reading (temporarily!) and immediately go and do both. OK, now that you're back.... let me tell you about Nancy Nally. I saw her in the October Afternoon booth talking with the owner and I zipped right over. I hovered while they talked. When they finished, Nancy started to walk away, thinking I was there to talk with the vendor. I stopped her and introduced myself. She was so nice! We stood there talking for 15 minutes- I heard all about her troubles with her hotel reservations (she was upgraded to a suite because of the problems), what she was enjoying at CHA (everything) and how glad she was that she was sporting comfy shoes (Aerosoles). It turned out that she was rooming with two of my Fiskateer friends, Betsy Burnett and Merlene Brockway. What a nice surprise! 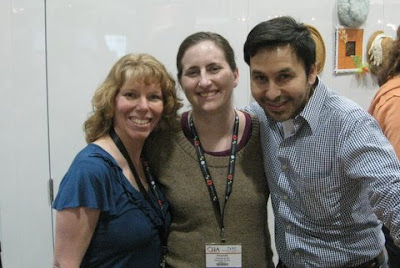 I used to love Mark Montano on "While You Were Out." When I heard that he'd be at the Fiskars booth signing 1000 copies of his new book ("Pulp Fiction"), I put that on my schedule as a must-do! Amanda and I hustled out of our class to try to be among the first in line. Success! We were number 2 and 3. Like the others, Mark was so nice and completely awesome. He was just as funny and cute as on TV. He personalized his autographs and posed for countless pictures. He is a huge fan of Fiskars and does lots of events with them, so I was thrilled to see for myself that all the good things the Fiskateers have said about him are true.
Email ThisBlogThis!Share to TwitterShare to FacebookShare to Pinterest
Labels: CHA 2011