Last week, I shared nine of my favorite restaurant chains that aren't in California but should be. Today is the opposite - nine great restaurant chains that you'll only find in California. It was harder to come up with this list than the other one. Some of the chains that were only in California just a few years ago have expanded outside the state. The best example of that is In-n-Out, which I have been enjoying locally for over 30 years, but has only recently made it to nearby states.
Many of the biggest chains in the US started in California. This includes McDonald's (San Bernadino, 1955), Jack in the Box (San Diego, 1951), Carl's Jr (Los Angeles, 1941), Taco Bell (Downey, 1962), IHOP (los Angeles, 1958), Hot Dog on a Stick (Long Beach, 1946), Jamba Juice (San Luis Obispo, 1990), Cheesecake Factory (Beverly Hills, 1972), Baskin-Robbins (Glendale, 1945), Round Table Pizza (Menlo Park, 1959), and a bunch more. Some of them were only in California when I first had them.

This has the potential to be one of those blog posts that is out of date ten minutes after I publish it, but as of today, you can only enjoy the following chain restaurants in the Golden State.

Boudin Bakery and Cafe is a must-visit when you're in California. Their sandwiches and burgers are outstanding, but my absolute favorite thing to order is their Rustic Tomato soup in a bread bowl. The original San Francisco location at Fisherman's Wharf is enormously popular; build in wait time if you plan to eat there. Use that time to explore the small Bakery Museum onsite and watch the iconic sourdough as it is made. Fortunately, Boudin has expanded both within and beyond San Francisco. There are 7 locations in the City and another 18 throughout the state, including the one near us in Vacaville that we enjoy as often as possible.

Dos Coyotes Border Cafe opened their first location in Davis, CA in January 1991, when I was a freshman at UC Davis. Their delicious southwestern cuisine quickly earned them a loyal following. Our family gets Dos whenever we're in or near Davis. All three of us always get their Border Burritos, which are big enough that we cut in half and enjoy for two meals. Each burrito is stuffed with grilled steak or chicken, beans, rice, cheese, sour cream, salsa, and guacamole, and served with housemade chips. There are now 11 Dos Coyotes locations, primarily in the Sacramento area.

Mary's Pizza Shack is another deRosier family favorite. Their pizza and pastas are delicious, but I almost always get their fantastic calzone. They make the best breadsticks ever. You can get a free breadstick from the basket at the front counter to try; I guarantee you'll buy an order after trying one. There are 14 Mary's locations throughout Sonoma and Solano Counties.

Fentons Creamery is an iconic ice cream shop, beloved in the Bay Area. The Oakland location opened in 1894; the second location opened in 2007 near us at the Nut Tree in Vacaville. Their handcrafted ice creams and sauces are legendary (get the signature Black & Tan Sundae), but that's not all they have. The menu has a wide selection of grilled sandwiches, burgers, and salads. You might remember seeing Russell and Mr. Fredricksen enjoying ice cream at Fentons in the Pixar movie 'Up.' It turns out that Fentons is a favorite place for Pixar employees to celebrate personal milestones and professional accomplishments.

La Bou Bakery and Cafe has a lot of delicious choices, including their famous handmade croissants and tasty scones. They have a wide variety of soups, salads, sandwiches, and paninis; everything I've tried there is delicious. La Bou has 15 locations in the Sacramento area.

Gott's Roadside serves California-inspired burgers, hot dogs, tacos, sandwiches, and more, using locally sourced ingredients. Their motto, "Tray Gourmet," sums up their concept well: high-quality food in a casual setting. I first tried Gott's at the original location in St. Helena, apparently not too long after it opened in 1999. Gott's now has 8 locations in the Bay Area.

Juan Pollo is the master of Mexican-style rotisserie chicken. They first opened in 1984. With great food, low prices, and enormous portions, it's not surprising that they spread and now have 26 locations throughout Southern California. I was introduced to Juan Pollo during my time in Ontario speaking at Pinners Conference.

Leatherby's Family Creamery is a Sacramento institution. First opened in 1982, it is the best place around to get enormous sundaes and great food in a family-friendly place. There are three locations with four generations of the Leatherby family working at the creameries. I first discovered Leatherby's during college and have enjoyed every visit since.

Mel's Drive-In is probably the most famous on this list. This classic American diner first opened in 1947 and has appeared in countless movies, TV shows, music videos, and commercials. American Graffiti was set in Modesto, but the drive-in scenes were filmed at Mel's in San Francisco. There are 8 locations - four in Northern California and four in Southern California, though the history is complicated. Even more complicated is its relationship with Original Mel's, the result of a rift between father and son. Original Mel's has more locations, and while I definitely recommend it, it does not meet the California-only requirement that Mel's Drive-In does. Eat at both when you're in California!

So that's my list of 9 restaurant chains that you should definitely try when you're in California. Are there any I missed? Let me know in the comments! 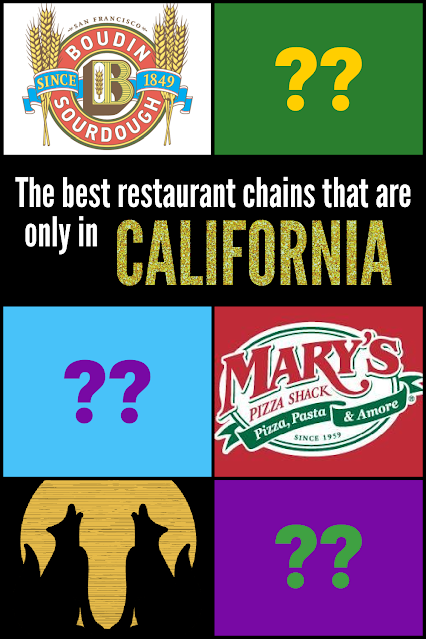