Every once in a while, I take a photo that I am dying to scrap with a story I am dying to tell, yet I set it aside and don't scrap it. Here are two such photos: 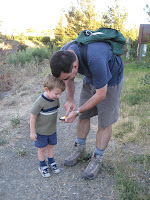 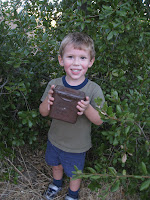 I took these photos the first time our family went geocaching. For those who don't know, geocaching is essentially a treasure hunt using a GPS. There are more than a million geocaches hidden all over the world and anyone is welcome to search for them. All caches contain a logbook and many also contain trading items or prizes too. From our very first find, we've been completely hooked. I was absolutely dying to create a layout about our new-found love of geocaching.

So why didn't I? Why did I save these photos instead of scrapping them? Basically, it's because I knew that geocaching was not going to be a one-time thing for us. I knew that there would be dozens (hundreds? thousands?) more pictures from our geocaching adventures. I obviously wouldn't be scrapping them all. My absolute favorite layouts are the ones that combine photos from different events to tell a more complete story, so I intentionally waited until we had more geocaching photos, then I put them together to make this layout: 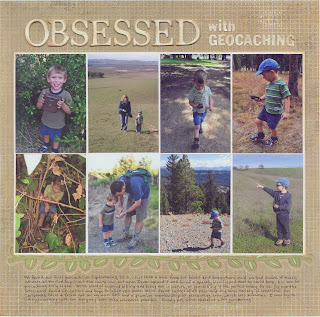 I'm so glad I saved those photos! I love how they work with the other photos in this layout to provide an overview of our first six months of geocaching. For me, saving photos is totally worth it.
Posted by Cindy deRosier at 5:56 PM No comments:

I've heard many scrapbookers complain that they will never be caught up with their scrapping. Some agonize about their huge scrapping to-do list the way other people fret about their personal or work to-do lists. I don't get that. Scrapping is a hobby, not an obligation, yet to hear some people you'd think that it was a horribly unpleasant chore!

Personally, it doesn't bother me that much if I'm not caught up. As long as I can remember the reasons why the photo is important to me, then I'm happy. It helps that I journal daily. There have been many times that I've had to check the journal to help me tell the story exactly the way I wanted it to be told.

On average, I scrap 2-6 months behind. I typically order photos about six times a year, so I have around two months' worth of topics available to me when my photos show up. From those, I pick and choose as the mood strikes me. It's not uncommon for me to scrap events completely out of order, or even scrap parts of an occasion and not get to the rest until months later. I usually have at least 5 layouts (often more) partially done, and there's no rhyme or reason to when they are finished. I put everything in the albums chronologically, but I definitely don't scrap that way!

Here's a layout I finished on March 26. Coincidentally, the latest photo on it is from October 26, five months ago. 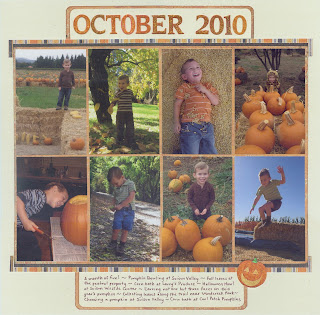 I'm going to have to rearrange the layouts in my album a bit, because I've already scrapped everything from November and I didn't guess correctly about how many October layouts I would make. I suppose if I were truly caught up, I wouldn't have this problem. Oh well!

I should mention that when I say I scrap 2-6 months behind on average, I am not including the literally thousands of unscrapped photos from my childhood, photos I inherited from my grandma, or photos from the years 2002 and 2003 during which I was busy dating my now-husband instead of scrapping. Yes, they're on my long-term to-do list, but I don't let them worry me.
Posted by Cindy deRosier at 5:52 PM No comments:

One of my favorite new-to-me techniques is painting with Stickles. I love using Stickles to make tiny little accent dots on my projects, but it is even more satisfying to paint with them! I've experimented with a few different methods, using a stiff paintbrush, a Q-tip, or the tip itself to spread the Stickles. All of these work and create different beautiful effects!

About a year ago, Trevor came home from an event with a plain white cotton bag holding some goodies. He took out the treasures and promptly forgot about the bag. I decided that since he hadn't used it in a year, he wouldn't miss it. I used Staz-On ink to stamp butterflies on it, then masked a border stamp to create trails between the butterflies. I sprayed the whole thing with various shades of Glimmer Mist. Once it was dry, I put a large glob of aqua Stickles on each butterfly and used a Q-tip to push it into place. Fun! 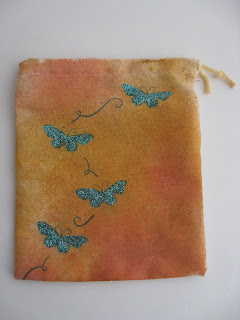 My next project started as a box of granola bars. I cut the cardboard into tag-sized pieces and then stamped a flower vase and sentiment on them. I sprayed each tag with several colors of Glimmer Mist. It took some experimentation to find colors that would show up nicely on cardboard. When the mist was dry, I painted the stamped image using the nozzle of the Stickles bottles. These will be great to hang from a gift bag. 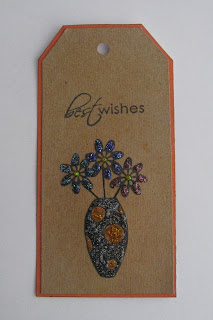 Painting with Stickles is so much fun!
Posted by Cindy deRosier at 5:16 PM No comments:

Email ThisBlogThis!Share to TwitterShare to FacebookShare to Pinterest
Labels: Tips

Contributors select a photo of themselves from their youth and try to replicate it using the same location, clothes, positions, and/or facial expressions. Both the original picture and the current picture are then posted side by side. Some are impressive in their attention to detail and many make me laugh out loud.

A few months ago, I attempted my first Young-Me-Now-Me using a picture of Trevor at 10 months old, cruising along the baby gate at the top of our stairs. I posed him in the same location and position at age 4. Here's the layout I made: 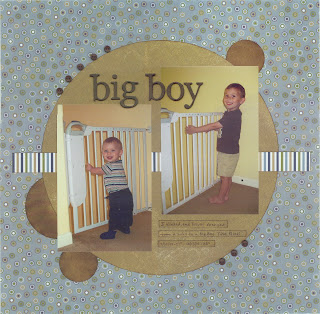 I love the result! It's so fun to see how Trevor has changed and grown in the past 3+ years! I'm going to try to remember to pose him at the top of the stairs like this every few years.

For my second Young-Me-Now-Me, I followed the rules and actually used a photo of myself. My 20th high school reunion was last fall. I went through the old photo albums at my parents' house and found a photo of my friends and me at our 8th grade graduation in 1986. We're sporting some excellent feathered hair and pastel dresses. Too bad you can't see our white hose and pumps! I brought this photo with me to the reunion. With the help of friends who weren't in the photo, six of us posed in the same positions as in the original. What fun!

Emma's Shoppe was perfect for the layout! 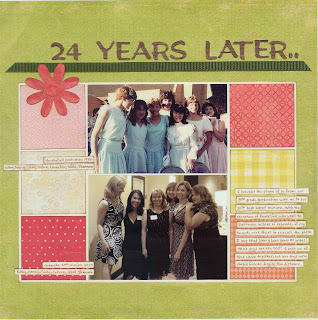 I've got lots of plans for more Young-Me-Now-Me layouts in the near future. There are so many possibilities and they make such fun layouts. I'd encourage all of you to give it a try!
Posted by Cindy deRosier at 11:54 AM No comments:

Every once in a while, the date is pretty cool. Anyone remember the huge number of people who got married on July 7, 2007? There was a giant article in our newspaper about this "luckiest" of dates and how popular 7-7-07 was for weddings. In 2006, I was pregnant, due in June. Because my baby was breech and I had to have a c-section, I was able to choose whether his birthdate would be June 6 or June 7. When I chose June 7, my doctor mentioned how weird it was that NO ONE wanted June 6. It wasn't until I pointed out to her that the date would be 6-6-06 that she understood why no planned c-sections would be happening that day!

On January 11, we had a date made up of nothing but 1's. Even though it was an ordinary Tuesday, I thought the date was special enough to warrant recording what we were doing when the clock said 1:11:11 on 1-1-11. Here's the layout I made: 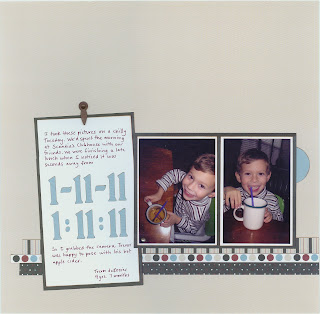 This got me thinking about other layout possibilities during 2011. We'll have another day with all 1's coming up in November (11/11/11). I've already made a mental note to take a photograph at 11:11:11. Chances are, we'll be at the Veteran's Day Parade. But here are some other possibilities for the next few months:

March '11: In many parts of the US, the police code for Indecent Exposure is 311. Obviously, I'm not going to suggest scrapping (or taking) indecent photos, but it could be fun to use a 311 theme to scrap about crazy things your pets do. I have a friend whose cat loves to jump into the bathtub after she showers. How cute would it be to scrap a photo of the cat peeking out from behind the shower curtain?!

April '11: To reach Information here in the US, you call 411. Scrap photos taken in April that help provide more information about a person, pet, or place. Use a title that incorporates 411 to signify both the topic and the date.

May '11: For traffic or transportation information, you call 511. In May, you could scrap about your car, your commute, public transportation, or other ways of getting around.

I'm sure there are many other creative ways to incorporate the date into layouts. I'd love to hear any suggestions you have!
Posted by Cindy deRosier at 5:04 PM No comments:

One of the most talked-about paper lines coming out of CHA is the Portrait Collection from Crate Paper. The line has a strong retro feel. Think cameos, oval frames, vintage cameras, and large florals. Each of the papers is named for an element of a wedding. For example, Bouquet reminds me of the drapes that used to hang in my grandparents' living room. The papers are all double-sided with a bold pattern on one side and something more neutral on the reverse.

I'm not a bold-pattern sort of person, so when I worked with these papers I went right for the more neutral side. While more neutral, they are still vibrant and interesting. They worked beautifully together. Here is the layout I made: 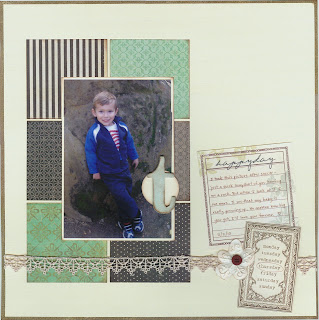 As you can see, despite being named for elements of a wedding, these papers work just fine for other topics, including boy pages. I used the following papers: Honeymoon (top left), Bouquet (top right), June (middle left), Vintage Lace (middle right), Bridesmaid (bottom left), and Pearls (bottom right).

Portrait is a great line. It's beautiful and versatile, and of course, it is the same high-quality that Crate Paper always delivers. I know you'll all enjoy working with it!
Posted by Cindy deRosier at 4:57 PM No comments:

I'm joining the permanent Design Team at Flamingo Scraps! I've been on their Guest Design Team since September and represented them at CHA, and I am thrilled to officially become part of their team.
Posted by Cindy deRosier at 6:19 AM No comments: