Art Materials from A to Z

I've been working on a project for awhile. One letter at a time, bit by bit, until eventually I had all 26. Each letter from A to Z is made with an art material that starts with that letter. Once I had all my letters, I backed each one with a contrasting color. I put them together into a collage and I am in love with the results: 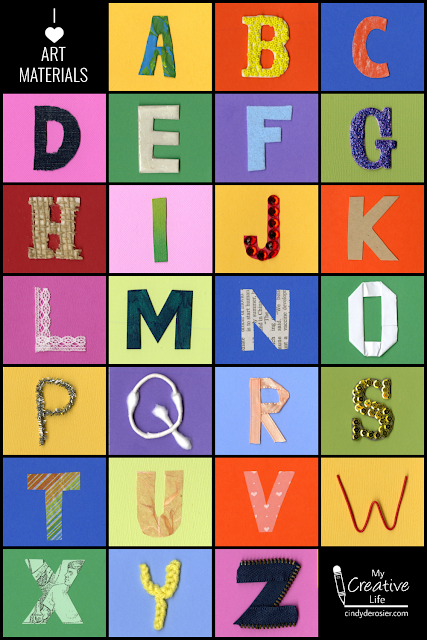 Take a close look and see if you can identify each letter. Some are easy. Some are almost impossible. (If anyone gets U, I am seriously impressed.) Some would be far easier to identify if you could see them in person instead of the scanned version.
Have you made your list yet?
Below are the answers, some info about how I made each letter, and affiliate links to the materials. Tell me in the comments how many you got right!
---------

A is for acrylic. I swirled globs of acrylic paint onto my Frisbee, let it dry, then peeled it off and used scissors to cut it into the letter A.

B is for beads. I covered a chipboard B with tacky glue, then dumped yellow seed beads on top. I used my craft pick to turn the ones that landed on their sides.

C is for crayon. I colored on white cardstock, then cut out a C.

D is for denim. That link goes to denim patches, but I actually cut up an old pair of jeans to make the letter D.

E is for enamel. I cut out an E from cardstock, then covered it with Enamel Accents. I love that stuff. It dries to a hard, shiny, dimensional surface.

F is for felt. Not much to say here. I cut the letter from felt.

G is for glitter. No more loose glitter for me. I'm all about Stickles for maximum sparkle.

H is for hemp. Technically, I'm not sure that the rope stuff I used for this is actually hemp, but I think it is so I went for it. There aren't that many options for H.

I is for ink. I used a blending tool to put different shades of ink onto cardstock, then cut out the letter I.

J is for jewels. Acrylic, but still jewels. In another application, I might call them rhinestones but then they wouldn't start with the letter J.

K is for kraft. I recently learned that kraft paper is named for the German word Kraft, meaning strength. Fortunately, it's easy to cut with scissors.

L is for lace. Two snips of lace ribbon glued together = Letter L.

M is for marker. Really basic here - I colored on paper, then cut it out.
N is for newspaper. Turns out you can buy all sorts of newspaper-printed stuff... deli paper, tissue paper, even wallpaper! I used the local paper.
O is for origami. I found a tutorial for turning a dollar bill into the letter O, but I used white paper instead.
P is for pipe cleaner. Another very quick and easy letter.
Q is for q-tip. This one was tricky. I ended up soaking two Q-tips and then gently easing them into a small medicine cup which held the curve while they dried over the course of a few days. Then I snipped them and glued the parts back together to make the Q.
R is for ribbon. Three snips, two twists, some glue, and a heavy book while it dried.
S is for sequins. I put tacky glue on another chipboard letter and layered the sequins on top.
T is for tissue paper. It took about 2 seconds to cut this out.
U is for unryu. I know it by a different name (starts with M!) but you have no idea how happy I was to learn its U name. Doubly cool because I had some on hand to cut!
V is for vellum. I keep a decent-sized stash of vellum around. I don't use it often, but when I need it there's no real substitute.
W is for wire. Twisteez wire, in this case! Another material I always keep on hand.
X is for xerox. OK, so xerox is not an art material itself, but it's the best I could do for X. I cut the letter from a handout I didn't need anymore.
Y is for yarn. I could have done a few quick snips to make the letter Y, but I opted instead to crochet my letter. It's just a chain stitch, so it was still quick and easy.
Z is for zipper. Remember the denim from letter D? Same pair of old jeans.
Email ThisBlogThis!Share to TwitterShare to FacebookShare to Pinterest
Labels: alphabet, construction paper, Crafts for Kids, PicMonkey