Today is the 51st anniversary of Sesame Street. I grew up watching it and introduced it to Trevor when he was young, but he was never very interested. He didn't start enjoying TV until well past the age where he'd watch Sesame Street.
Recently, The Wrap posted their list of the Sesame Street characters ranked from Worst to Best. I completely disagree with their rankings and thus am compelled to present my own. Since I haven't watched Sesame Street regularly since 1975 when I was three, I'm not familiar enough with some of the newer characters to include them. Telly was introduced when I was seven and Elmo when I was eight, so while I know the characters somewhat, I have no childhood attachment to them. I've never seen an episode with Julia, Abby Cadabby, Zoe, Rosita, or Karli.
I do, however, have many fond memories of Sherlock Hemlock and another character not on their list, Guy Smiley. Affiliate links below. 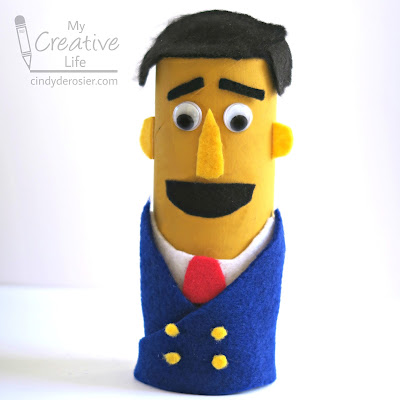 Mix approximately 3 parts Medium Yellow with 1 part Terra Cotta to make a mustard color. Paint the cardboard tube and let it dry completely.
Cut eyebrows and a mouth from black felt. Then, make the hair. I recommend two pieces so that there is a visible part line. I cut the smaller portion, but tore the larger portion in order to make it look a bit more than hair. The cheaper the felt, the easier it is to tear. Use the scissors to snip a tiny bit, then put hard. Feel free to cut both pieces, particularly if you have higher quality felt that doesn't want to tear.
Cut two ears and a nose from yellow. Then cut four tiny circles for the buttons on Guy's blazer. This is where microtip scissors really make a difference.
Cut a scoop neck into a rectangle of white felt. Cut a gumdrop-shaped piece of red felt for his tie, then two large triangles of blue for his blazer.
When all the pieces are cut, you're ready to glue them into place. Start with the mouth; it goes in the center of the tube. Then add the nose, just above the mouth. The eyes go on either side of the nose, with the eyebrows above them. The ears are even with the nose. Glue the smaller piece of hair down first, then layer the larger piece over it. Next, glue the shirt and tie in place. Then layer the two blue triangles so that the blazer covers the shirt. Finally, add the buttons to the blazer.
--------
Back to my rankings. I am going to include the characters who appeared on the 2019 postage stamps honoring the 50th anniversary of Sesame Street, minus the ones created after my early childhood. That leaves 10, a very good number for a countdown. 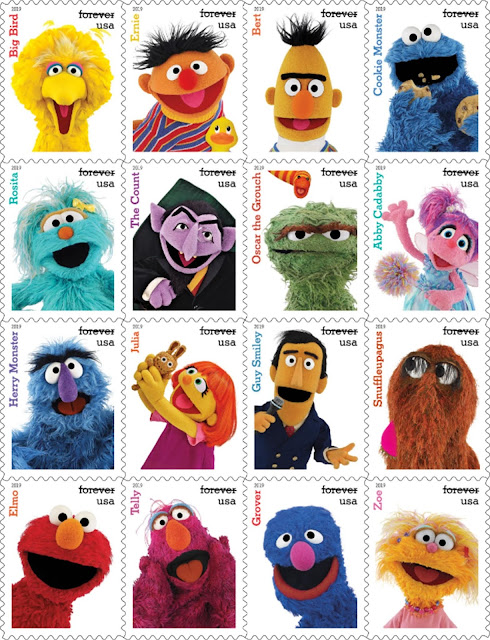 Herry's personality was basically that he was strong, which is not even really a personality trait. There aren't any skits that stand out to me as my favorite starring Herry Monster.

Even at three, I was annoyed that Snuffy couldn't do Big Bird a favor and JUST ONCE stay around for someone else to see him. I have vague memories of skits with Snuffy's parents, but ultimately he's just Big Bird's (alleged) imaginary friend and doesn't stand alone, any more than Oscar's pet worm.

Guy Smiley cracks me up. I love how he comes out of nowhere to host a game show and that the prizes are completely ridiculous. I linked one of my favorites above, but here's a whole Guy Smiley playlist.

Grover is awesome. My favorite Grover skits are him as a waiter. And I strongly believe every child should grow up with The Monster at the End of This Book.

The Count (real name: Count Von Count) is a one-trick pony, but I still love him. This is classic Count, with bonus Kermit.

There's something wrong with you if you don't like Big Bird. It turns out that ranking Sesame Street characters is HARD, because they're all so good. I agonized about this, but Big Bird comes in at #5.

My favorite thing about Oscar is that he lives in a trashcan. He says what's on his mind unapologetically. Rather than share a classic clip, here's one that's very timely. I can SO relate to Oscar!

Ernie is hilarious. Ernie annoying Bert is even more hilarious. I love his laugh. The Bert and Ernie skits were my favorites when I was a kid. I still laugh about Ernie's beard.

Bert is the straight man for Ernie's jokes, but his boring personality is hilarious on his own. And his laugh! I love Bert. Pigeon jokes are incredible.
Email ThisBlogThis!Share to TwitterShare to FacebookShare to Pinterest
Labels: cardboard tube, Crafts for Kids, felt, paint, Plaid, Sesame Street