Every Thursday afternoon, Trevor and I head to the Farmers' Market. I pretty much allow him to pick out whatever he wants. He's an unusual 5 year old, in that he'll eat just about anything and likes almost everything. He's especially fond of fresh produce. This past week he chose peaches, plums, pluots, cherries, two kinds of squash, a Japanese cucumber, string beans, and a large eggplant. 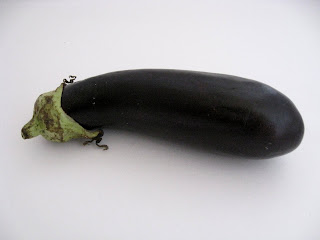 I love eggplant. My usual preparation is eggplant parmesan, though we've grilled eggplant many times too. Short on time, I decided to try something new. I'd heard a suggestion somewhere of boiling eggplant slices and using them in place of noodles. It sounded easy, quick and delicious.

I sliced the eggplant into rounds about 1/4 inch thick, salted them, then put them in the microwave for 2 minutes. I then dropped them into boiling water and boiled them for 5 minutes.

I spread a little tomato sauce into the bottom of a 8" square Pyrex baking dish. Of course, this would be wonderful with homemade sauce, but that would make the recipe significantly less quick and easy. Maybe later in the summer when I actually have fresh tomatoes, but for now I'm sticking with jarred sauce. This is one of my favorites: 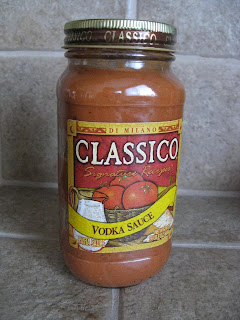 I put a layer of eggplant rounds on top of the sauce, then a layer of mozzarella and parmesan, then repeated the layers three more times. I baked it at 350 degrees for 15 minutes. It came out gooey and bubbly and smelled so good. 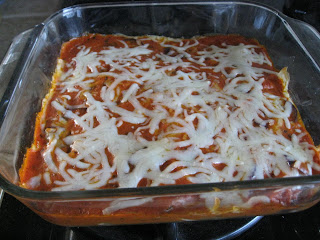