I am a big fan of shrink plastic. In the late 70's, I spent many hours making Shrinky Dinks charms (which I dangled from the laces of my oh-so-cool roller skates and Kangaroo tennis shoes). Over the years, I've bought various brands of shrink plastic, always clear like my beloved Shrinky Dinks. When I saw that Grafix had shrink plastic in white, I was intrigued.

The package comes with six 8.5x11 inch sheets. They are shiny white and completely opaque. The directions say to start by sanding the surface with 300-400 grit sandpaper. The plastic went from smooth and shiny to dull and scratched. I used a rubber stamp and Staz-on ink to stamp 5 identical leaves. The ink went on very nicely with even coverage. It dried immediately. I cut the leaves out, keeping a small edge around the image.

The directions say that permanent markers, water based acrylic paints and heat set paints work best. I don't do a lot of painting, so I focused on testing the materials I do use. 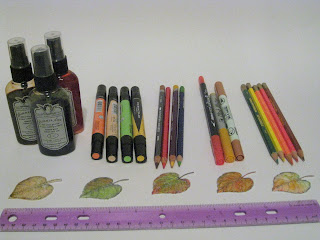 Glimmer Mist:
Tattered Angels Glimmer Mist is a staple in my craft room, so I grabbed three bottles and lightly misted the leaf. The ink beaded up, leaving some areas nearly white. I let it dry and gave it a second spritz. It looked better.  After it shrunk, the colors were much more intense.

Alcohol-based Markers:
I colored the leaf image with Prismacolor Art Markers. This was very frustrating, as the colors did not blend the way they do on paper. I had to go over each area several times to layer on color.  There was some difference in color after shrinking, but not as much as with the Glimmer Mist. 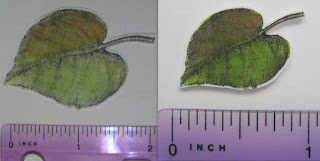 Colored Pencils:
I had the highest expectations from the colored pencils. However, they did not give good coverage and the small scratches from the sandpaper were extremely obvious with the color over them. They were my least favorite of the materials I tried. I used a variety of brands, including Caran d'Ache, Faber-Castell, and Derwent. Some of the pencils were better than others, but none of them worked as well as I'd expected.  It looked a bit better post-shrinking, but the scratches were still visible.

Pens:
Next I got some pens from my scrapbooking stash. I loved the way the American Crafts Slick Writer glided color onto the plastic. The Marvy Uchida Le Plume and Le Plume II were not quite as even, but were satisfactory.

Watercolor Pencils:
For my final leaf, I tried Staedtler watercolor pencils. I colored lightly, then wet a small brush to push the color into place.  This ended up being my favorite.

I've always used cookie sheets or pie pans for shrink plastic, so I was surprised that the directions say not to shrink these on metal.  Instead, they recommend cardboard, teflon, parchment paper, or vellum.  I used cardboard.  The directions say to preheat to 300-350 degrees, but the lower the temperature the less distortion will take place.  I preheated the oven to 300 degrees. I turned on the oven light and watched.  Within a minute, the leaves started to shrink.  They did not curl, but instead formed little cones!  After another minute, they began to flatten back out.   I did not need to press them flat at all.

So, would I recomend Grafix Shrink Film in opaque white?  Yes, but with reservations.  The items shrink quickly and easily with minimal distortion, the plastic is easy to cut by hand or punch out, and a variety of media can be used.  However, the opacity of the white plastic means that some colors come out very dark and no matter how lightly you sand, the scratches are visible with certain media.  I'll have to try this product again in the future using the recommended markers and paints.
Posted by Cindy deRosier at 5:00 AM