I'm a huge fan of quesadillas. My favorite quesadillas have beef, black beans, tomatoes, corn, sweet bell peppers, caramelized onions, and lots of cheese inside, are cooked on the stove until crispy and golden, and are served with guacamole and sour cream. Delicious. Strip away everything except the tortilla and the cheese and a quesadilla is still really tasty. Take that humble quesadilla and make a few tweaks and now it's a friendly octopus. 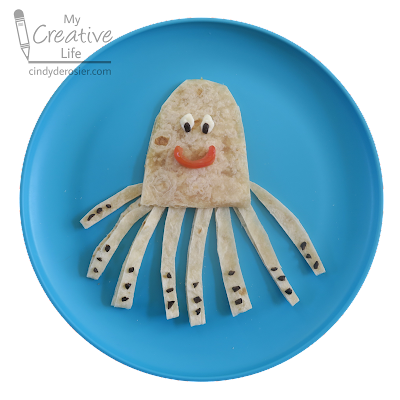 Sprinkle a conservative amount of shredded cheese onto half of a large tortilla, then fold the empty half over the cheese side. Cook the quesadilla until the cheese melts. Transfer it to a plate.
Use kitchen shears to cut the quesadilla into three sections, as shown below. This is much more difficult with a knife; use shears. 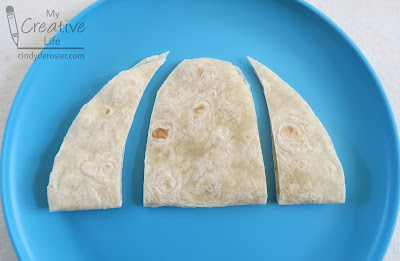 Cut each of the side portions into fourths lengthwise. 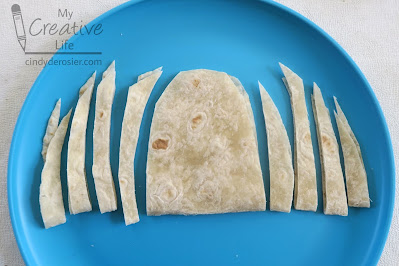 Slide those pieces under the bottom of the center section. 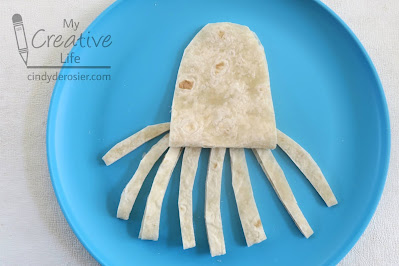 Use a sharp knife to cut a tomato smile and place it on the octopus' face. Then cut two tiny pieces from an olive. Put two drops of sour cream on the face for eyes (I used the tip of the knife). Place the olive bits into the sour cream to complete the eyes. 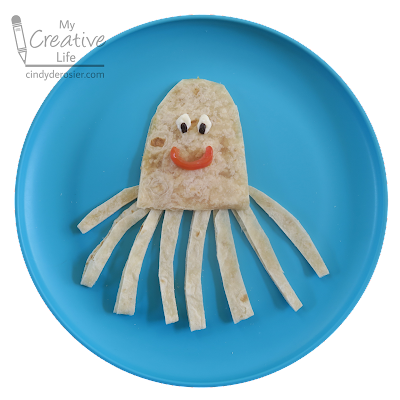 I thought I was done at this point, but Trevor said the octopus needed suction cups. So I cut more olive bits and lined them up along the tentacles. I'm not sure it's worth the extra effort, but I'll leave that up to you.

Either way, it's a lot of fun and definitely makes lunchtime memorable.
Email ThisBlogThis!Share to TwitterShare to FacebookShare to Pinterest
Labels: Crafts for Kids, edible, octopus, quesadilla