How to Draw Duo, the Duolingo Owl

I started learning Spanish in 7th grade, way back in 1985. I continued with Spanish all the way through 12th grade and did well enough on the Advanced Placement test to end up in an advanced Spanish composition class during my freshman year of college. It was very challenging. Because it was so difficult and I already had more than enough language credits, I never took another Spanish class.
I rarely used my Spanish and my near-fluency disappeared. It was frustrating but not surprising; you can't expect to remain good at something if you don't practice it for 30 years. In January, I decided to relearn Spanish and started using Duolingo. I spend an average of 30 minutes a day, 7 days a week, and it's amazing how much I've regained. It's fun and motivating and I'm excited to keep at it and eventually complete the entire Spanish tree.
Yesterday, I hit a milestone (more on that below) and drew a celebratory Duo (the Duolingo mascot) to mark the occasion. He's easy to draw. Give it a go! 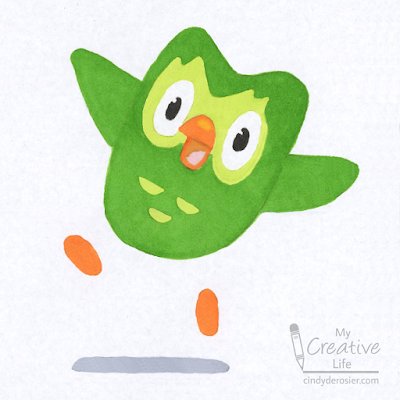 How to Draw Duo, the Duolingo Owl

Begin by drawing Duo's shadow at the bottom center of the page. It looks like a worm. This will help you anchor the rest of the drawing.
Now draw Duo's body. Duo is all curves with no sharp edges, so keep everything rounded. 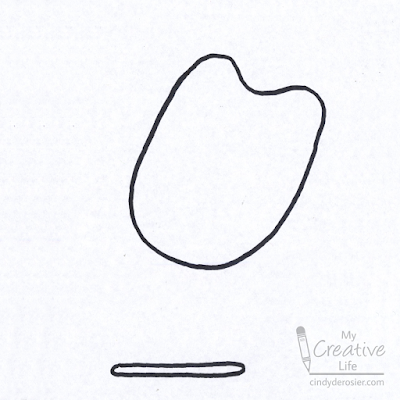 Duo's feet look like Tic-Tacs and are disconnected from his body. Draw them between his body and the shadow. Then add wings. Keep them rounded! 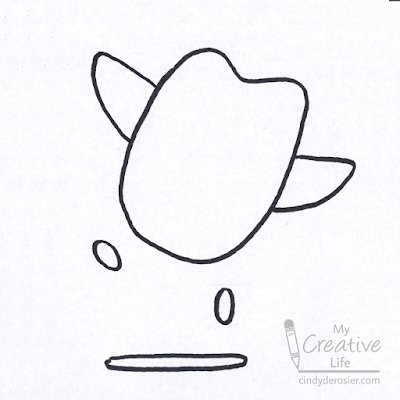 Duo's beak goes in the center of his face. It consists of a semi-circle on top and a Tic-Tac on the bottom, with a curve for his tongue. Add Tic-Tac eyes on either side of the beak. Leave a circular gap at the top left of the pupils; these are white highlights. 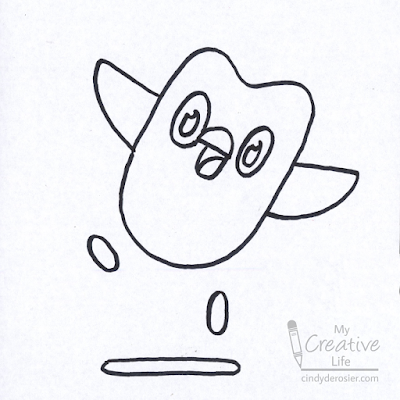 Now outline Duo's face. The curve starts and ends at the sides of his beak, follows his eyes, and has two feathers over each eye. Add three semi-circles to Duo's belly. 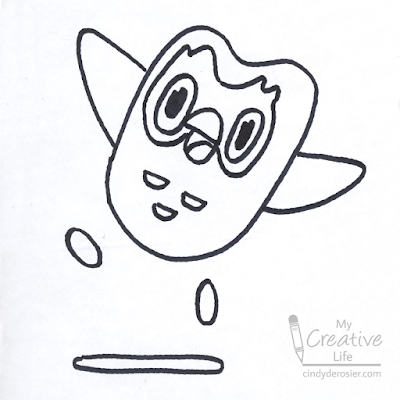 So what is my Duolingo milestone? Yesterday I celebrated a 100-day streak, with no missed days. 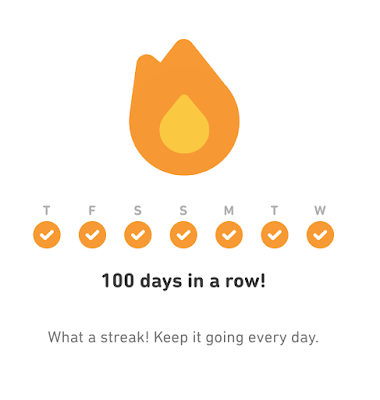 To be honest, it's been easy. I really enjoy my daily practice. Of course, I imagine it will be much more difficult to maintain my streak when we are eventually traveling again. But I'll deal with that when it comes. In the meantime, I'll be happily practicing from home.