I'm pretty sure my 2-year old niece doesn't read my blog, so I'm ok sharing her present early. Actually, it's a container that holds her presents, much like a gift bag. So all I'm really doing is showing you a form of gift wrap... no surprise spoiled. 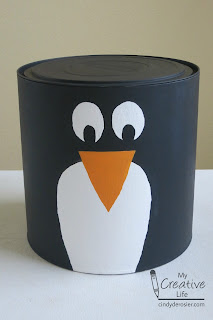 Do you recognize the container? I know it's hard with no sense of scale in the photo, but it's pretty large - almost a foot tall and a foot in diameter. 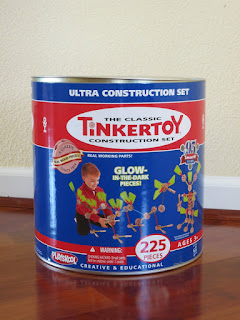 When Trevor moved his Tinkertoys out of the original package, I grabbed the container and set it aside. I didn't have a plan, but I figured I could do something with it. Then I realized it was big enough to hold Allison's presents and then serve as a container for toys afterward. I got to work.

The first step was a coat of gesso over the entire container, including the metal lid. I thought for awhile and decided that the container would be a penguin. So I painted most of it black. 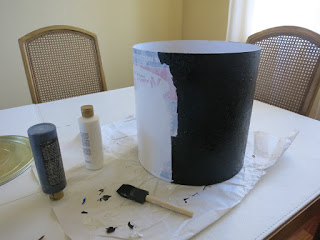 I painted one section white. In retrospect, I should have left the eyes and beak areas white too, as it took a couple of coats to cover the black. 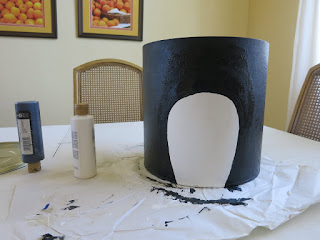 I added the eyes and beak. I wanted to add a spray sealant, but we've had non-stop rain, which is not compatible with sealants. If I can't get it sprayed before Christmas, I'll wrap a container of sealant for my sister to deal with. And if it doesn't get sealed, it's no big deal. In fact, it might be fun for Allison to repaint it if the penguin gets damaged.
Email ThisBlogThis!Share to TwitterShare to FacebookShare to Pinterest
Labels: Crafts for Kids