‘Thanks a Minion!’ Card

Trevor's Cub Scout den needed to make thank-you cards for some wonderful people who have helped us out, so I brought the supplies for 'Thanks a Minion!' cards to a recent meeting. 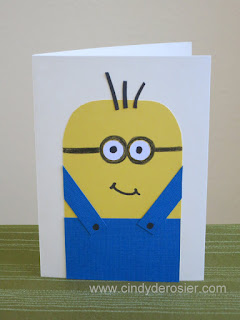 
I explained to the Scouts how I made my sample. I started with a yellow rectangle that was slightly smaller than the card base, then used the scissors to round off the top. I added a blue rectangle that was a little less than half the height of the yellow and glued it in on top of the yellow. Then I cut two smaller rectangles from the scrap, glued them where the overall straps go, and trimmed the edges so they were flush with the yellow Minion. I punched two circles from white cardstock, glued them to the Minion and used the Sharpie to add pupils and glasses. I made dots for the overall buttons. Then I glued the minion to the card base and glued on some black cardstock hair.


The boys got right to work, with plenty of chatting and checking out each other's progress. 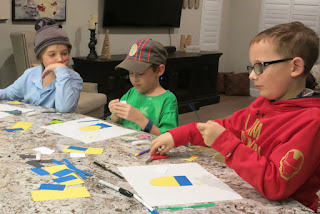 My #1 rule when crafting with kids is to encourage creativity. If I wanted all the cards to look like mine, I could have just made them myself. I was thrilled that the boys each took their cards in totally different directions. Aren't they adorable? 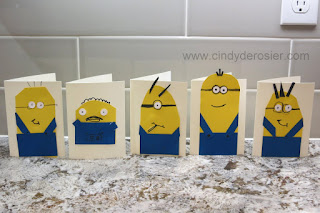 Trevor's card is second from the right. I love that he made his Minion extend beyond the height of the card base. So creative. We'll need a slightly larger envelope for his card, but that's no problem. Making envelopes is easy. Good work, Scouts!
Email ThisBlogThis!Share to TwitterShare to FacebookShare to Pinterest
Labels: Crafts for Kids, Cub Scouts