Trevor and I continue to have a great time together learning about the 50 states using the Little Passports USA Edition! Our next virtual trip took us to South Dakota, home of (among other things) the world's largest collection of mammoth fossils. Here's Trevor building the model of a mammoth. 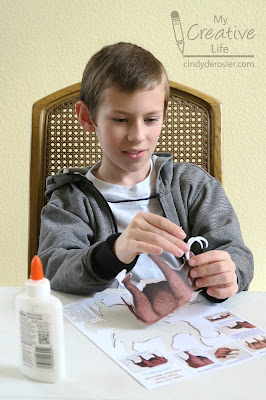 Trevor thought it would be funny to pose the mammoth as though he were studying the Little Passports state journal. He was right. It was funny. 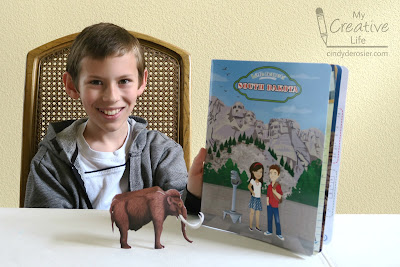 We read about Mt. Rushmore and learned that each face is 60 feet tall. It took 14 years to carve them! After a matching activity about the four presidents on Mt. Rushmore, we solved a rebus about Badlands National Park. (I just had a flashback to when I was in 5th grade. Our class put on a play called 'Badlands Ballyhoo.' I remember literally nothing about it except the title and that we had a lot of fun. Any elementary school friends reading who can help spark some memories?) 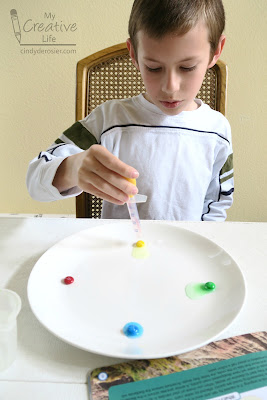 We left the plate untouched for 15 minutes. When we returned, it was evident that the 'rain' had caused erosion. The candies (representing rocks) that got the most rainfall dissolved more than those with less rainfall. 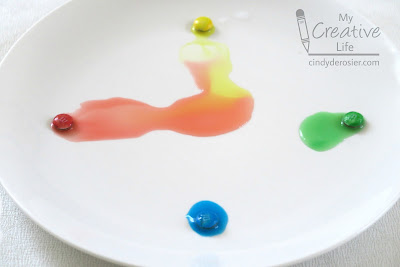 Trevor solved a dot-to-dot activity about the Lakota and Cheyenne natives of the Black Hills. Then we solved a logic problem about Belle Fourche, a small town with the nickname of "Center of the Nation" because it is near the geographic center of the US. We did a fill-in puzzle about L. Frank Baum, who wrote The Wizard of Oz while living in Aberdeen, SD. I'd always assumed he'd written it in Kansas, but apparently I was wrong! We read about the famous events in South Dakota history and marveled at the Corn Palace, first built in 1892. It's on our must-visit list when we eventually make it to South Dakota. I love quirky stuff like that.

We did another logic activity, this time inspired by Custer State Park. It is home to bison, pronghorn, mountain goats, deer, elk, and burros. The burros are famous for standing in the road to stop traffic and beg for treats. Pretty smart, those burros!

Speaking of treats, the South Dakota recipe was for kuchen. Yum! 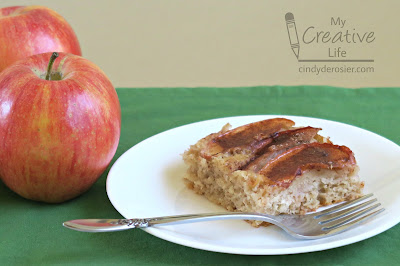 We had such a good time on our virtual journey through the Mount Rushmore State and look forward to eventually traveling there in person. Thanks again, Little Passports!