First, let me state the obvious: I don't have a toddler. But I used to have one. Before he turned three, Trevor had visited two foreign countries (Canada and Mexico), three states (Alaska, Hawaii and Washington), and numerous places within his home state of California. As I've been preparing for my presentation about educational family travel at Pinners Conference, I've gone through my packing lists, journals, and scrapbooks and have been reminiscing with Steve about our baby/toddler travel experiences. I thought I'd share with you some of the things that worked for our family to make travel with our toddler as pleasant as possible. 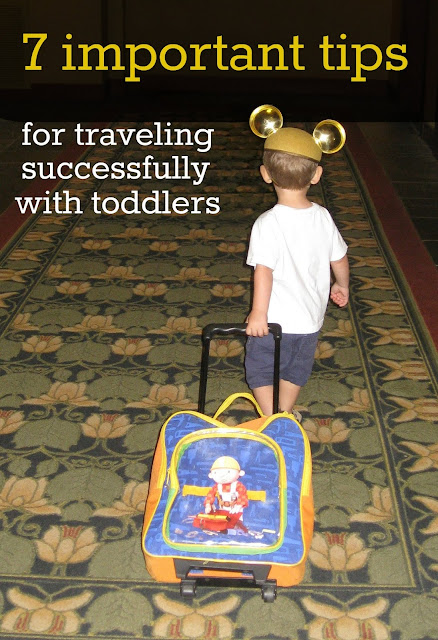 I took this photo of Trevor in 2008 when he was two. I remember thinking what a great traveler he was already, confidently navigating the hotel hallways while pulling his own suitcase. That brings me to Tip #1.

#1 Give Your Toddler a Suitcase

Yes, it's one more thing for the adults to carry when the toddler randomly decides he is done pulling his own suitcase. Fortunately, that almost never happened with Trevor. He loved his suitcase. Having his own suitcase (a hand-me-down from his beloved Big Cousin, Timothy) let him have some say in what toys to bring, gave him something to do while I was unpacking at a hotel, and made him feel important and included. I had him watch me pack his essentials into his suitcase at home, then showed him how much space was left for books, stuffed animals, and other small toys. When we'd get to our destination, I'd give him a drawer or other location so that he could keep busy unpacking (and thus stay out of my way while I unpacked everything else).


Perhaps you heard about the passengers stuck on a train in Oregon for 37 hours and their efforts to cobble together homemade diapers after parents on board ran out? It goes without saying that you do not want this situation. We had our own diaper nightmare during a family reunion in San Diego. Trevor was on antibiotics for the first time and they affected his tummy (to put it delicately). He blew through our full supply of diapers for a 5-day trip (based on a worst-case scenario plus 10%) within 2 days. Steve went out at 4:00 am to try to find a place to buy diapers and discovered our rental car had a flat tire. Fun times. It may be annoying to bring home extra diapers you'd packed, but not nearly as annoying as having no diapers and no way to get diapers.


#3 Pack the Thermometer and Infant/Child Medications


Even if you're sure you won't need them because your kid is never sick, please do yourself a favor and pack both the thermometer and medications. The advice nurse is going to want to know your toddler's temperature when you call in the middle of the night (ask me how I know). You may think you can buy medicine if necessary, but that is not always the case. When Trevor had a major allergic reaction while camping, there was no nearby Walmart to get children's Benadryl. And when your child's face is inexplicably swelling, you'll wish you had the antihistamines on hand. Or the meds to bring down their fever. Or whatever else randomly happens while traveling. It's definitely better to be safe than sorry.


When traveling, it is not convenient to stop everything in the middle of the day for naptime. Know what else isn't convenient? Temper tantrums. Know that your toddler is going to need sleep when you want to be out exploring, or a meal at a time that makes no sense to you, or a diaper change as soon as you board public transportation. (Don't even get me started on the horrors of traveling with a very recently potty-trained toddler who gives you 15 seconds of warning before it's too late). Do what you can to plan your activities to be flexible and accommodating, and definitely plan for naps, quiet time, downtime, and routines.


I am not a fan of car trips. I don't like spending time getting to where we're going; I just want to be there already. I abhor sitting in the back seat to entertain a bored and squirmy toddler who wants out of his carseat and doesn't understand why he's stuck in the car. Therefore, you'd think that I'd advocate plane travel with toddlers. And I do... if you're crossing oceans or headed somewhere for such a short time that it would be impossible to drive there and back. But if given the choice of a 1-hour flight compared to a 6-hour drive, I'm going with the drive if there's a toddler involved. Driving allows you to overpack (like diapers - see Tip #2) and bring along all sorts of other things that you'd leave home if you were flying. Driving allows you to stop and change a diaper whenever you want. (Ever changed a diaper in an airplane bathroom? *shudder*) Driving allows you to stop at parks and rest stops and get out and run safely and without bothering anyone. Driving means not having to deal with setting up your carseat on the airplane, or checking the stroller, or convincing security that they need to let you carry milk on the plane, or begging your recently potty-trained child to just go potty now before we get on the plane because the captain isn't going to let us out of our seats to go until the plane is at cruising altitude and even then there might be a line.

In my opinion, trains are the middle ground between cars and planes when it comes to toddler travel. There's usually room to move around and no need to stay buckled up every second. There's plenty to watch and places to explore. Diaper changes are still a problem, but so much better than planes. But, you can't stop when you want to and you can't seriously overpack. Trade-offs.


I would have lost my mind on some of our early trips if not for two things: new toys and tiny snacks. First, new toys. Before traveling, I would wrap up unfamiliar toys (a combination of new items, toys borrowed from friends, and old things Trevor hadn't seen in a long time). Every 30 minutes or so, he'd get to unwrap something.

I'm a big fan of tiny snacks (Cheerios, raisins, Puffs, etc) for toddlers because picking things up one by one takes a lot of time. Tiny snacks can double as an activity when you're stuck in a car or a plane, as well as once you've reached your destination and have to keep your toddler entertained during waits.


#7 Reserve the Crib Ahead of Time


Hotels and cruise ships have cribs for you to use. However, they do not have enough for more than a handful of families to be using them at the same time. You don't want to find out once you arrive that someone else is using the crib you'd counted on. Call ahead and reserve a crib if your toddler needs one.

I am so glad that we traveled while Trevor was young, because I think it's helped develop him into the great traveler that he is now. Steve and I have so many good memories of those early trips as a family of three (and we're doing our best to block out the bad memories - like that San Diego trip!) Traveling with a toddler is not for the faint of heart, but nothing about life with a toddler is for the faint of heart, right? Any tips to add? I'd love to hear what has worked for your family.
Email ThisBlogThis!Share to TwitterShare to FacebookShare to Pinterest
Labels: Travel Tips