I already have a bachelor's degree (International Relations) and a master's degree (Education), but if I ever go back to college it will be in Graphic Arts. Despite a lifelong love of everything having to do with art and design, I never took any classes in those departments. I really wish I had. It took me a long time to learn what I know now, things that are probably covered the first day of a design class.

Anyway, I say all this because I am getting increasingly confident with some aspects of design, to the point that I have been making logos and doing basic design work for friends. I have a lot more to learn (although what that is, I'm not sure), but I feel good enough about my skills to help out friends who need it. Most recently, I made this:

I made it for my friend, Doug, who is a member of the Belmont Model Railroad Club (obviously). Doug and I go way back. Thanks to the miracle that is Facebook, I found a photo of us together at a 4-H conference in 1989. That's Doug on the left with his arms out. I am the blonde with the dark suit. (Because it's perfectly normal for 17-year old girls to travel in black business suits.) The other two are Michael and Piper, for the record. I have no idea where we are posing, but it's probably somewhere in Washington DC. 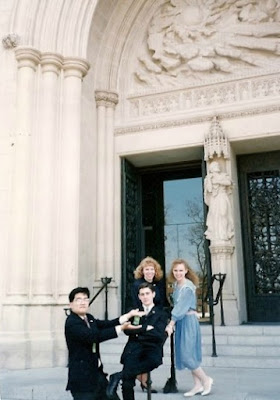 Anyway, Doug needed a logo for the model train club based on this photo: 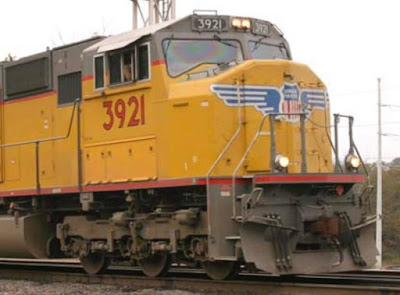 I made the logo using PicMonkey. I know I talk about PicMonkey all the time, and I apologize if I come across as some sort of MLM cult member who won't shut up about this fabulous product that you should definitely buy, but I use PicMonkey daily and love it. Click the banner for a free trial.

Anyway, the first thing I did was to convert the photo to black and white. Then I removed the background using the Clone tool. I removed the numbers from the side of the train and from above the windshields.

Then I used the Posterize tool. I adjusted the slider to get the minimum number of colors to still give good definition. In this case, it is 5.

I opened a 2000 x 2000 blank canvas, then added the posterized train as an overlay. I flipped the image, then added the initials of the club (BMRC) to where the numbers had been in the photo. I played around with text options and locations before choosing a simple text from a font (Special Elite) that is part of PicMonkey's library. 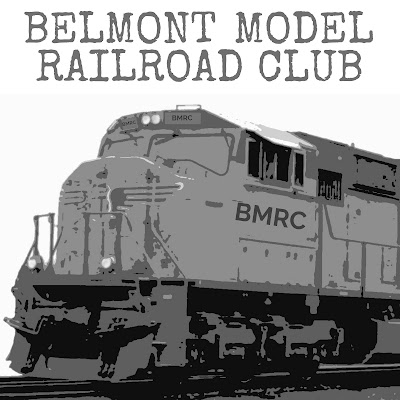 Finally, I added a dark rectangle behind the text. I sampled colors from the train so that I wasn't adding additional colors to the logo.

I sent the files to Doug and he was happy. Hopefully the rest of the Belmont Model Railroad Club will be too.
Email ThisBlogThis!Share to TwitterShare to FacebookShare to Pinterest
Labels: logo, PicMonkey