Today I have a giraffe craft for you. (Try saying "giraffe craft" quickly ten times. I sound like a yapping dog after the third "giraffe craft.") My goal was to design a realistic, simple, and kid-friendly giraffe project that could accompany a report or classroom study of giraffes (as opposed to a whimsical giraffe just for fun). I accomplished this by looking at a lot of images of giraffes before I started and as I worked. I learned a lot in the process, including a new vocabulary word: ossicone. 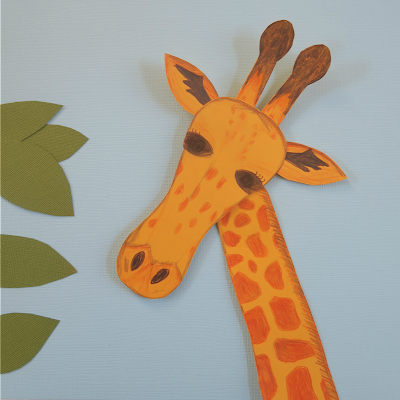 
Start by cutting out the shapes you will need for the head: an elongated footprint-shaped face, two ossicones, and two ears.

Studying the photo of the giraffe, use the lightest color to barely sketch the facial features. Ignore any markings for now. Use the other pencils to darken the eyes, nostrils, ossicone tops, and inner ears. Shade the giraffe lightly using all three pencils, again using the photo as a reference. 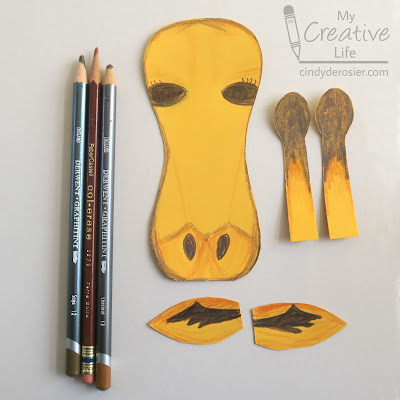 Cut a long neck from the same construction paper. It should taper slightly. Using the lightest pencil, draw the giraffe's spots. Observe that the spots get larger lower on the giraffe's neck. Use all three pencils one at a time to draw short hairs along the length of the back of the neck.

Glue the neck to the light blue background paper, trimming it so it's flush with the bottom of the paper. Add glue only to the middle of the back of the head and attach it to the neck. By leaving the ears and mouth area without glue, you can bend them forward slightly to achieve depth.

Cut green leaves and glue them to the edge of the paper.