Dogs communicate with barks, yips, and growls. Cats purr, meow, and hiss. Rabbits do most (though not all!) of their communication non-verbally. Once you get to know a rabbit, you'll be amazed how much he can communicate to you via ear position, body position, and facial expression.

Trouble picks up his water dish and clanks it against the food dish to tell me it's empty, bonks his nose into my leg when he wants me to pet him, and dances back and forth in front of the kitchen gate when he wants a treat. None of those are especially subtle. His facial expressions, on the other hand, are more nuanced. At least they are until I try to get a picture. Then 9 times out of 10, I get this expression: 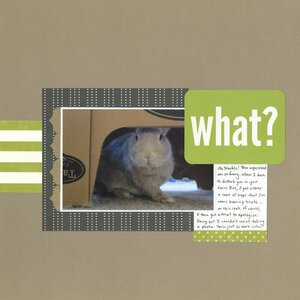 Can't you just see him asking, "What do you want? Why are you bothering me?" Of course, he doesn't dare ignore me, because it's possible that I am interrupting whatever he's doing to give him something tasty and it would be a tragedy of epic proportions if he did not know about this treasure immediately. It's funny - for an only rabbit, you wouldn't think he'd be so paranoid about eating quickly so that no one else can take his food. But he is. In fact, when I give him a treat, most of the time he will run off with it with a foot flick to remind me that the food is HIS and that I should not even consider trying to get it from him. I then remind him that I gave it to him, so there's no reason to think I'd take it back. We've been having this 'conversation' daily for 8 years. Silly rabbit.
Email ThisBlogThis!Share to TwitterShare to FacebookShare to Pinterest
Labels: Bunny Week, Layouts, Rabbits, Trouble