One of my favorite art blogs is Making Art Together, the blog of the Eric Carle Museum of Picture Book Art. In this post, Art Educator Sara Ottomotto talked about using the small scraps generated in the Art Studio for future projects in the space. The post inspired me to use my own small scraps for a project, creating a scrap paper photo frame. 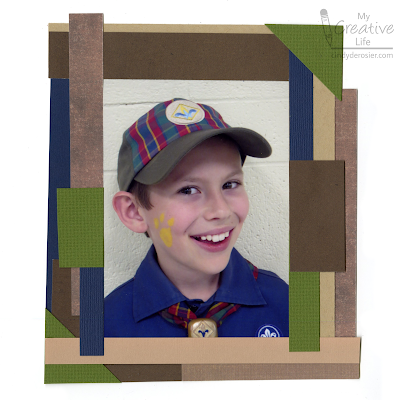 I started with a 4" x 6" photo (a duplicate of a photo from 5+ years ago that I already used on a layout) and a pile of scraps in browns, tans, greens, blues, and reds. My rule for choosing the scraps is that each had to be smaller than the photo in at least one direction. 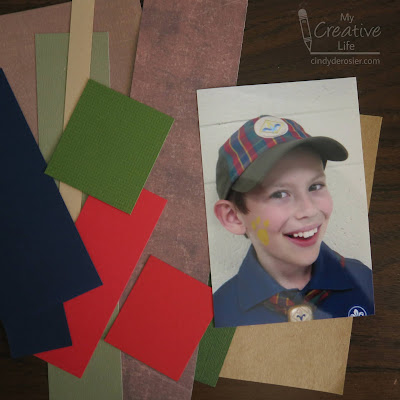 I started by adding tan strips behind the edges of the photos to make a mat. Then I repeatedly layered more pieces on top. I didn't give it much thought - I took a piece, added glue, and put it down where I thought it would look good.
As you can see, I didn't use the red at all. I kept most of the structure browns and tans with some blue, and used the green for pop. The two green triangles on opposite sides help bring the eye in toward the photo instead of out beyond the frame. The two thicker rectangles frame either side of Trevor's face to keep the focus where I want it.

While the resulting frame is very haphazard, I really like it. I wouldn't have expected something asymmetrical with uneven edges and imperfect cuts to appeal to me so much. I'm so glad I tried this! I definitely want to experiment with this technique again.