Today's project is the third in my series based on crowd-sourced responses to ten questions. For this one, I asked my friends to name a popular children's book. Goodnight Moon (affiliate link here and below) was the top answer by far.
In designing this craft, I wanted to make something that was interesting and recognizable from Goodnight Moon, yet not so challenging that the only children who could make it had already outgrown the book. There are a lot of ways to adapt this to make it easier or more challenging to match the abilities of the child(ren) making it. For example, adults can pre-punch the shapes if little hands aren't big or strong enough to punch. You can switch out the tape for paper (although kids LOVE playing with tape). You can skip the stripes on the yellow curtains, or draw them more as scribbles.

Cut the blue cardstock to approximately 10" square. Punch out one white moon and as many white stars as you'd like. 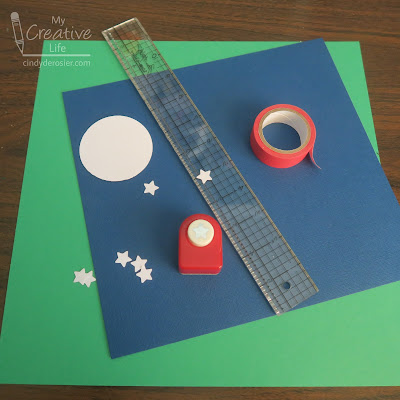 Glue the moon to the blue paper, slightly left of center. It should not be too close to the left edge where the curtain will go. Glue the stars randomly where you want. Again, anything too far to the left will be covered.
Add four vertical strips of tape to the blue cardstock: one on the left side, one on the right side, and two evenly spaced between them. Tuck the edges of the tape behind the blue cardstock. 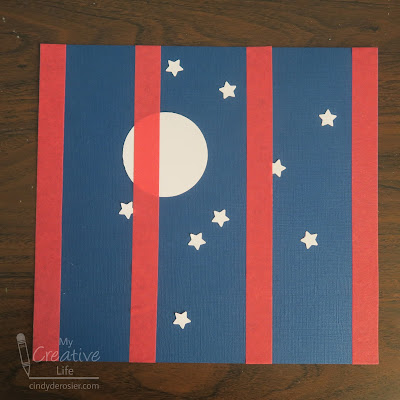 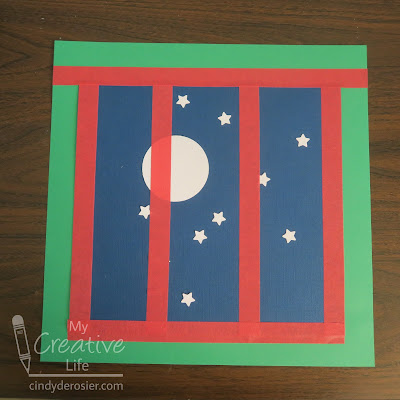 Cut a rectangle of yellow cardstock that is approximately 11" long. Cut a second piece of yellow that is shaped like a large wedge of pie. These two pieces will be the curtains. Place them on your craft to see if you like their size and adjust as necessary. Then draw narrow green lines on the curtains. It's easiest to use a fine-line pen and a ruler for the rectangle and to freehand the wedge. 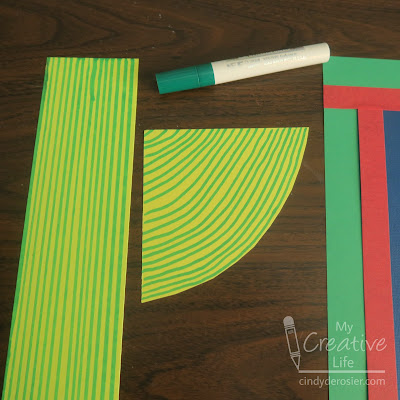 Glue the curtains in place. That's all there is to it!

Not only would this be a fun craft to do WITH kids, it would be great to do FOR kids. Pop this into a frame to hang in the nursery. Or create a smaller version to use as a card. There are lots of possibilities.
Email ThisBlogThis!Share to TwitterShare to FacebookShare to Pinterest
Labels: book, construction paper, Crafts for Kids, Goodnight Moon, literature, moon, star