This penguin project is the seventh craft in my series based on crowd-sourced responses to ten questions. Can you guess what the question was? 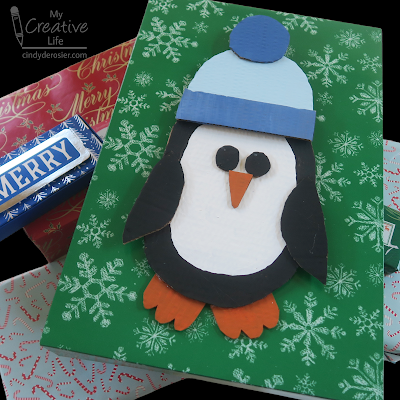 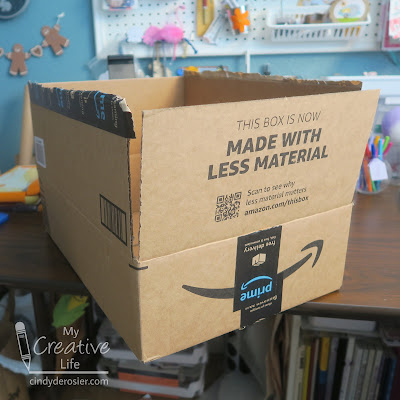 I asked, "Name something you recycle." I chose the answer of cardboard boxes as the inspiration for my craft. And, in fact, that specific box pictured above helped guide my thinking. When I saw 'made with less material' printed on it, I guessed (correctly!) that it would be easy enough to cut into shapes with scissors. Standard cardboard is best cut with a utility knife, which is great for straight edges, but not for cutting out small, circular items. I designed today's penguin to test how difficult it would be to cut rounded shapes from this thinner-than-usual corrugated cardboard.
The answer? Not difficult at all! In no time, I had cut out an oval body, circular eyes, a triangular beak, a pair of wings, a pair of feet, a hat, the hat's trim, and the hat's pom-pom. 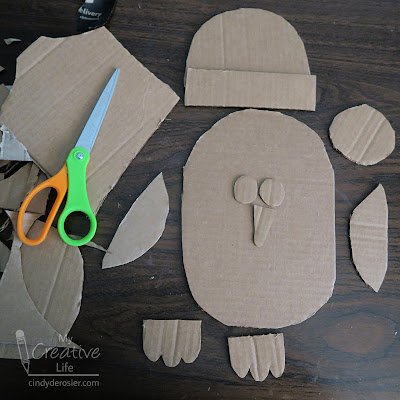 I painted all the pieces with acrylic paint and let them dry. Incidentally, I thought it was really interesting how this thinner cardboard reacted to the paint. Look at the slightly lumpy texture. That didn't change when the paint dried. 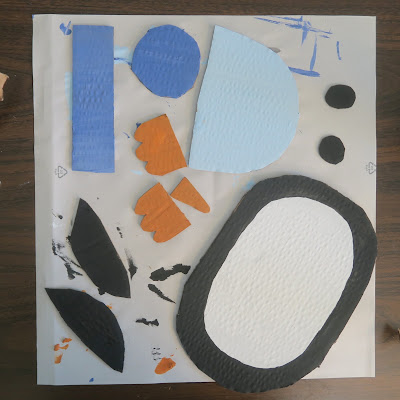 Before using the hot glue gun to assemble everything, I started by figuring out what my base layer would be. It's not the body - the feet are tucked behind the body. If I glued the feet to the body and then the hat and facial features on top of the body, the finished project wouldn't lay flat. I would need to prop up the gaps caused by the thickness of the cardboard.
So I cut a piece of cardboard (marked by the black arrow below) that was slightly narrower than the penguin's body and positioned it so that it left room for the feet yet extended beyond the head. I glued it in place, then cut a second rectangle (blue arrow) to fill the gap created between the base and the hat. 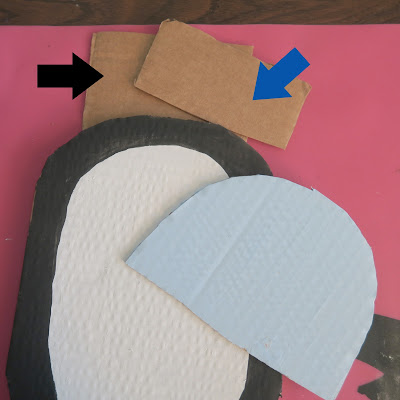 Here's how my penguin looked after I glued the rest of the pieces in place. 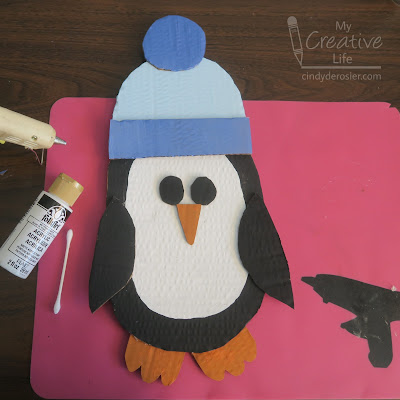 And here's how it looked after I glued it to a robe-sized gift box. I plan to tuck a gift tag under his wing.

I love that I repurposed the cardboard box that the gift came in to decorate the gift box I used to wrap it! The recipient can use the box again, giving the cardboard box an even longer life.
Email ThisBlogThis!Share to TwitterShare to FacebookShare to Pinterest
Labels: animal, bird, cardboard, Christmas, Crafts for Kids, Folk Art, paint, penguin, recycle, winter