Back in January, I made a layout with pictures I took at 1:11:11 on 1-11-11.  Of course, I couldn't resist taking pictures at 11:11:11 on 11-11-11!  Because it was Veteran's Day, Trevor was home from school.  We were leaving for Disneyland the next morning, so I was busy packing while Trevor was getting started on the work from his Independent Study.  I made sure the camera was nearby and set a timer so that I wouldn't miss 11:11.  I love this quick little glance at our life when the date and time was nothing but ones. 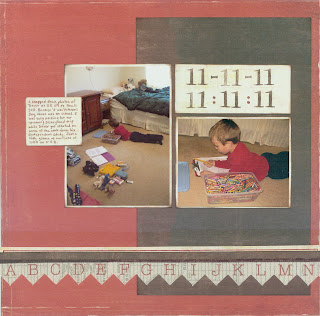 This layout is based on this sketch by Lead Fiskateer Rebecca. 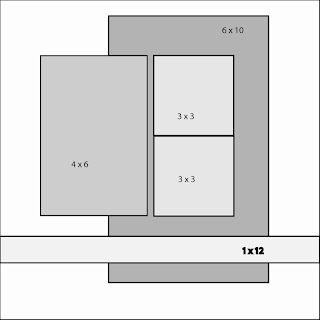 The sketch was quite simple, which worked well because I wanted a casual, effortless look for this layout.  I decided to stamp the title, starting with a 1 and leaving spaces for the dashes and colons.  Only problem- I went through every single stamp I own and not a single dash or colon.  Definitely a 'make it work' moment.  The dash was easy- I found a smaller alphabet and turned an "i" on its side.  I didn't have a single stamp that would function as a colon.  I finally thought of something- I used my Crop-a-Dile to punch two tiny holes next to each other, then stenciled the colons. 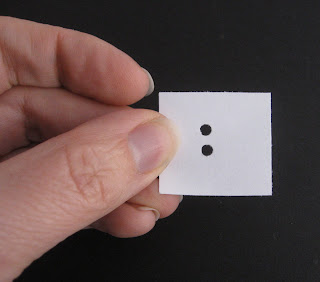 I had another 'make it work' moment when it came to the banner.  Here's how it looked originally: 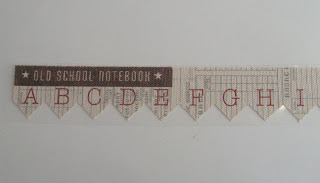 The "Old School Notebook" message seems really weird to me and not at all what I wanted on my page.  But there wasn't a good way to cut off just the alphabet that I wanted.  So I ended up using a pen to color the entire top brown, then laid a thin strip of the brown patterned paper over the center to cover the words.  The scan doesn't show it well, but I stamped some detail stitching on the brown.