Last week I shared my Snowman Gift Tags. As you'll recall, I used black Enamel Accents for the face (a success) and initially used white Enamel Accents on the hats (definite failure). For the final product, I switched to Decorative Snow for the hats.

This led me thinking- how can I use white Enamel Accents? How about as snow? Worth a try!

I took a plain white tag and put little dots of white Enamel Accents all over it, then set it aside to dry. Once the tag was dry, I rubbed blue ink over the top, then used sandpaper to reveal the white dots. Cute! I hand-cut an itty-bitty snow drift and snowman and glued them on. The finished tag: 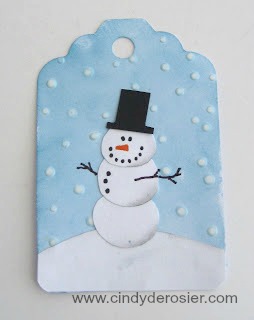 I love everything about it except for the long drying time. I thought I might be able to achieve the same look using wax resist, which would have no drying time. I took a white crayon and put little dots all over a plain white tag. I covered it with blue ink and then scratched off the wax to reveal the white snow. I cut out another snowman and added it to the tag. Here's the wax-resist version: 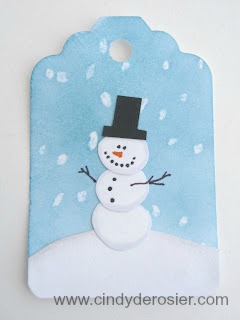 Still cute, but not nearly as nice as the Enamel Accents. The 'snow' is quite irregular and I missed a bunch of spots.  While it was easy to see the little dots of Enamel Accents while I was working, it was very difficult to see where I'd dotted the crayon. And it was impossible to make consistently round dots.

If I were in a hurry, I'd definitely use the crayon version, but I think the Enamel Accents is the winner!
Posted by Cindy deRosier at 5:00 AM