Our "Coat of Many Colors" Card

One of my best friends (Trevor's godmother, Jonna) just celebrated her birthday.  As a gift, we bought tickets for her to join us for an upcoming production of "Joseph and the Amazing Technicolor Dreamcoat."  Since there wasn't anything to wrap (the tickets are at will-call), we wanted the card to help reveal the present.  So Trevor and I made a very colorful coat-shaped birthday card.

In case some of you are not familiar with the plot, "Joseph and the Amazing Technicolor Dreamcoat" tells the story from the book of Genesis of Joseph and his coat of many colors. Joseph is the youngest of 12 brothers and his father Jacob's favorite son.  Jacob gave Joseph a beautiful and colorful coat, which made his brothers extremely jealous.  When Joseph mentioned his dreams that show he was destined to rule over them, his brothers' hatred of him intensified to the point that 10 of them plotted to kill him.  Their oldest brother convinced them instead to sell Joseph into slavery and make Jacob believe Joseph was dead.  It's a great musical and we're all excited to see it.

To make our card, we started by folding a piece of white cardstock in half and cutting out a coat shape (keeping the fold intact).  We heated up the warming tray and got out the broken crayons. 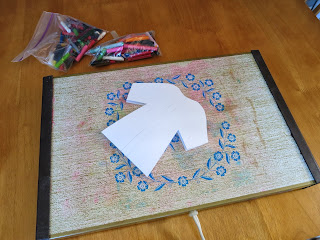 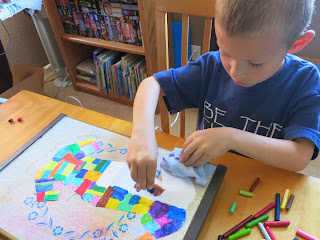 When the card was covered, we folded it back up and added our message inside.  Here is what the front looked like: 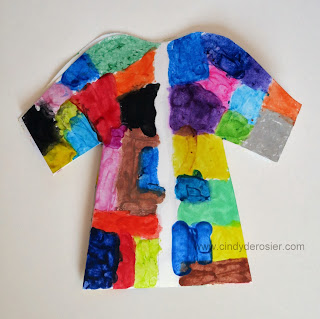 And here is the back: 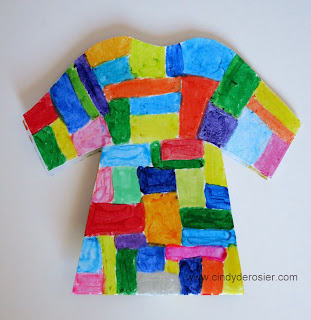 It only took Jonna about 10 seconds to figure out that the card was supposed to be a technicolor dreamcoat!  I was really impressed.  It was such a fun way to reveal what the gift would be. Fingers crossed that the production is as fabulous as the other shows we've seen from this theater company!
Email ThisBlogThis!Share to TwitterShare to FacebookShare to Pinterest
Labels: Cards, Crafts for Kids