My friend Nancy and her kids were in California last week. We'd been tossing around ideas of how to spend our day together when Nancy mentioned how much her kids love reading about our family cooking competitions. I suggested taking advantage of the beautiful weather with a leisurely park visit before returning to our house to do a cookie bake-off.

To prepare, I mixed up a double batch of standard chocolate chip cookie dough before they arrived, stopping just before adding the chocolate chips. Then I dug through our pantry to pull out a bunch of possible mix-ins and set them out on the dining room table. 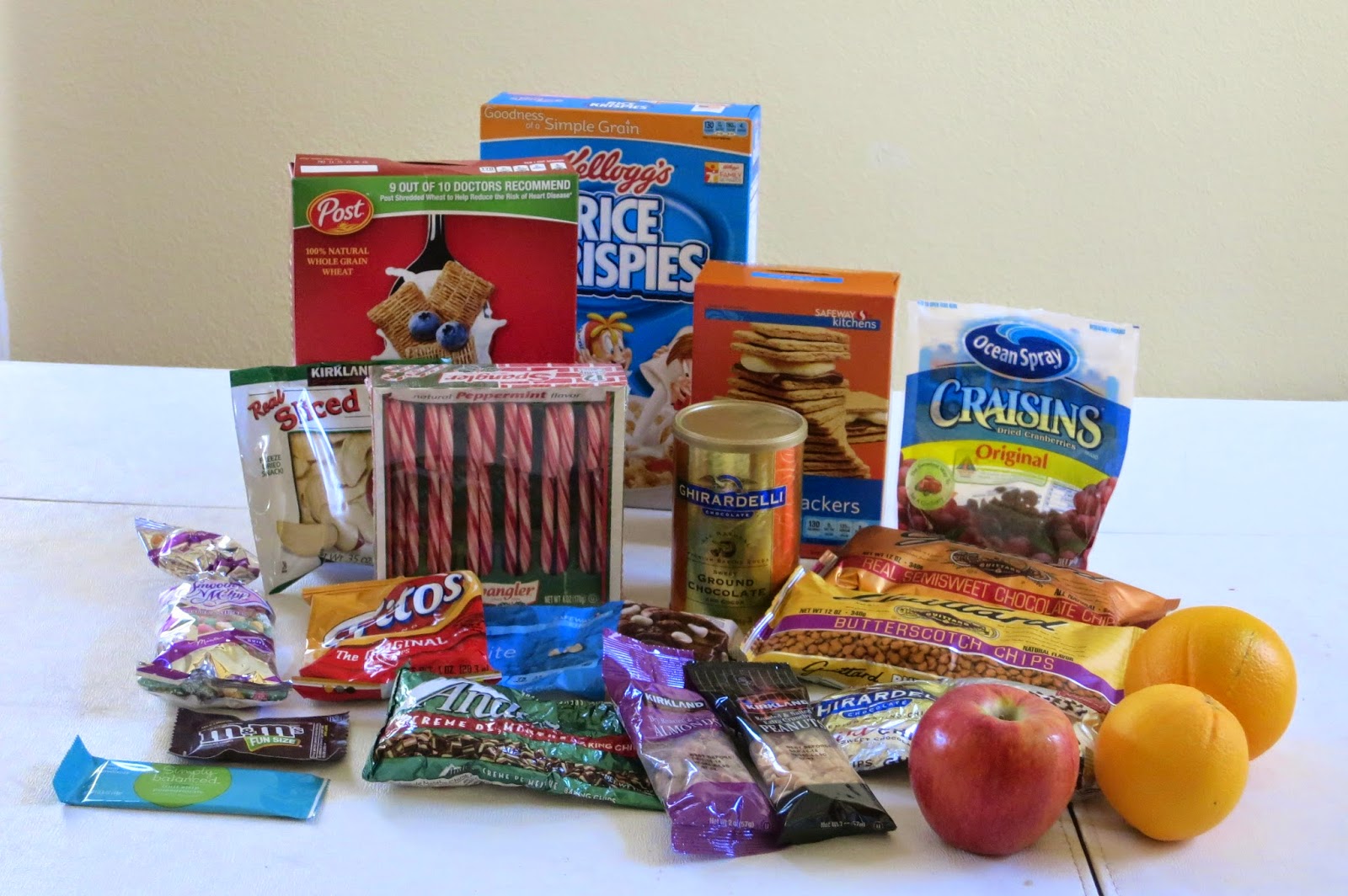 I kept everyone out of the dining room until after we returned from the park. Then I explained the rules of the competition and unveiled the pantry items. Each contestant would get an equal amount of identical cookie dough and could add up to 1 cup of any mix-ins before forming their cookies. I would be Tim Gunn, advisor to the contestants (and thus would not be competing myself) and would handle oven duty for the kids. After all cookies were done and cooled, each person would taste each cookie, scoring each one except their own on a scale of 1-10. Steve opted not to compete, but would participate in judging. 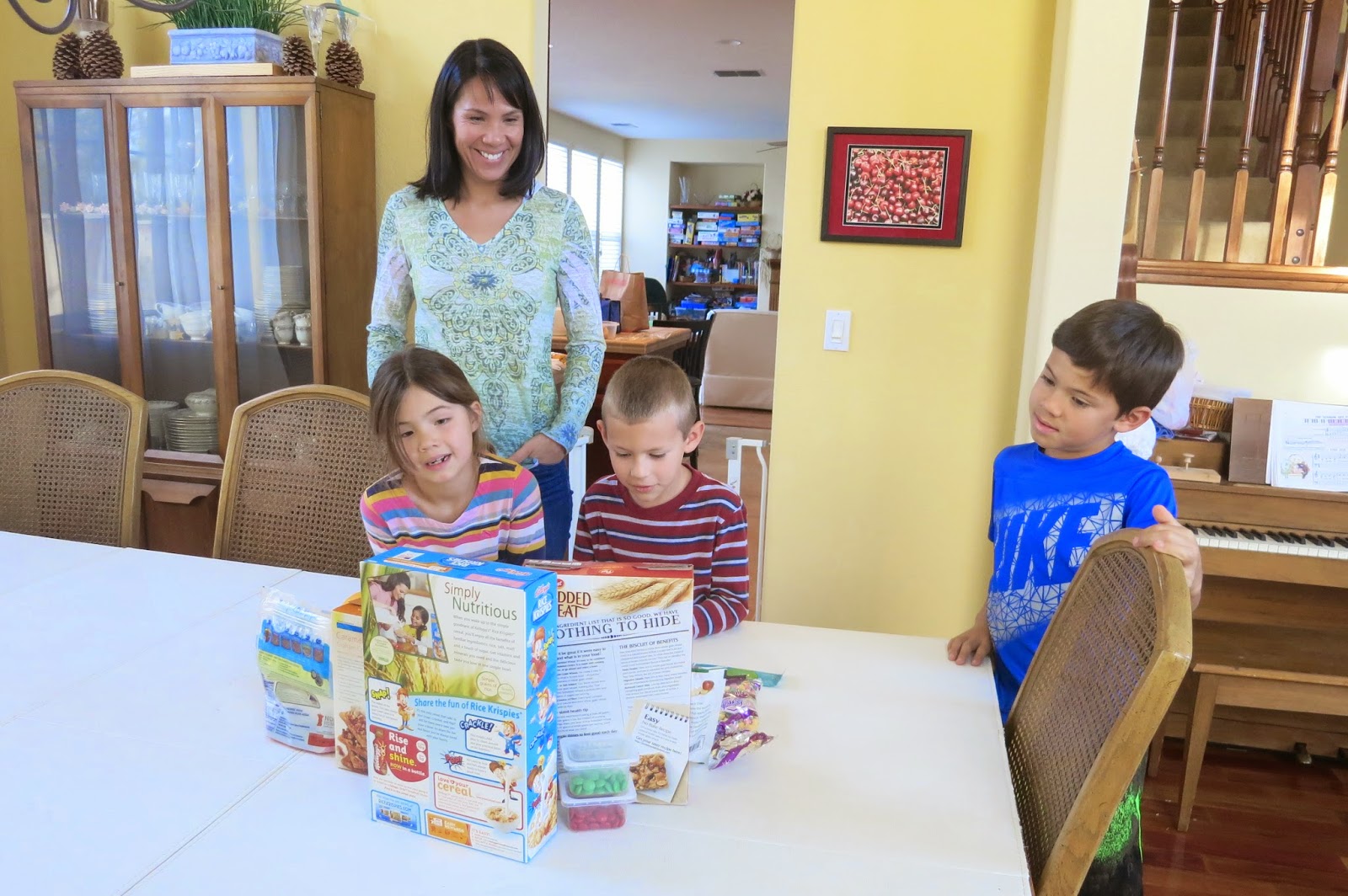 Everyone was really excited. The contestants drew numbers to see who would cook first. Since there were limited supplies in the pantry, it was possible that later contestants would not get their preferred ingredients.

Trevor (age 8) was Contestant #1. He immediately went for the candy canes, smashing them in a ziplock bag with a mallet. Trevor added three other ingredients and did not ask Tim Gunn for any advice. 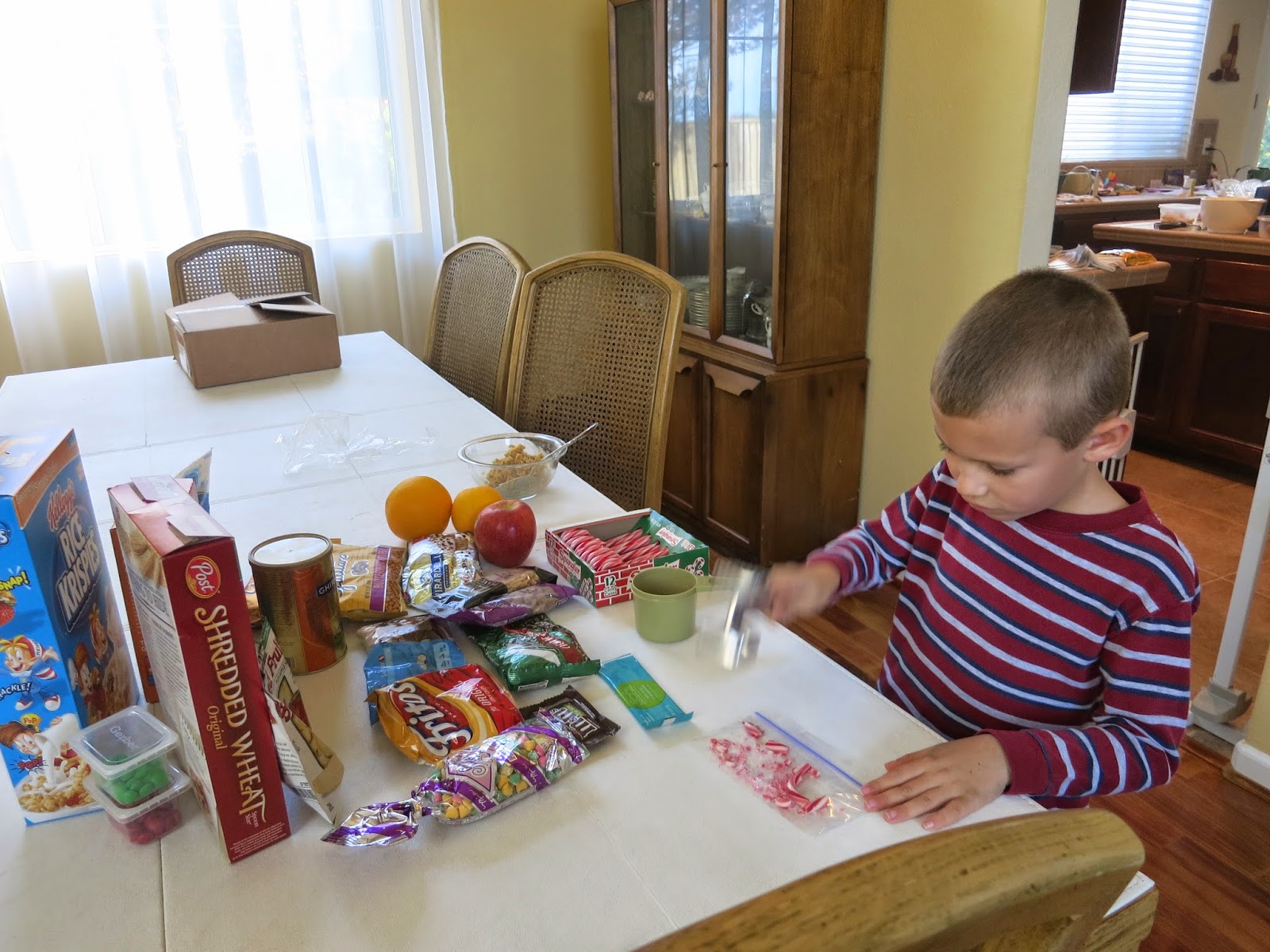 Nancy (age 42) was Contestant #2. She had visions of adding orange juice or orange zest to her cookies and had a lot of questions for Tim Gunn. Tim Gunn gave specific recommendations based on a lifetime of cooking experience. Interestingly, Nancy ignored most of what Tim Gunn had to say.... 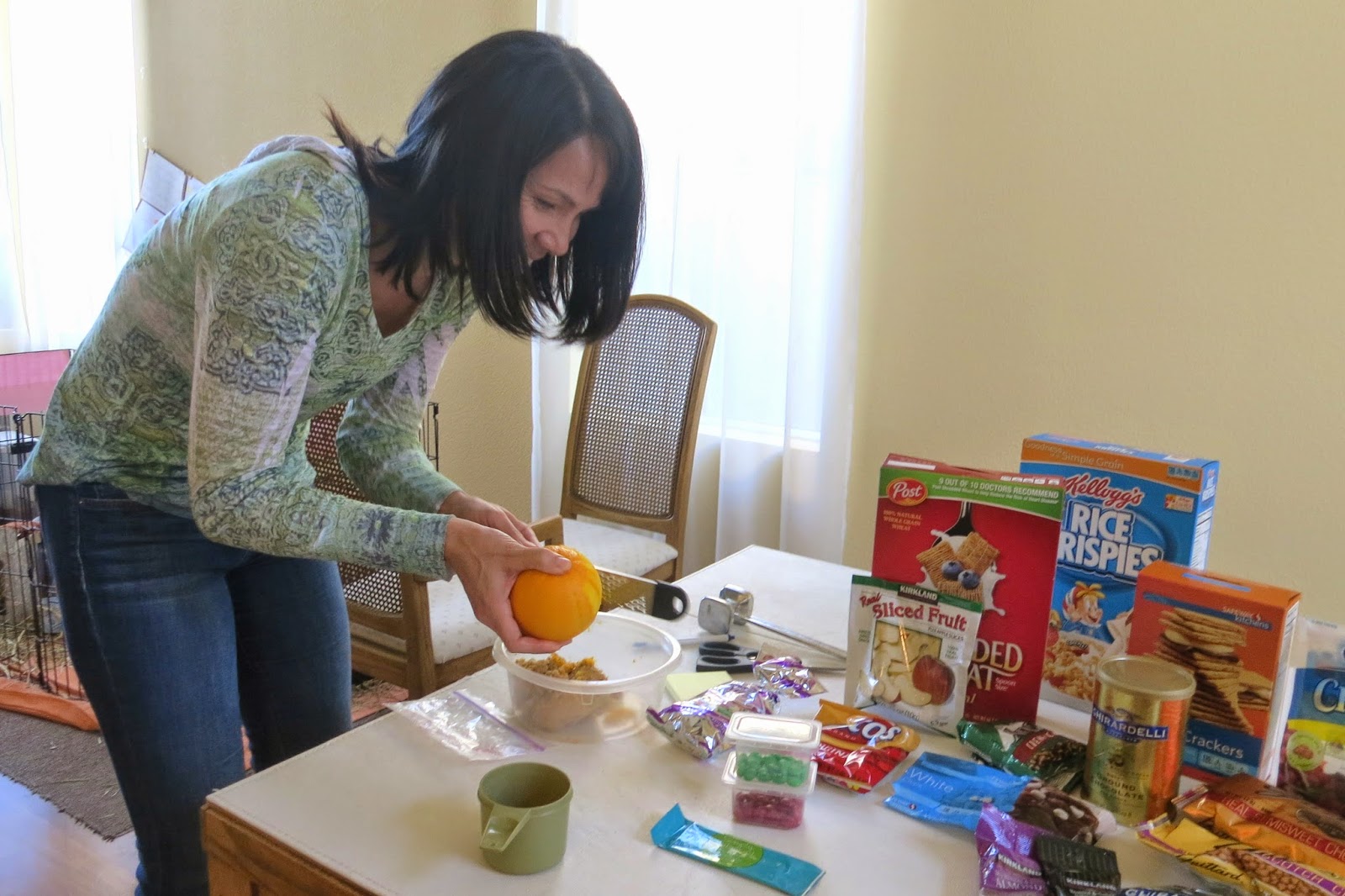 Marco (age 9) was Contestant #3. He has the least cooking experience of the four contestants and needed a bit of gentle guidance from Tim Gunn. Unlike his mother, he followed every bit of advice that Tim Gunn gave. 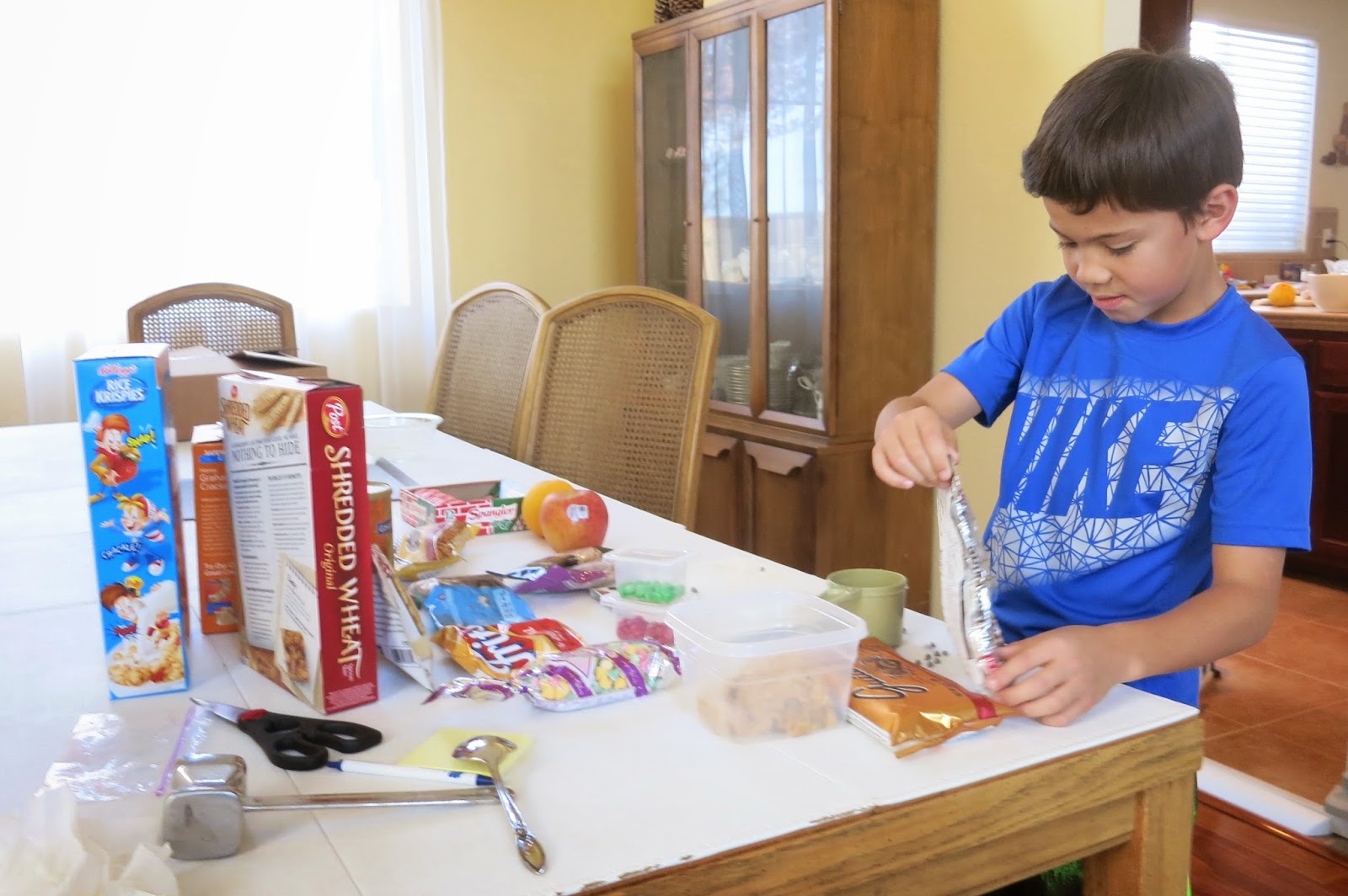 Julia (age 7) was Contestant #4. Like her brother, she asked Tim Gunn questions and actually followed the advice. 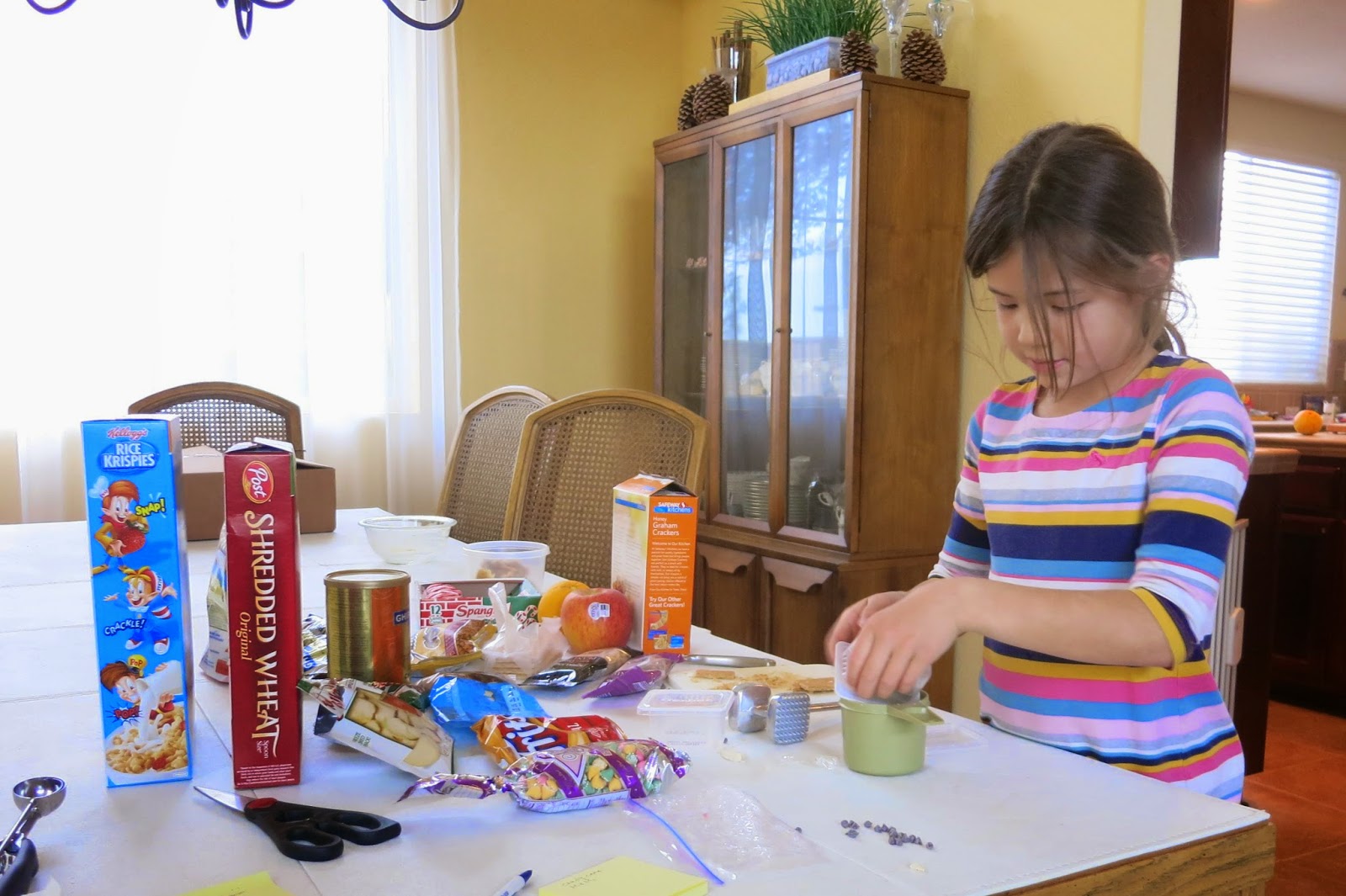 When all the cookies were done, we gathered in the dining room with our color-coded score cards. Each person presented their cookie to the group. Trevor began. 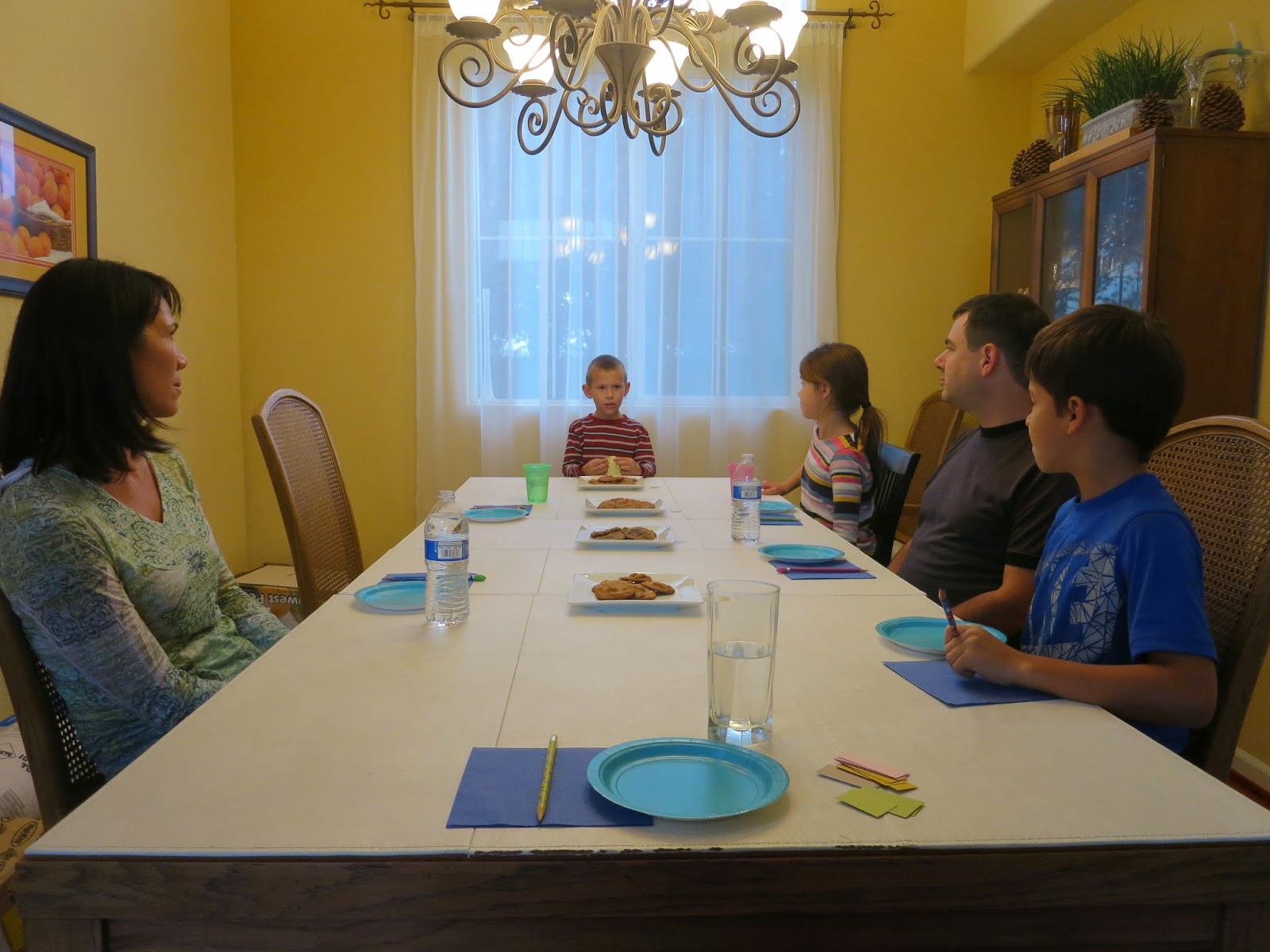 Trevor called his cookie "The PAMB." He explained that his inspiration was a BLT, except that he put in peppermint candy canes, Andes Mints, M&M's and butterscotch chips instead of bacon, lettuce and tomato. 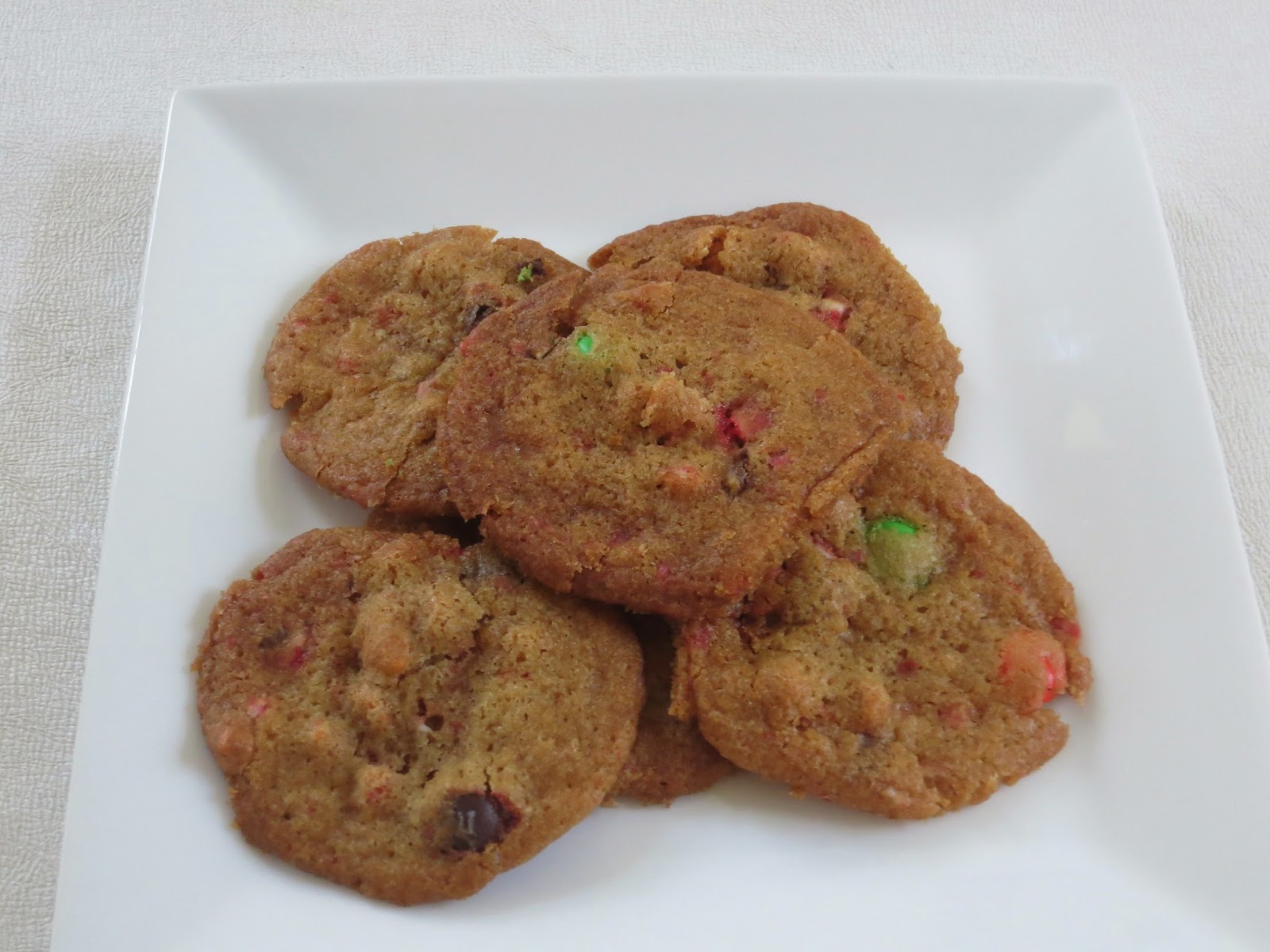 Nancy was up next. She called her cookie "Victory or Death." 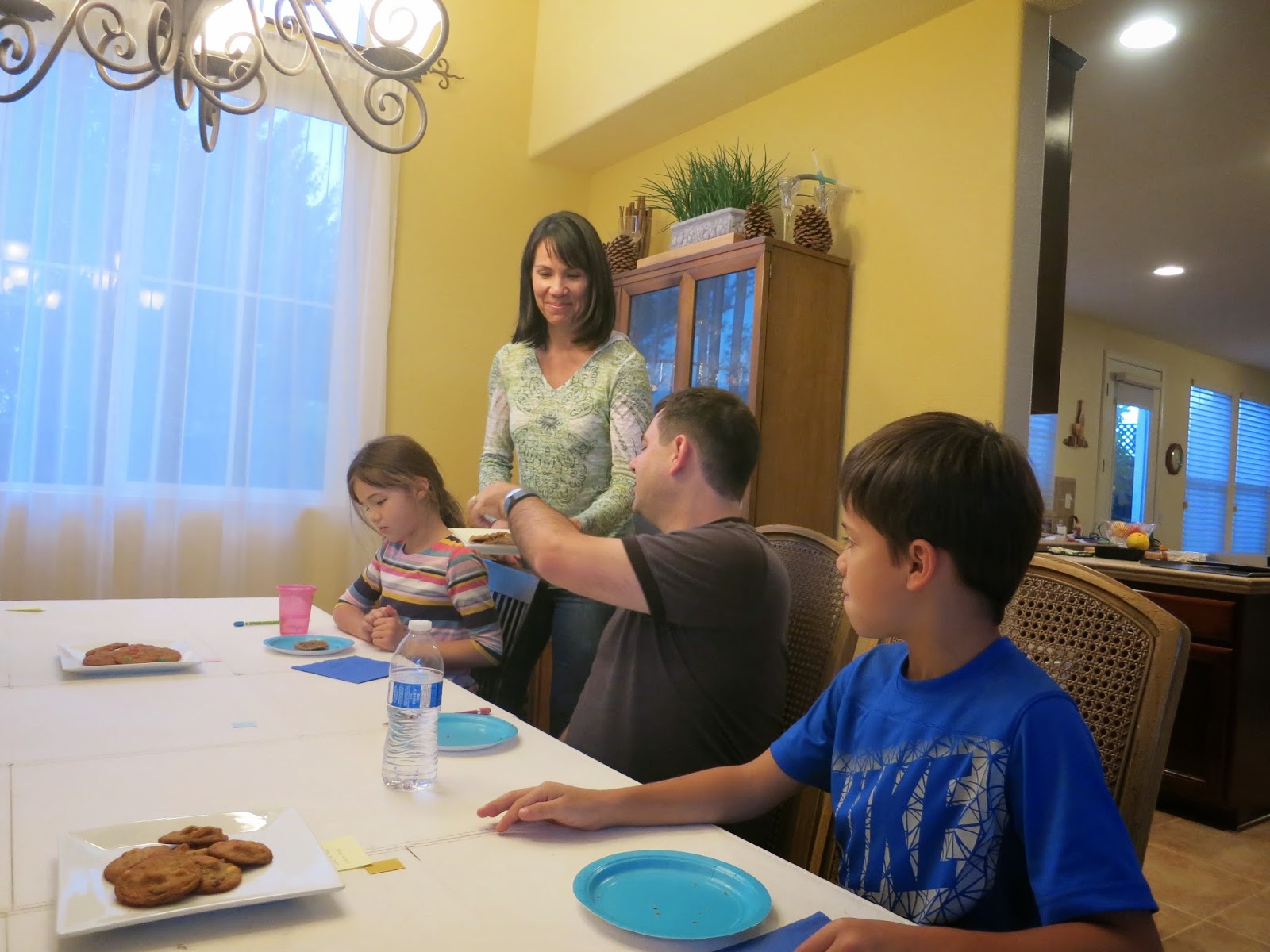 Nancy's cookies contained dried apples, pomegranate leather, semi-sweet chocolate chips, and about five times as much orange zest as Tim Gunn advised. One judge said, "It's yummy, but it's like I'm being slapped in the face with an orange!" 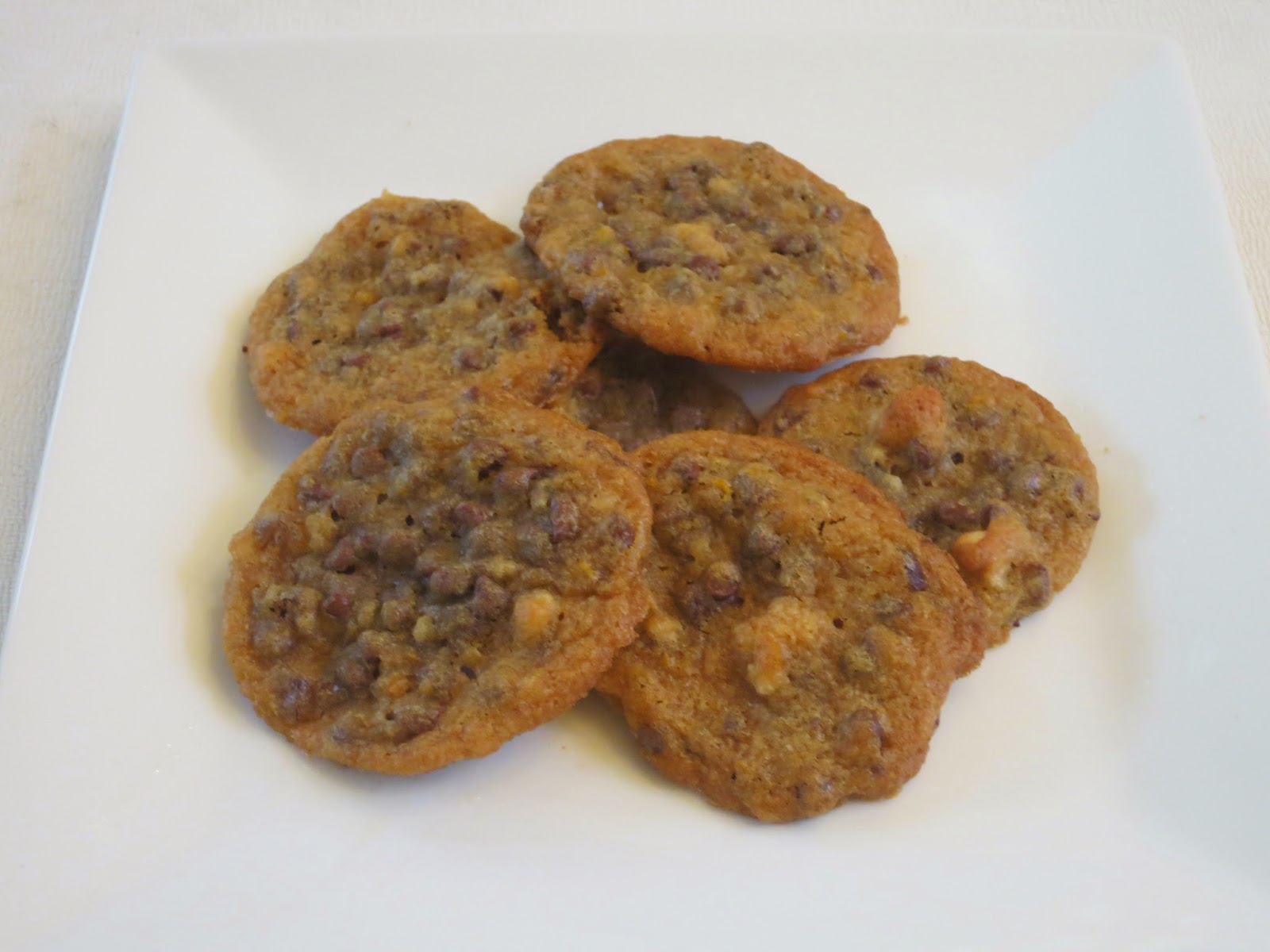 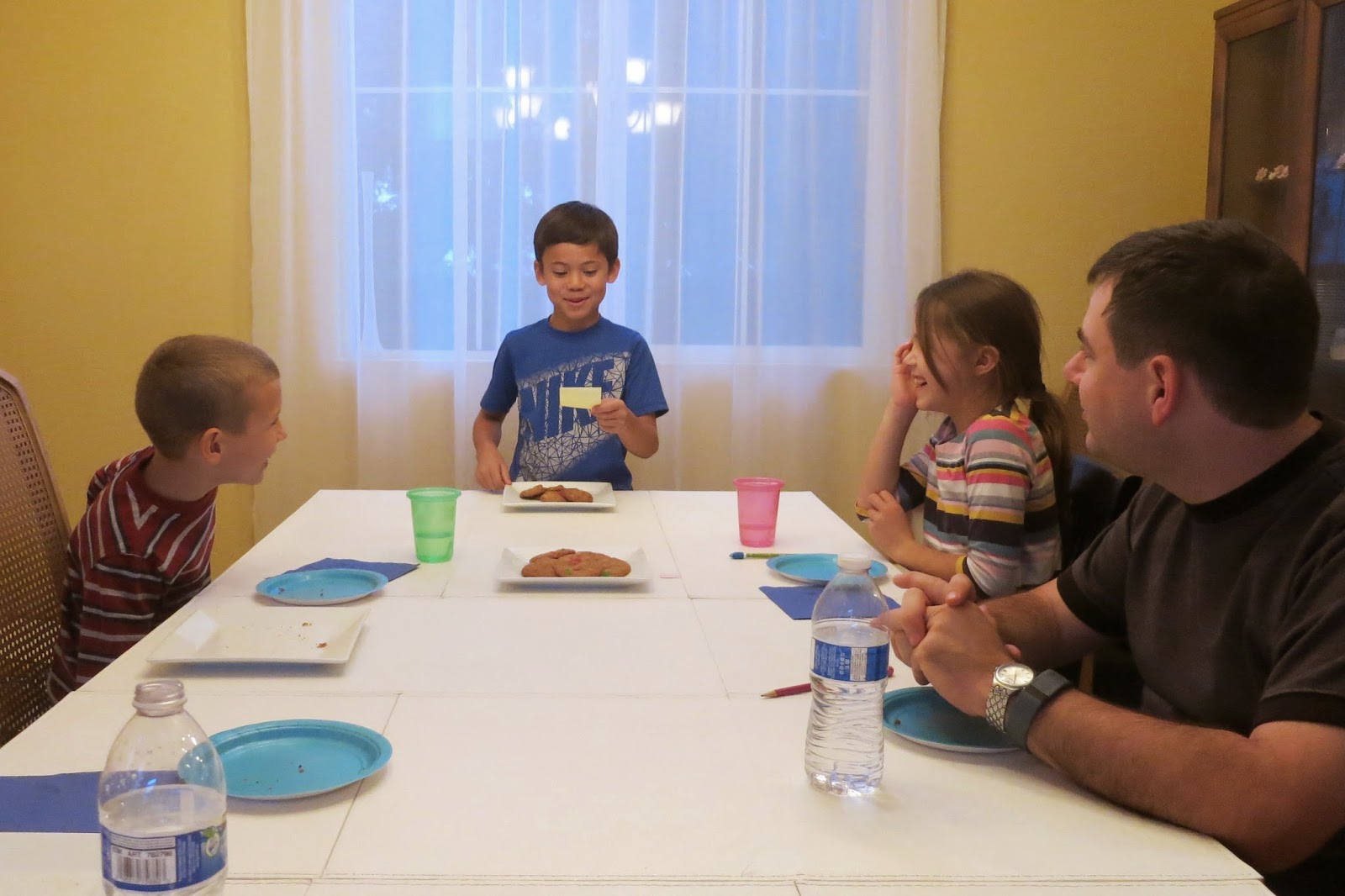 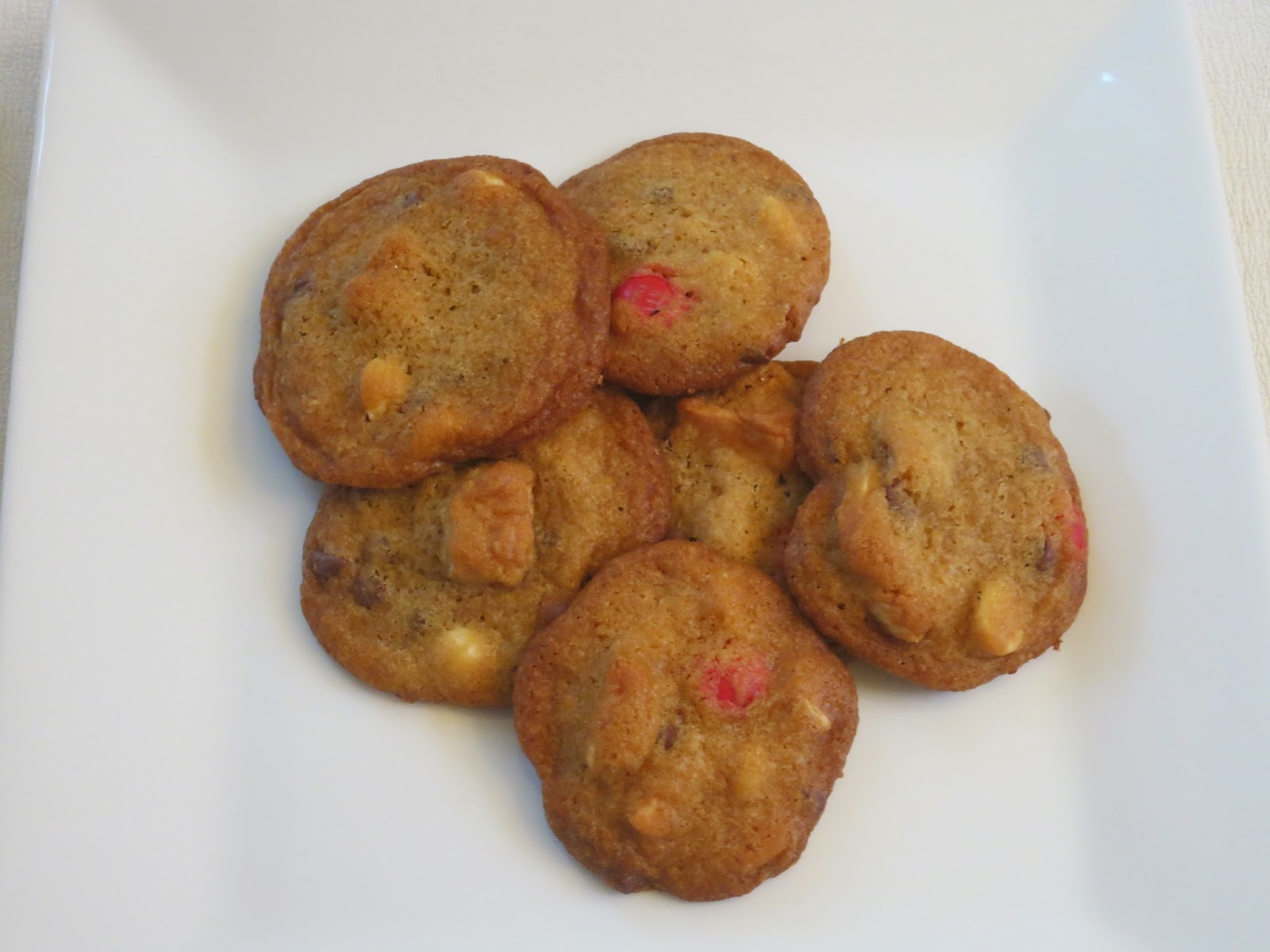 Last up was Julia, with "A Christmas Cookie." It had candy cane pieces, M&M's, nonpareil mint chocolate chips, and graham cracker crumbs. 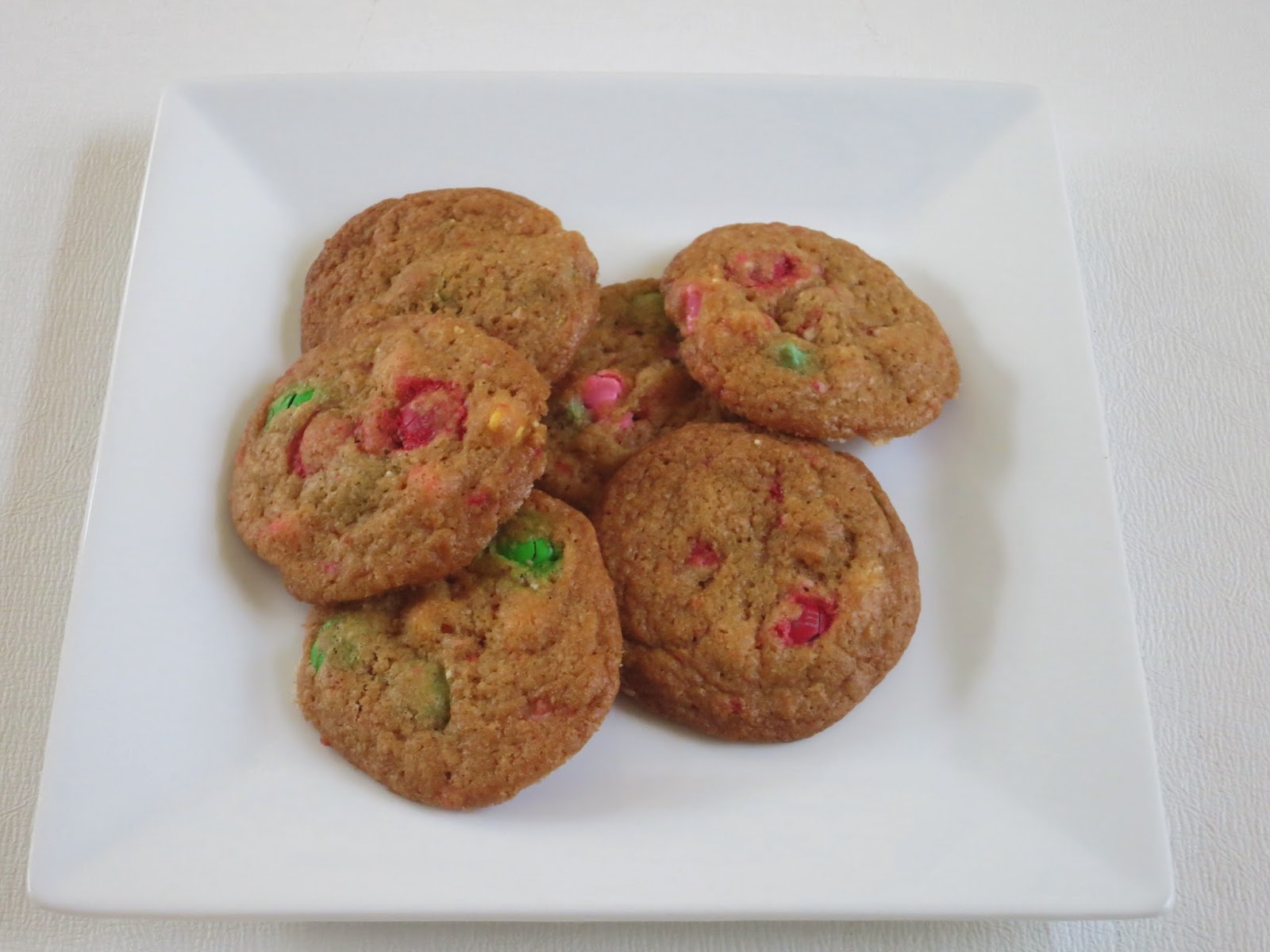 It was fascinating to see and taste the four different cookies. They all started with identical cookie dough, yet the finished cookies were nothing alike except that they were all really good.

Once all the scores were turned in and the contestants dismissed so that I could calculate the winner, I realized I made a mistake in letting 2nd, 3rd, and 4th graders judge things on a scale of 1-10. While the adults occasionally scored something with an 8.5, the kids' scores included 8.33, 9 15/16, and 4 6/8. I had to do quite a bit more math than I'd intended to come up with the winner. Next time, I'll specify fractions OR decimals (or perhaps require whole numbers!).

I called everyone back in to the dining room to announce the winner.... Julia's "A Christmas Cookie!" She was overjoyed. Her prize was a Perler bead cookie that Trevor had made, not to mention a year's worth of bragging rights. 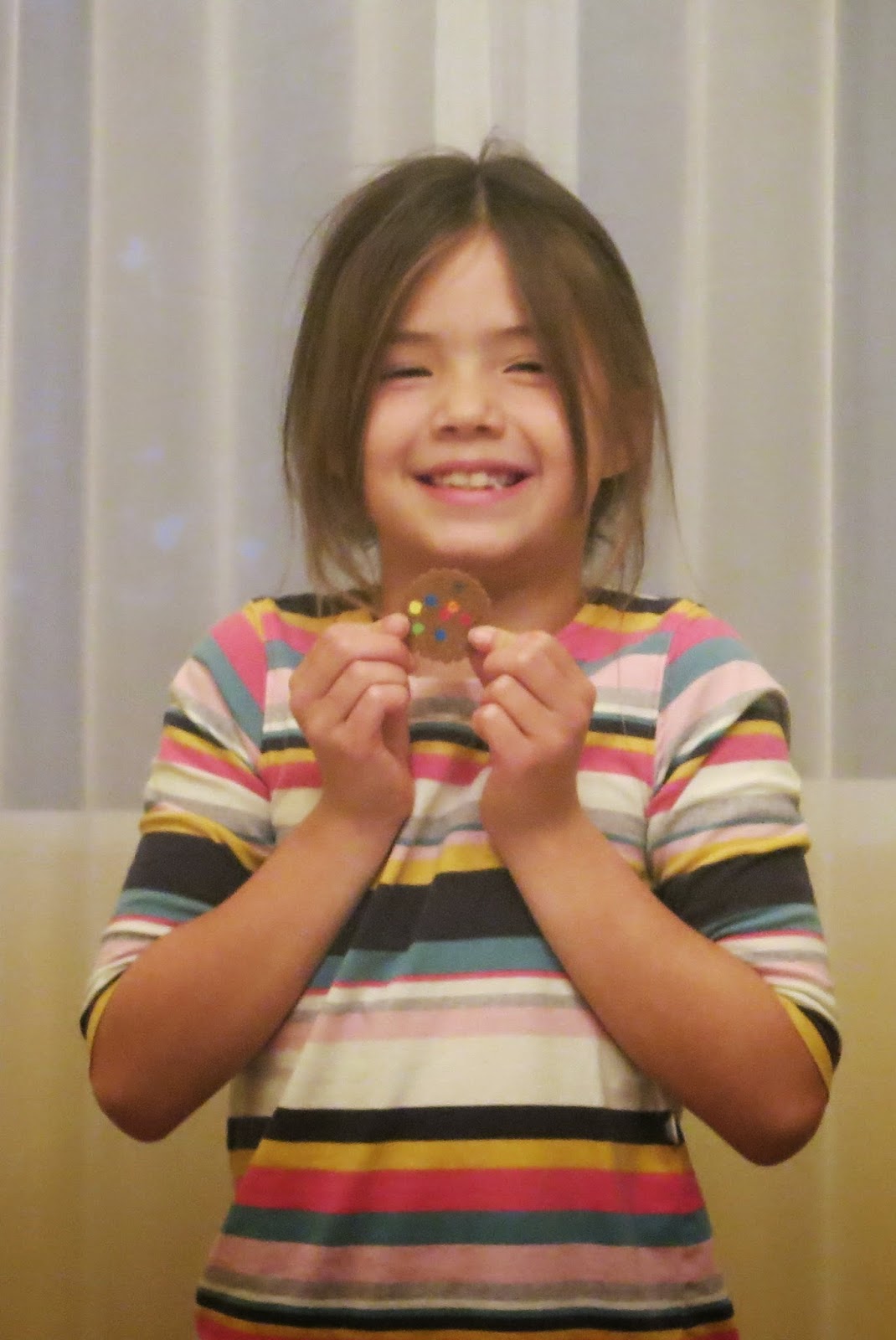 Congratulations to Julia and all the competitors for your outstanding cookie entries. I'm already looking forward to next year's competition!
Email ThisBlogThis!Share to TwitterShare to FacebookShare to Pinterest
Labels: Cooking Competition