Yesterday I told you about the Bear Pet Rocks that were the gathering activity for the Cub Scout Geology Night I hosted. I gave each boy a 7-page booklet that we used throughout the night. On the first page, I had them write or draw about their Pet Rock. They used those notes as a jumping-off point for the stories they presented to the group. Trevor named his bear Bearry. 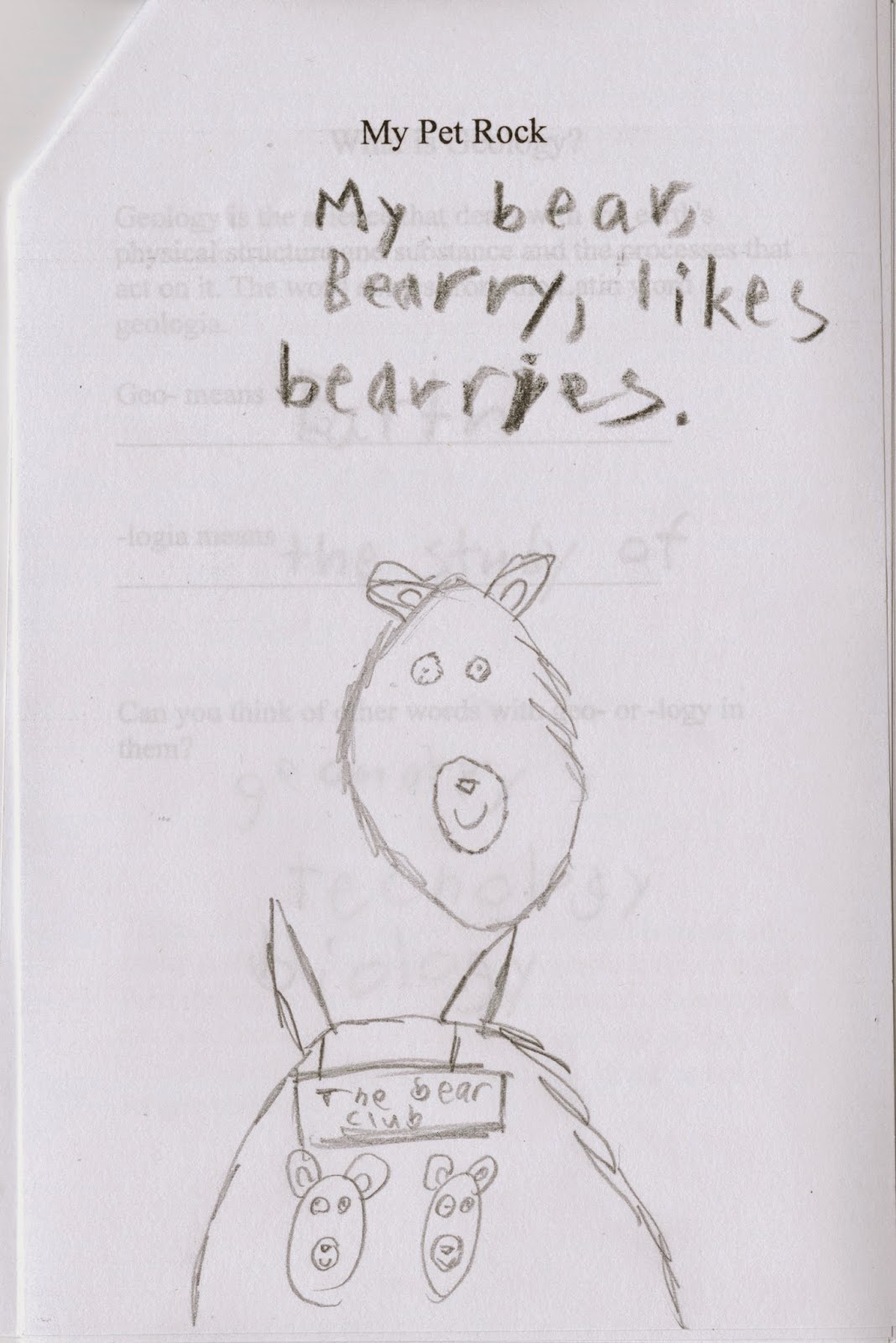 After all the boys had presented their Pet Rocks, we moved on to the more academic part of the night. We learned that geology is the science that deals with Earth's physical structure and substance and the processes that act on it. We talked about geo- and -ology and brainstormed other words that contained them. 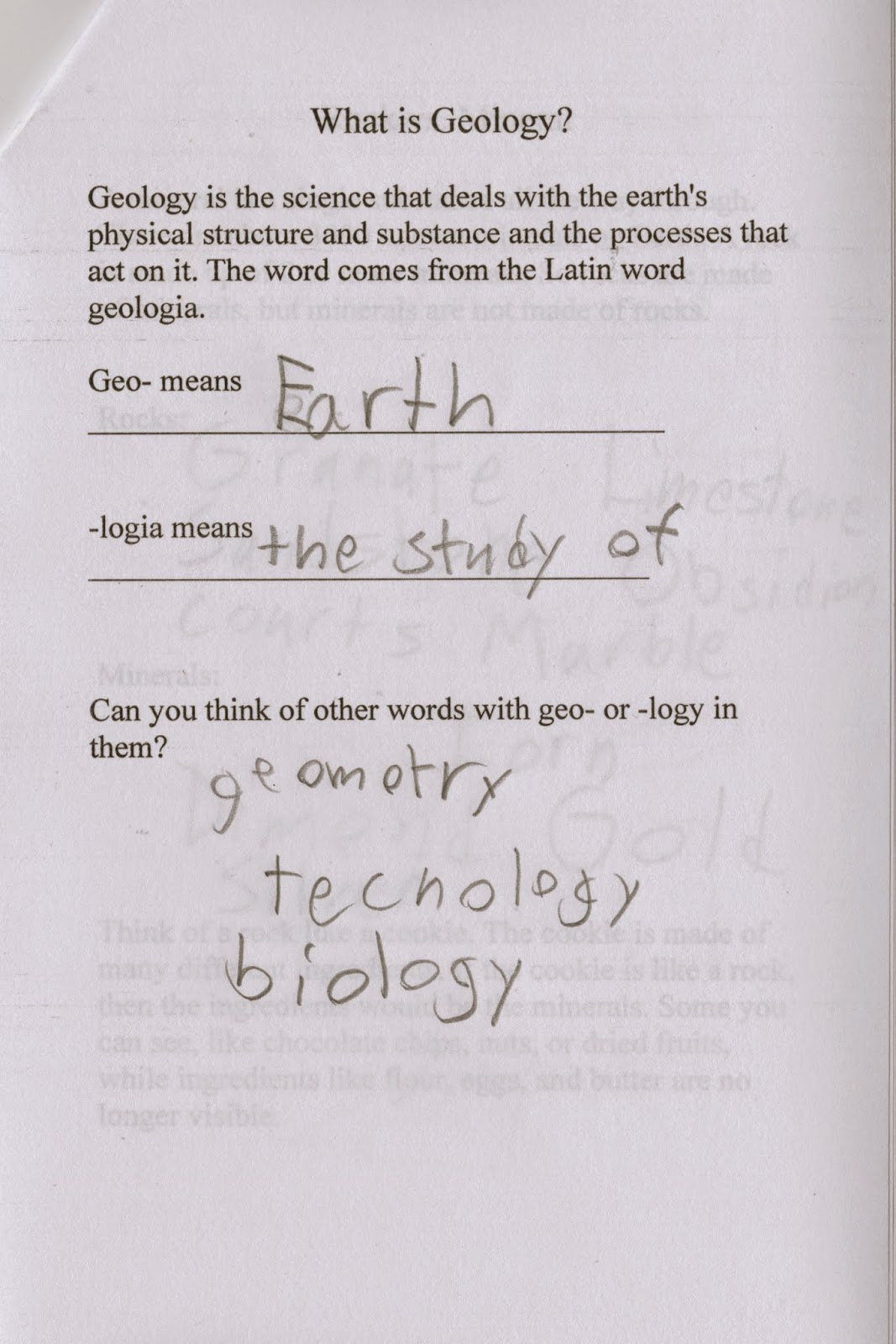 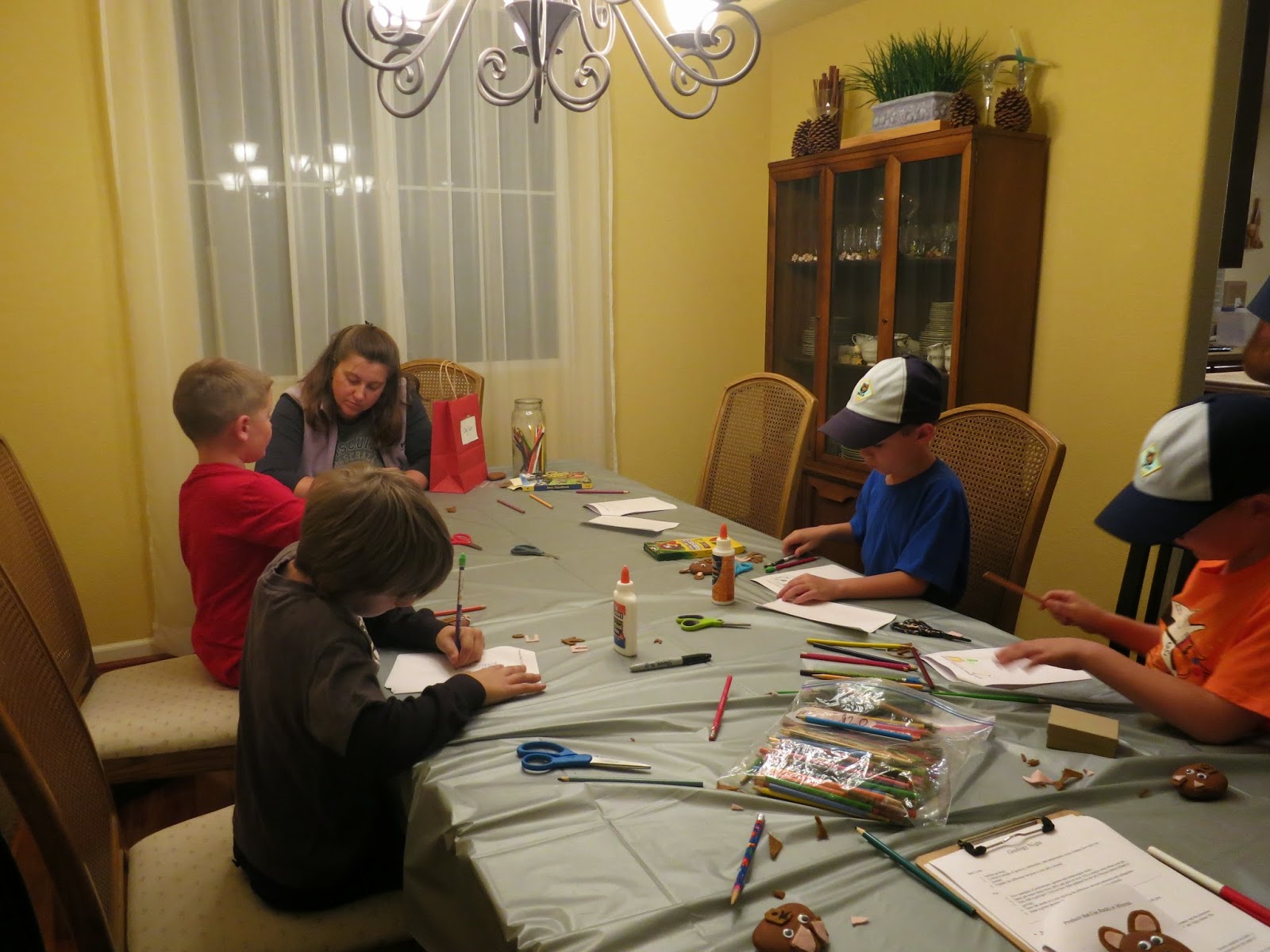 Then we talked about the difference between rocks and minerals. The boys worked together to brainstorm both. I didn't look at Trevor's booklet until I scanned it; apparently I should have taught him that the rock he knows as 'courts' is actually 'quartz!' He's been able to identify quartz for years; I never realized he was mispronouncing (and thus, misspelling) it. 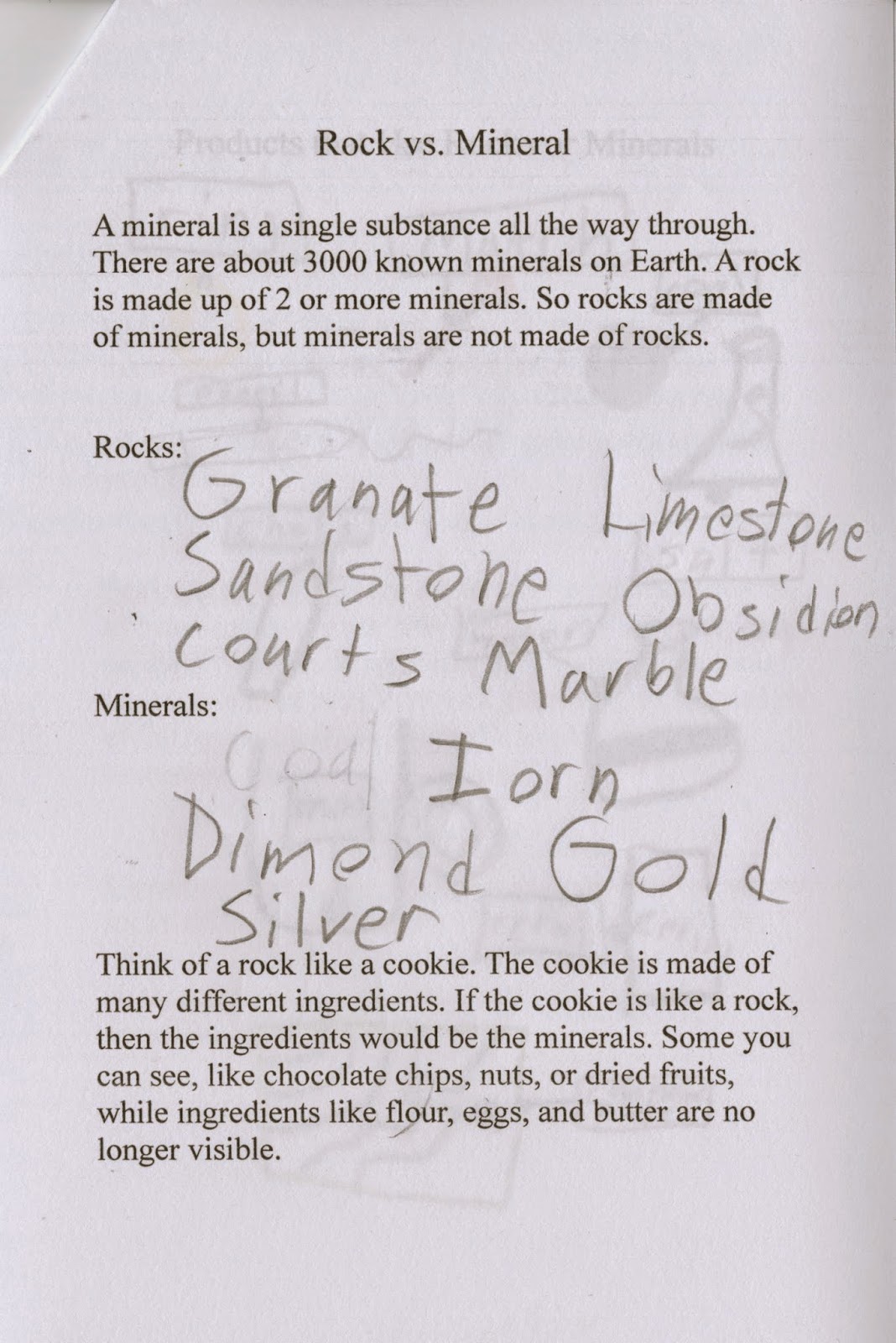 Here the boys are examining samples of rocks and minerals. 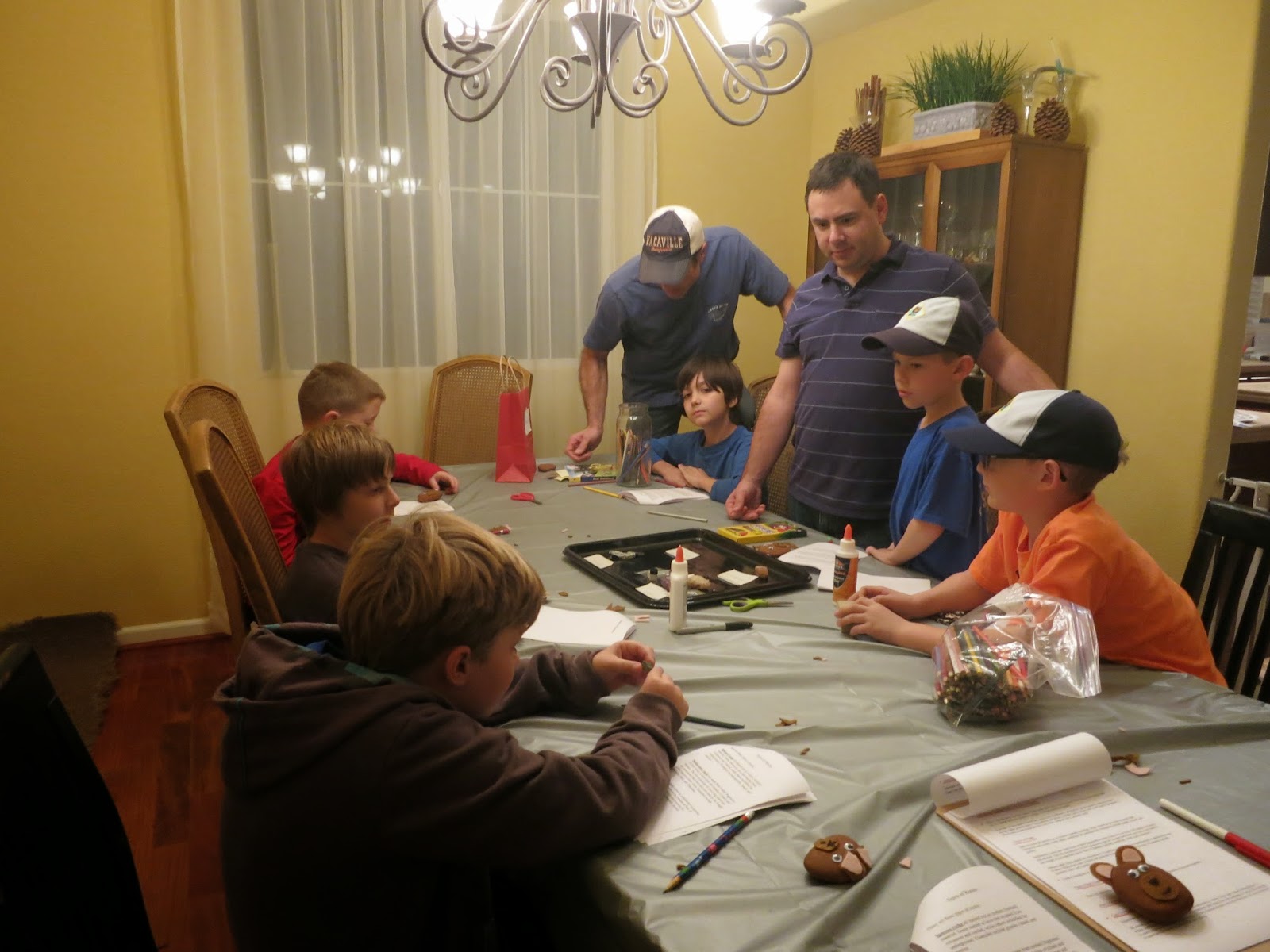 Next, it was time for a game. I divided the six boys into two teams of three and had them sit facing each other with three rings in between them. The blue center ring held a bunch of ordinary household items. The teams took turns selecting a product that they thought was made of or contained rocks or minerals. If they were correct, the item went into their team ring (either yellow or green). In this picture, you can see that the yellow team has correctly identified salt as a mineral. 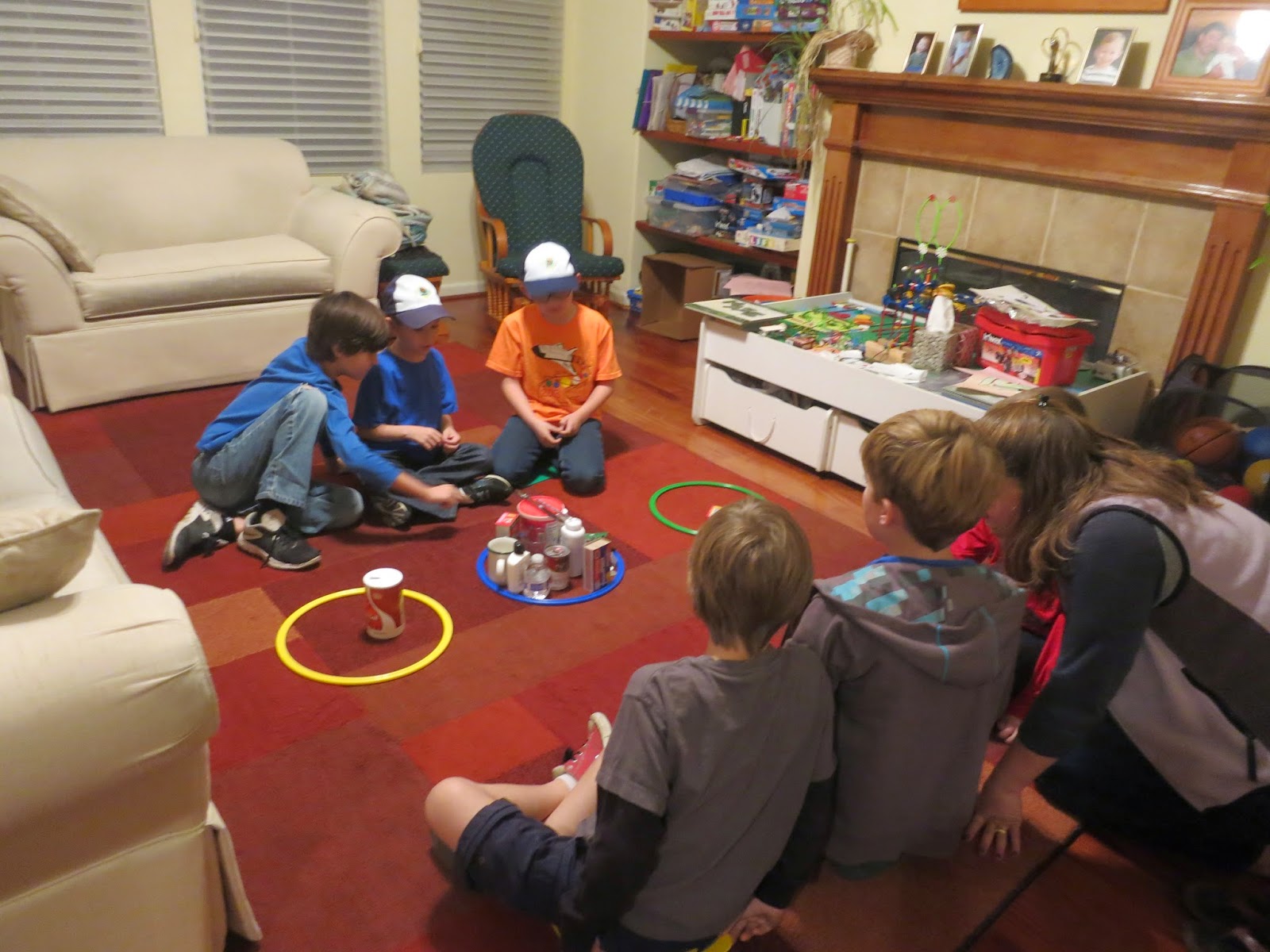 The boys did an excellent job working together to identify the correct items. Neither team made a mistake... because I'd intentionally chosen only items that contained rocks and minerals! They didn't know this, of course, so they chose the most obvious items at first and were increasingly nervous about their choices as the game went on. There were an even number of items, so the game conveniently ended in a tie and everyone was happy. 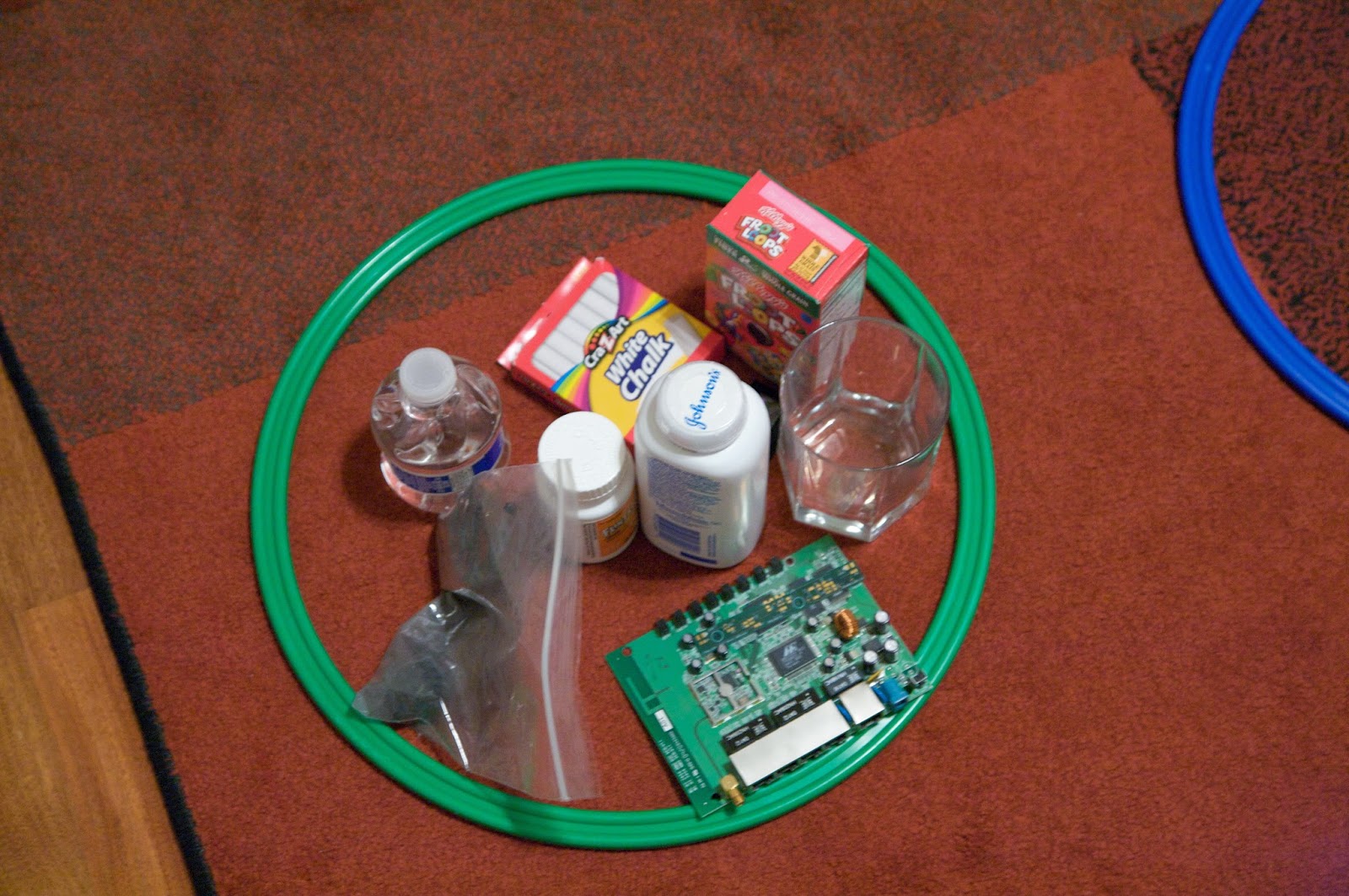 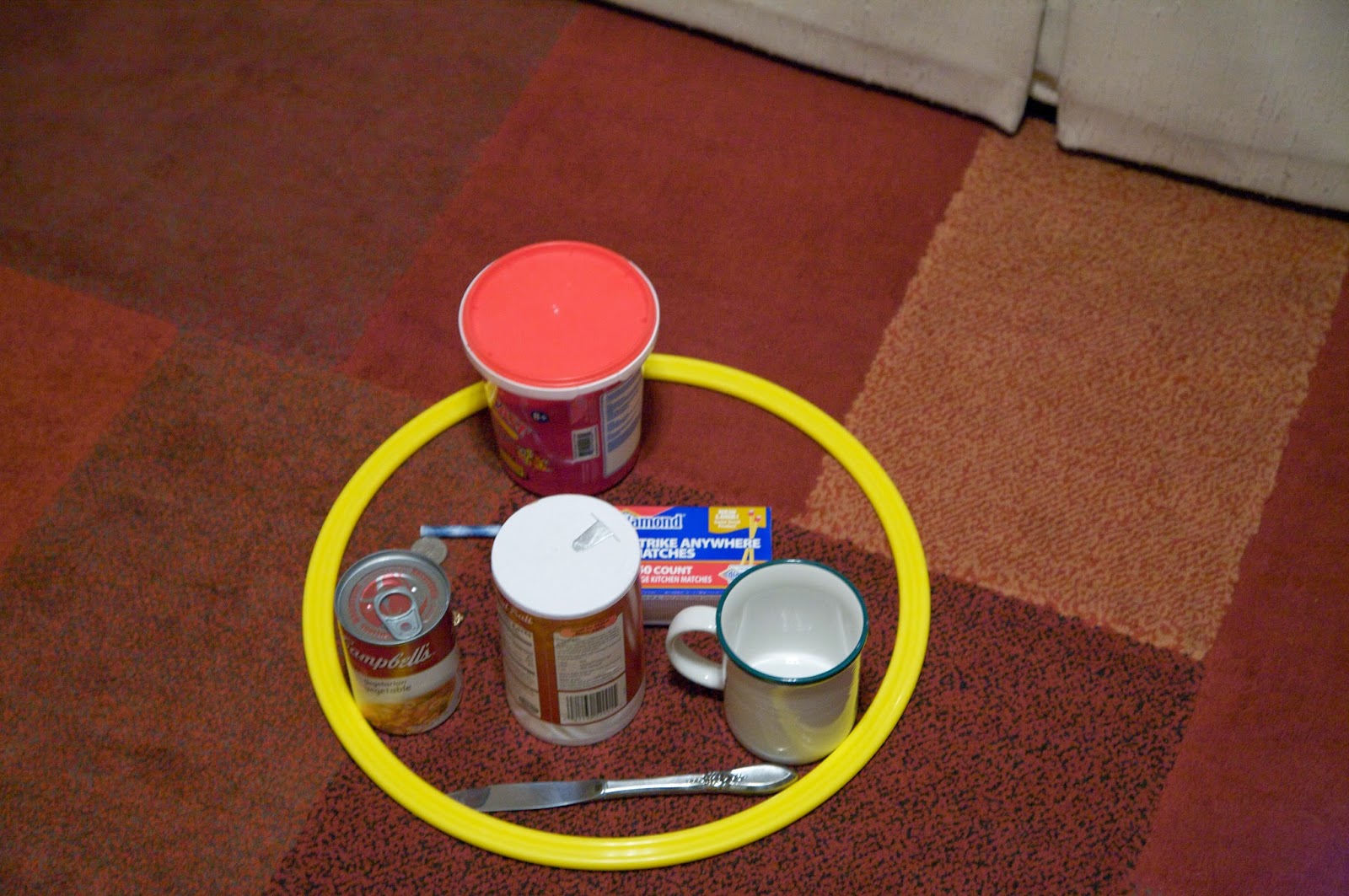 For their next requirement, they needed to make a poster featuring at least ten products with rocks or minerals. It was easy after playing the game. 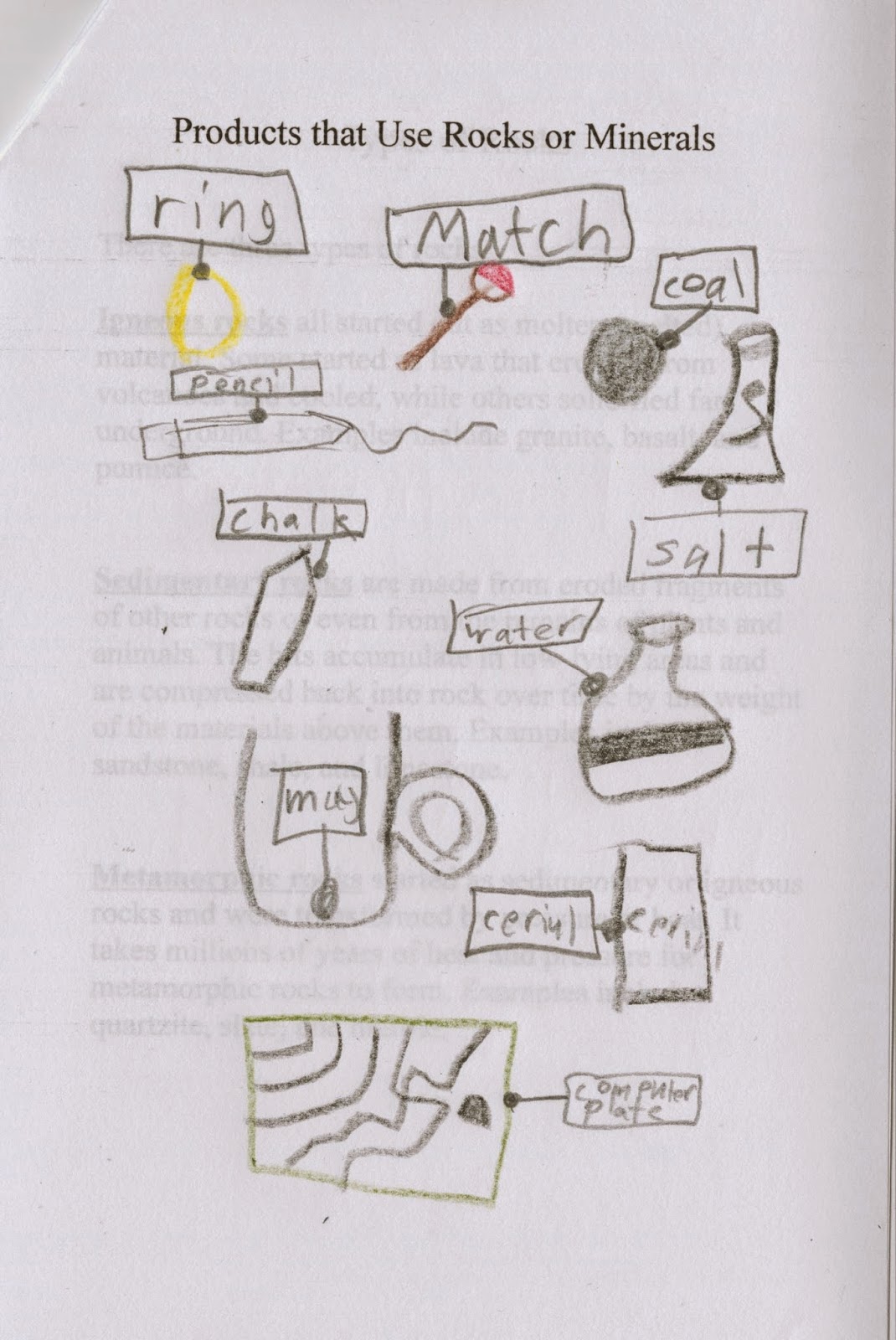 We moved on to talk about igneous, metamorphic and sedimentary rocks. The boys examined samples of each, then we headed to the garage for a science experiment. I showed the boys some red and yellow Candy Melts and explained that they represented igneous rocks. 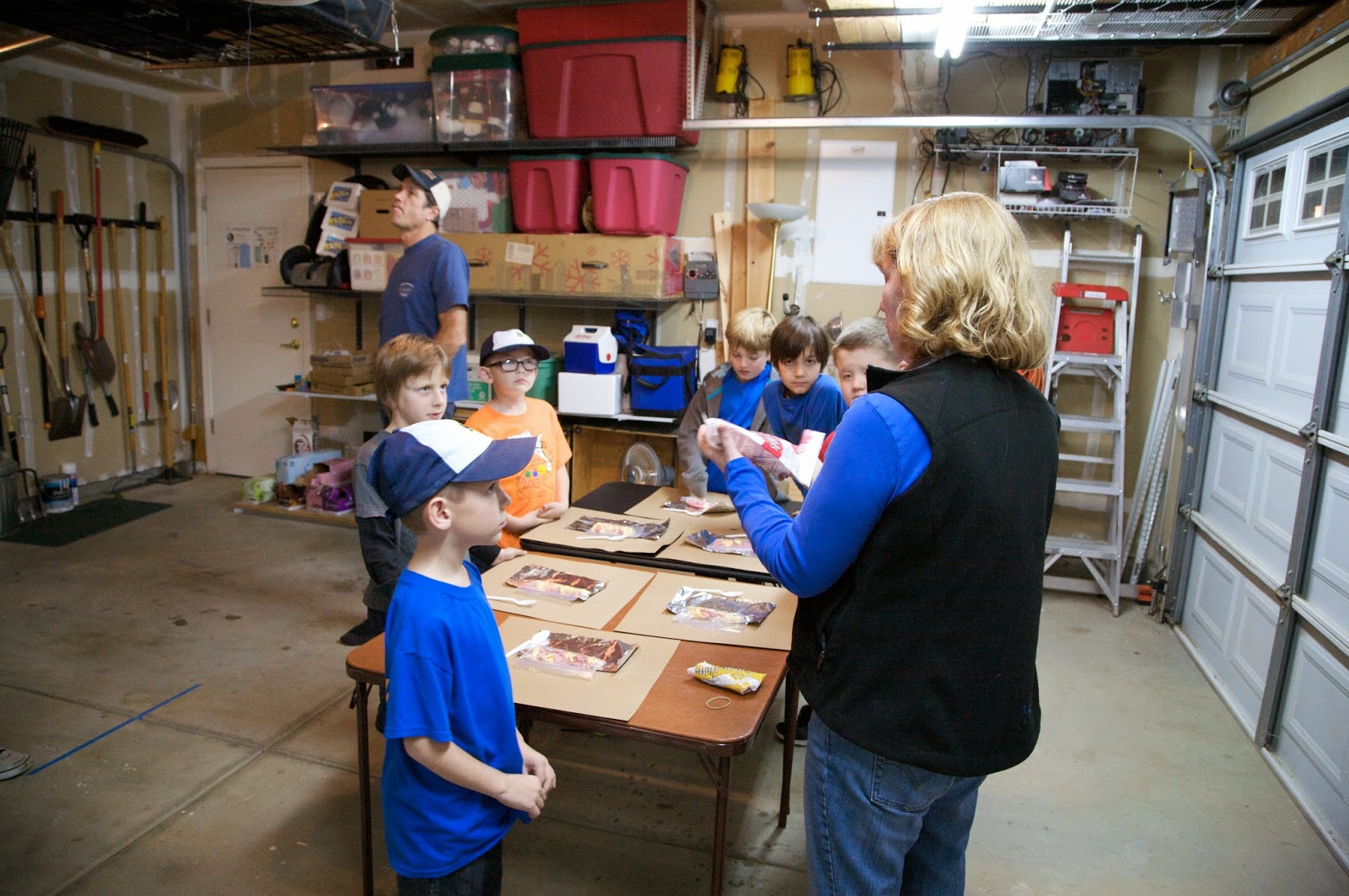 I put them in a baggie and hit them with a mallet to simulate weathering of the rocks. We layered the weathered 'rocks' into baggies and then added pressure. 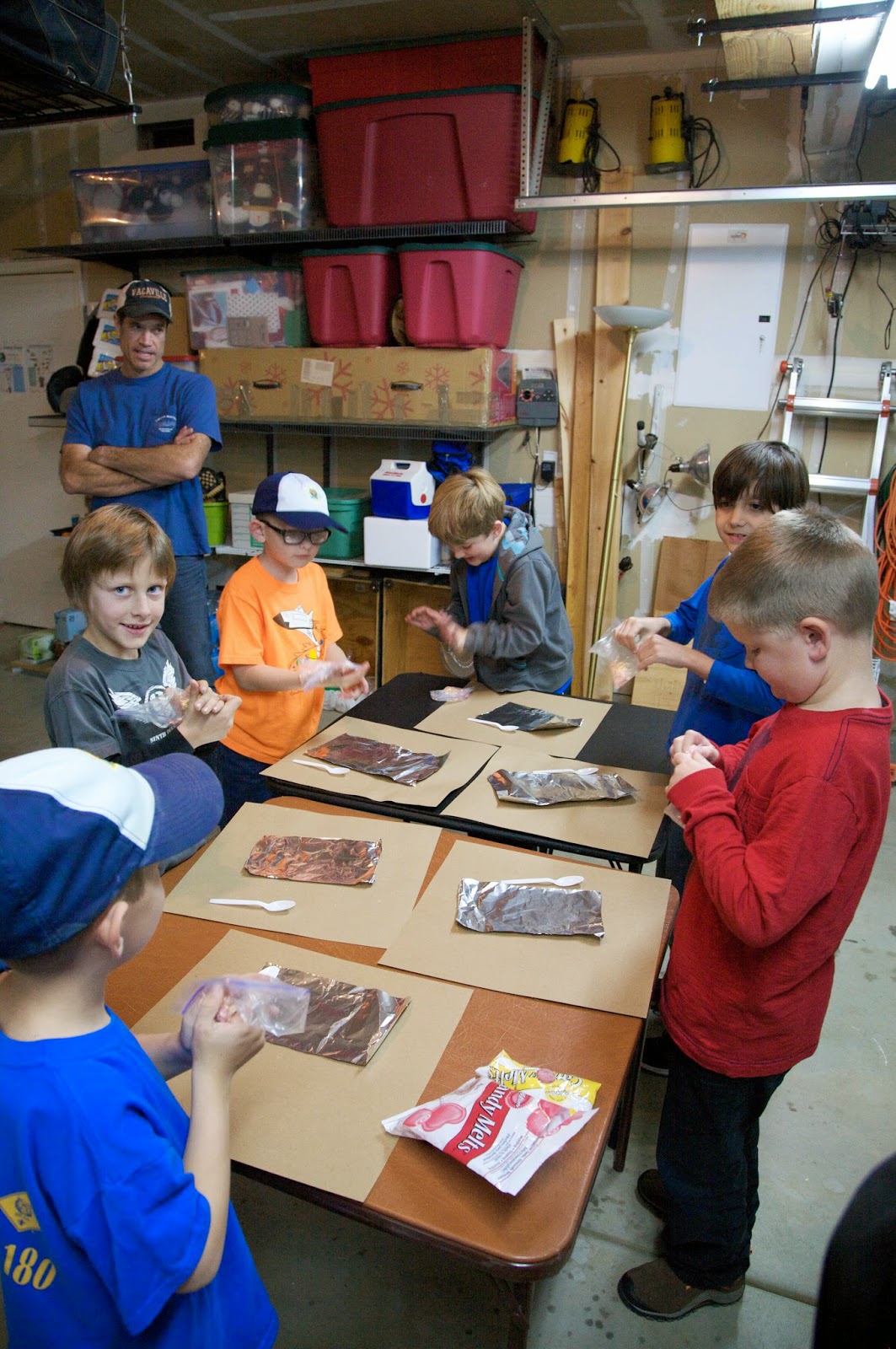 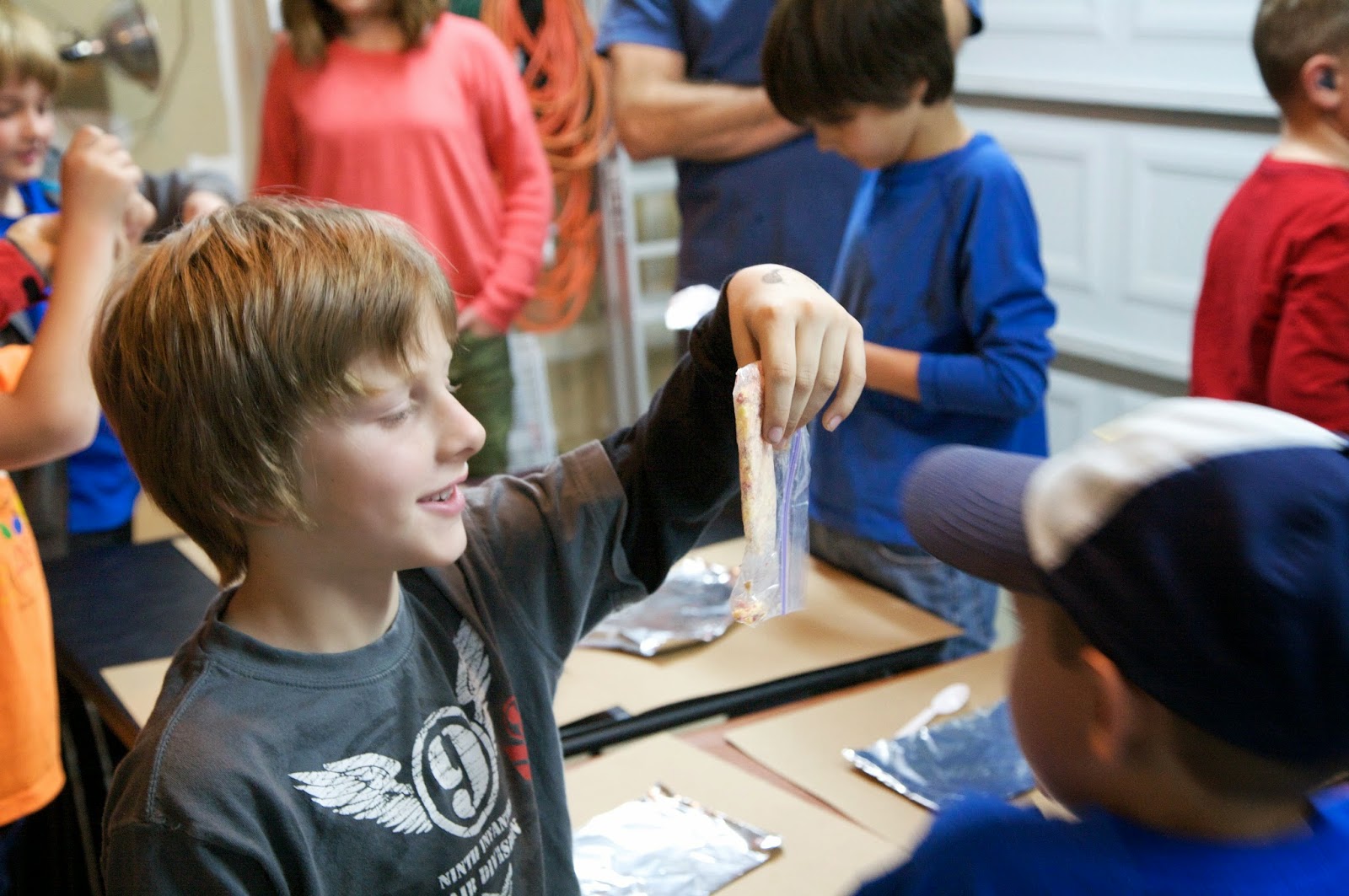 We talked about how heat and time can change sedimentary rocks into metamorphic rocks. To simulate that, each boy made an aluminum foil boat for his sedimentary Candy Melts and put them into hot water. 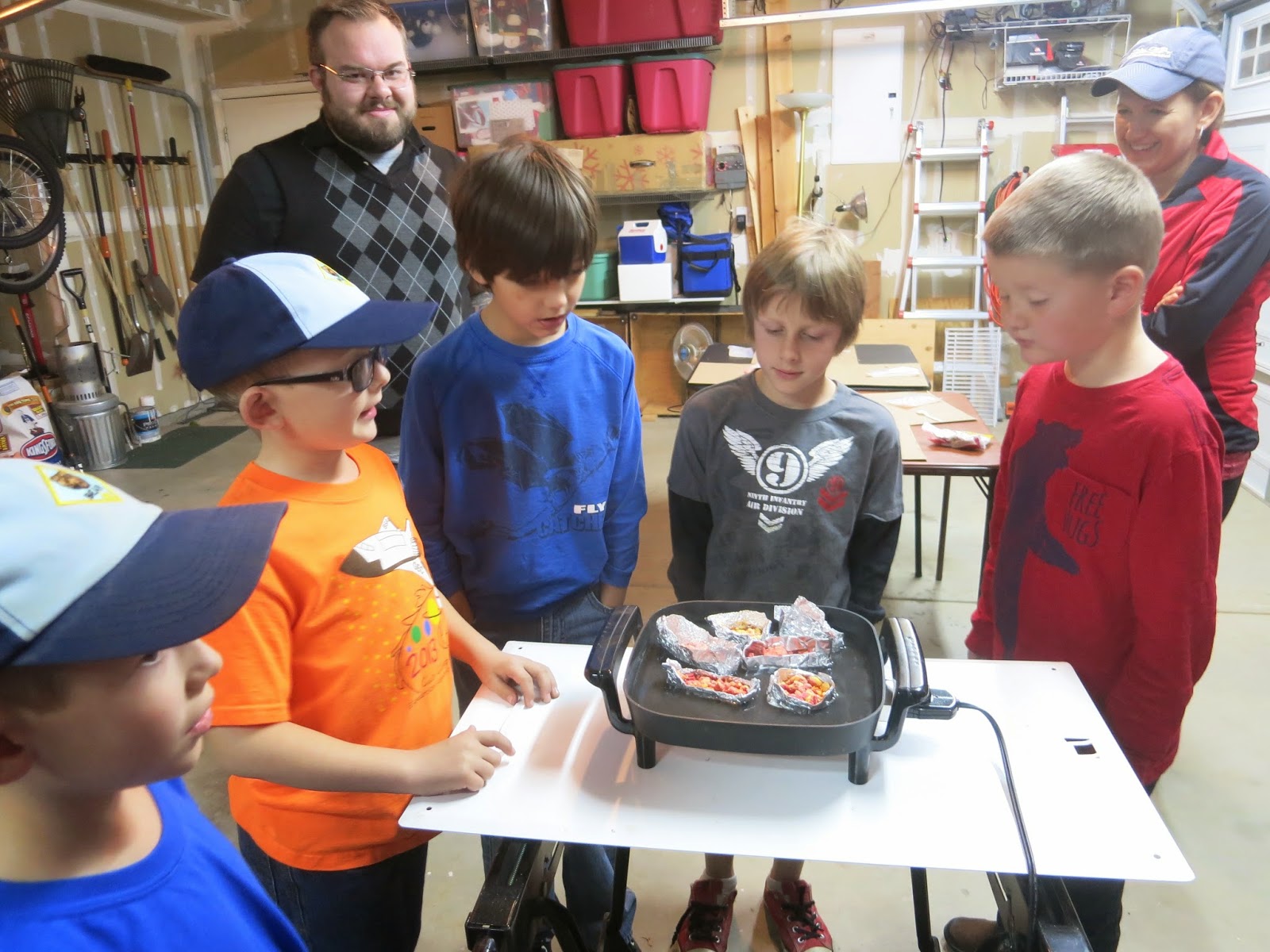 We counted by 100,000s to reach 3 million years. Then we removed our molten Candy Melts from the hot water and moved them to the freezer and headed back inside where we 'met' a geologist. I'd contacted the UC Davis Geology Department and asked friends on Facebook for any geologist willing to video a message for the Cub Scouts. Huge thanks to Regina for helping us by explaining her job, the necessary training, and what 3rd graders should do if they think they might want a career in geology. 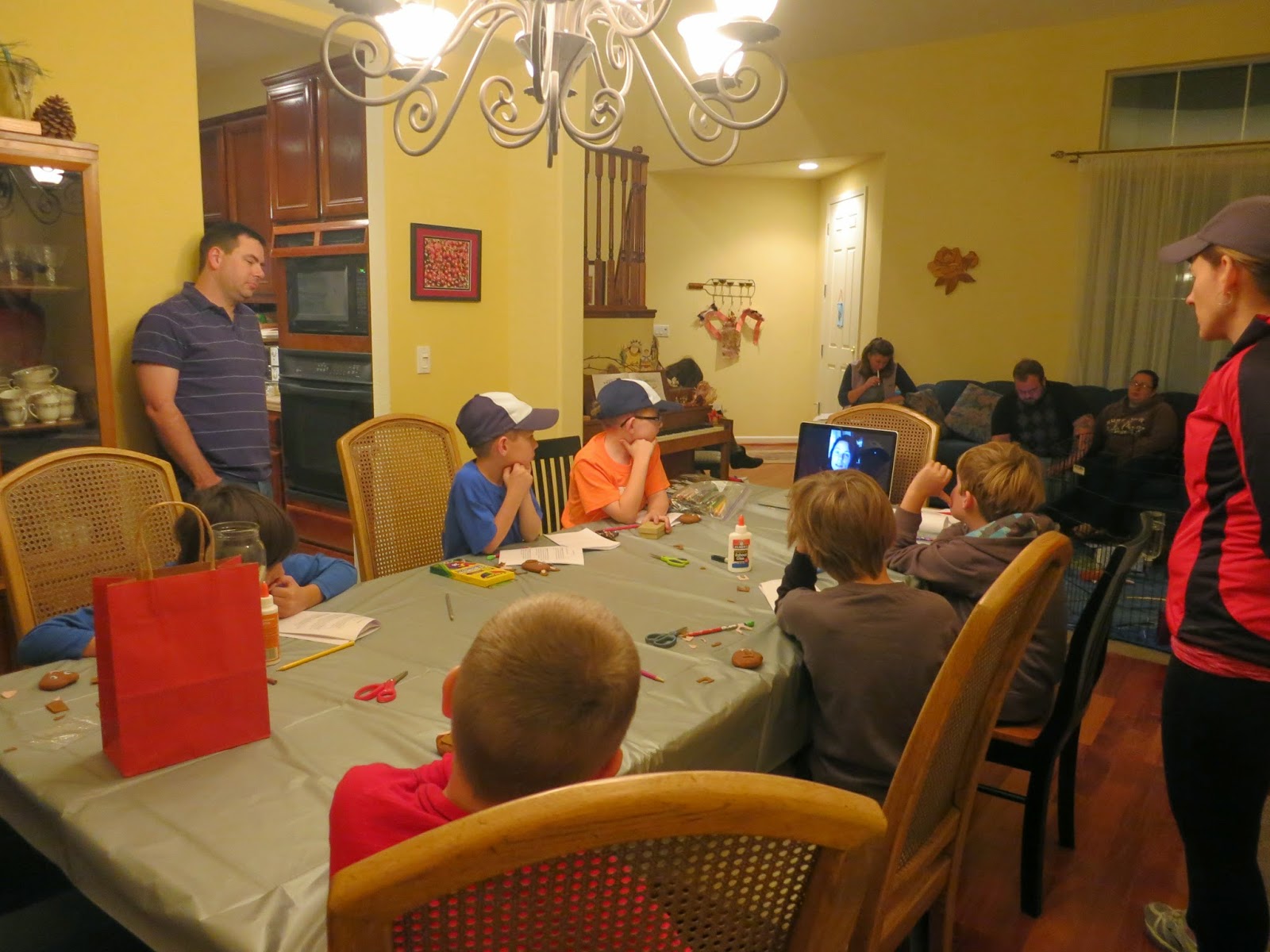 We headed back out to the garage to check on our Candy Melts. Now that they'd gone through the whole rock cycle, the boys were able to eat them. Tasty! 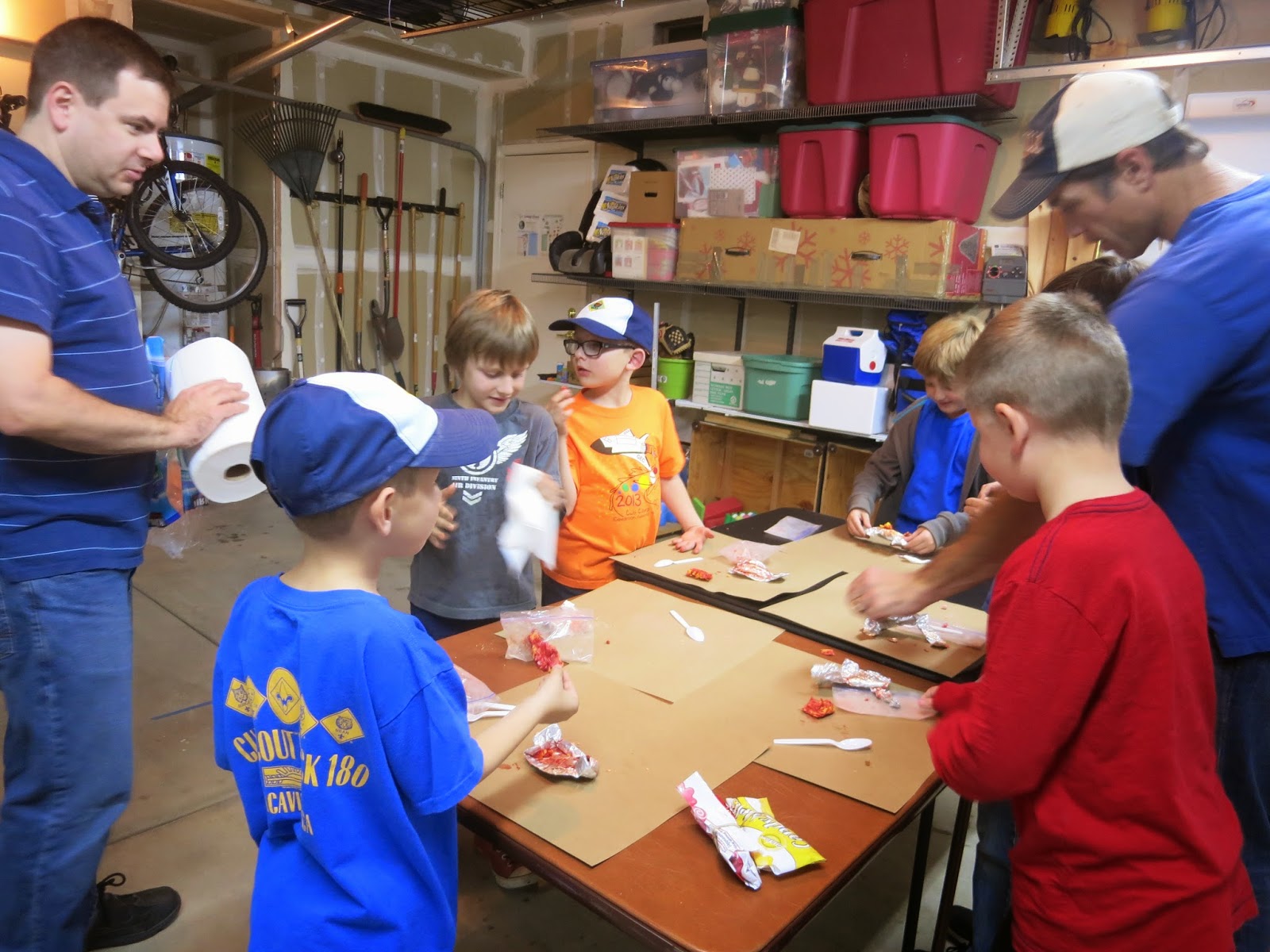 We headed back inside for our last requirement, which was to learn about stalactites and stalagmites. The boys looked at images on the computer and then drew their own cave pictures.

After nearly two hours, all of the boys had completed the requirements for their Geology Belt Loop and Pin. Mission accomplished! Best of all, they had a great time. I did too.

One last photo to share. Everyone who comes to our house can't get enough of Trouble. The Cub Scouts were no exception. 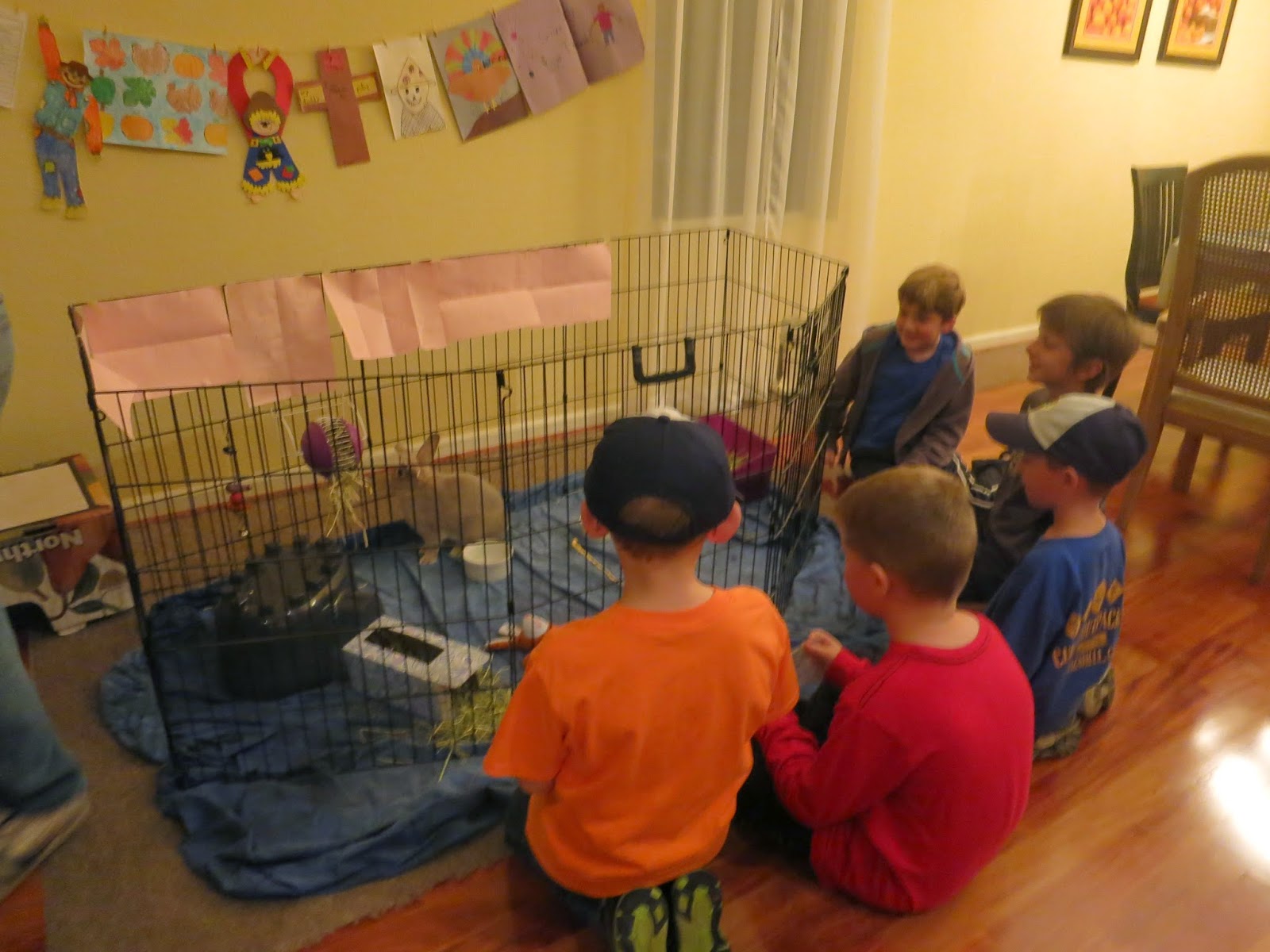 I'm already thinking about what my next Belt Loop Night will be!
Email ThisBlogThis!Share to TwitterShare to FacebookShare to Pinterest
Labels: Cub Scouts