Trevor has been hard at work on completing as many of the Cub Scout Belt Loops as he can before the Academic and Sports Program ends. He only has a little while left before the May deadline. As of now, he has earned 24 of the 25 Academic Belt Loops (Weather is the only one he's missing) and 20 of the 28 Sports Belt Loops (missing Basketball, Flag Football, Hockey, Horseback Riding, Skateboarding, Softball, Ultimate and Volleyball). He's earned 15 out of 25 Academic Pins and 4 of the 28 Sports Pins.

We've been keeping a close eye on the requirements as the deadline looms. The last time Trevor and I went through the book, we noticed that he was very close to earning several of the Academic Pins. In the case of the Citizenship pin, he was only missing one requirement, to create a collage about America. An art project! Needless to say, he wanted to drop everything and start collaging that minute. Also needless to say, I was just as eager to start a collage of my own!

I donate our old magazines 2 or 3 times a year, so I usually have a decent stack of magazines on hand. In addition to magazines, I got out white drawing paper to use as a base, scissors and glue sticks. With our supplies ready, we each grabbed magazines and started tearing out images that reminded us of America. We didn't pay too much attention to each other as we were gathering images, so it was fascinating once we stopped to look at each other's piles. Trevor had chosen many images of California, such as the Golden Gate Bridge, our state flower (Golden Poppy), our state bird (California Valley Quail) and an advertisement for the Jelly Belly Factory. He had images of landmarks, animals, flowers, and foods from the rest of the United States... but only places he had been! I, on the other hand, had a more diverse set of images, which accurately reflects the fact that I've seen a lot more of the US than Trevor has. I also had a lot of words and phrases in my pile. Trevor had exactly one: Home.

Once we had our images torn out, we cut them neatly and started arranging them on the paper, using the glue stick to adhere them. 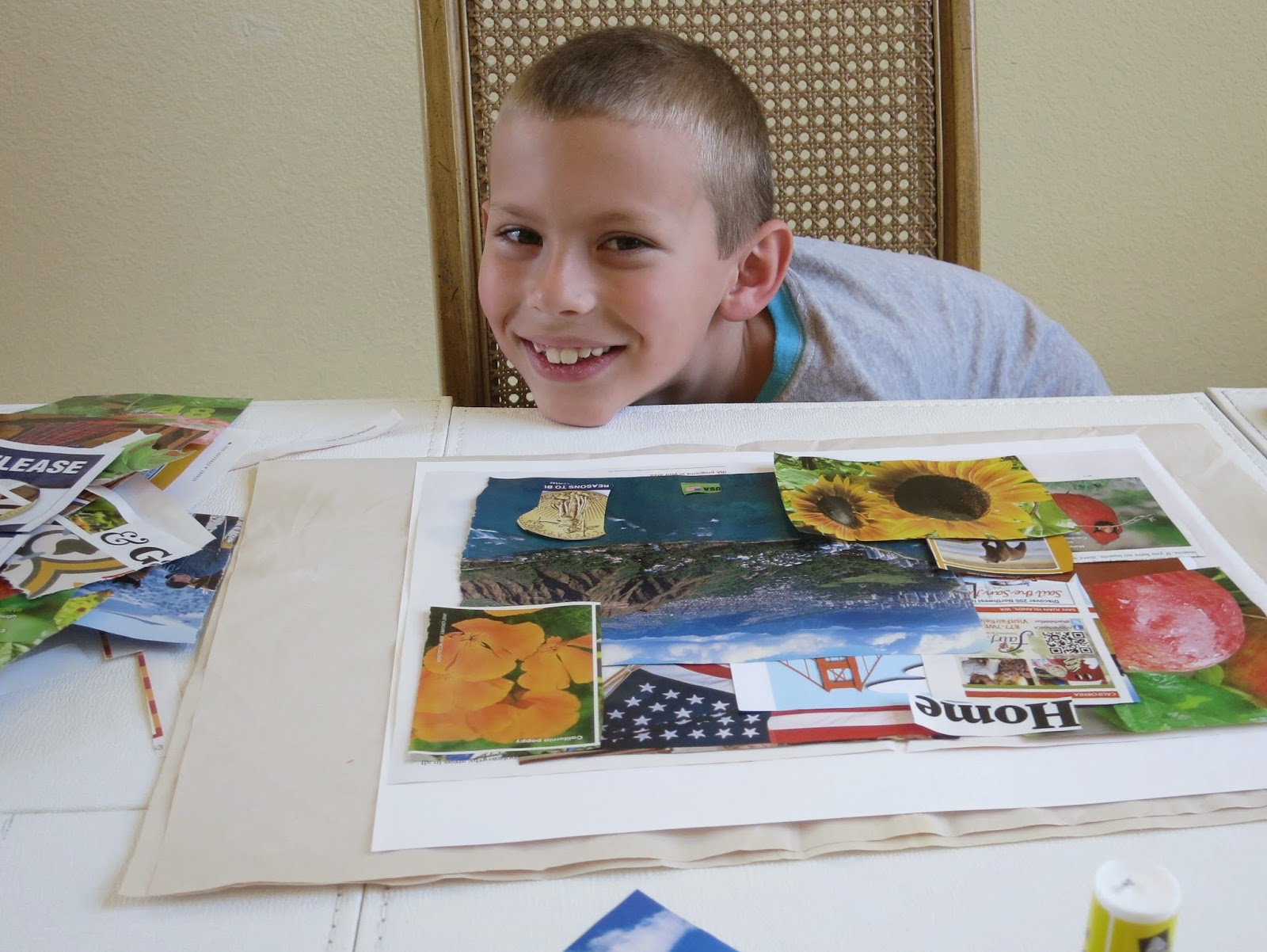 Trevor had a somewhat unconventional approach to collage. He put down a base layer, then covered it completely. He added a second layer completely covering that. I told him that usually you can still see bits of the first layer in a collage, but he ignored me and declared his work to be exactly how he wanted it. I do have to admit that it's cool, even if you can't see 75% of the items he chose to represent America. Here's his finished artwork: 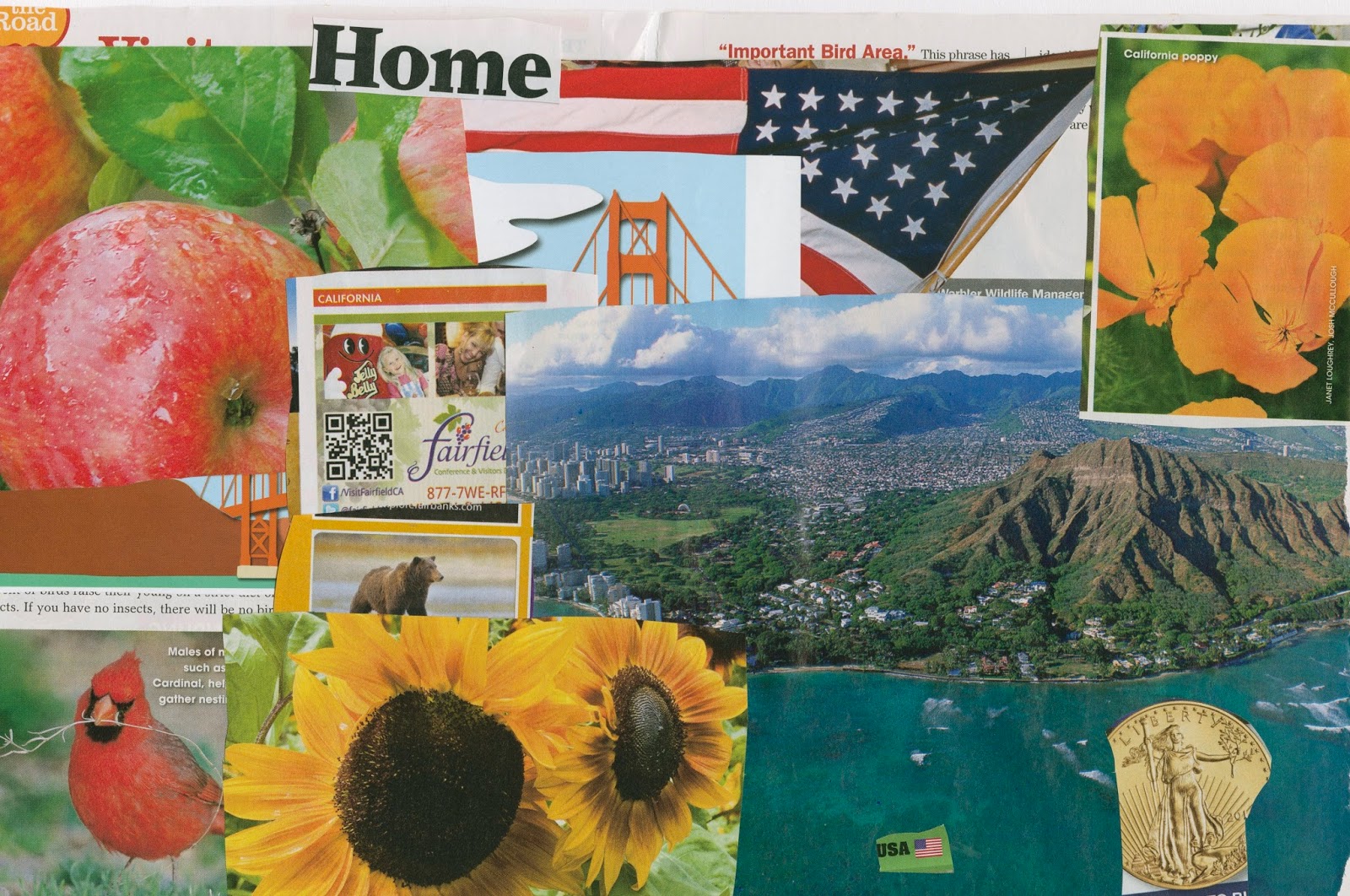 I started with a base of scenic images representing different parts of the United States. Then I layered words and images on top. Here's my finished artwork: 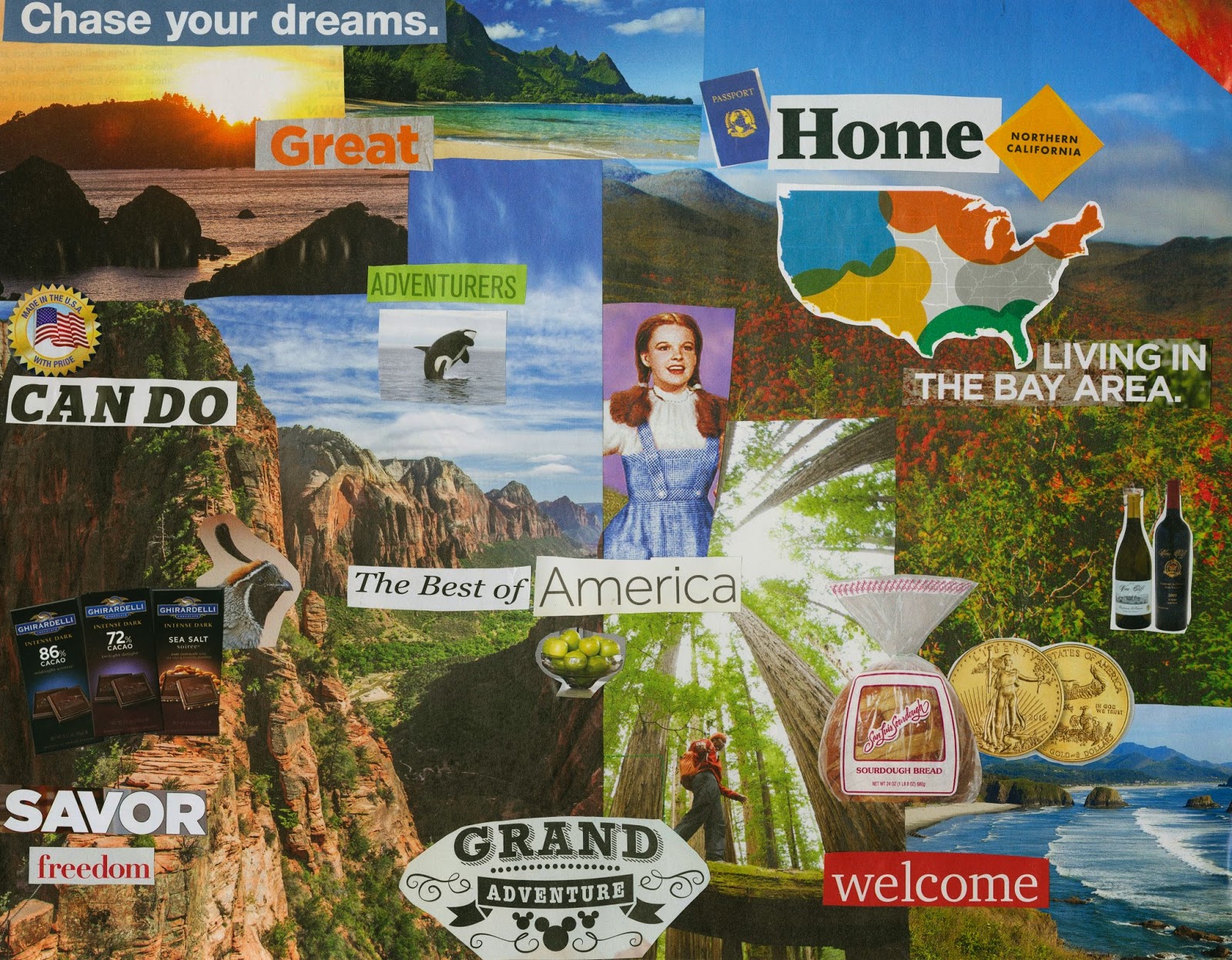 Trevor was interested in why I chose phrases like 'chase your dreams' and 'can do' and 'savor freedom' on my collage, so it was a lot of fun to share my thoughts about our country with him. He liked that I'd put local wine, sourdough bread and chocolates on my collage. He noticed Disneyland, Dorothy and the quail (which, unlike him, I did not cover completely).

This was such a fun project to do. Thanks again, Cub Scouts, for inspiring such a great activity!
Email ThisBlogThis!Share to TwitterShare to FacebookShare to Pinterest
Labels: Crafts for Kids, Cub Scouts