My first reaction when I saw a bag of dried lily bulbs at the Asian market was, "Aren't lilies poisonous?" Next, "What on earth do you do with them?" And finally, "I'm definitely buying these!"

This is the kind of insanity that happens when you do a project like 43 New-to-Me. But the beauty of it is that you occasionally find some amazing foods that you had no idea even existed. Unfortunately, that was not the case this time. 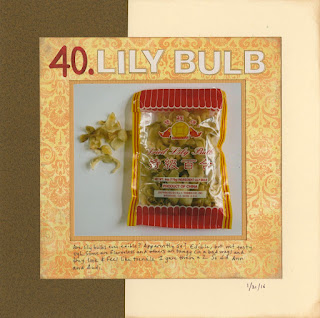 I did a bunch of research before trying them (as I still had a nagging feeling lilies were poisonous) and learned that dried lily bulbs are used in long-cooked soups, stews and desserts. They are, allegedly, a good source of fiber (which was no surprise to me after I opened the package. They looked a lot like toenail clippings). They had a very strange, very difficult-to-describe smell that had some tartness and sourness going on. I chose to make Lily Bulb Congee, reasoning that it wouldn't mask the flavor of lily bulbs the way a recipe with other flavorful ingredients might.

My friends, Andi, Ann and I tried a bite of dried lily bulb and the prepared congee with a bit of trepidation. Once you get past the toenail thing (admittedly hard to get past), the flavor wasn't much of anything. Until suddenly it was. It was weird, as one bulb would have literally no flavor and the next would be pungent and sour-tangy. The majority were essentially flavorless (and thus fine), but the ones that were strong were awful. I gave them a 2, as I didn't have to spit them out, but it was close. Andi and Ann both also rated them a 2.

Perhaps the next new-to-me food will be a treasure...
Email ThisBlogThis!Share to TwitterShare to FacebookShare to Pinterest
Labels: 43 New-to-Me, Layouts