Time to share my projects from week 3 of the CreativeLive class, 28 to Make! Monday's assignment was to make a mind map. I've done this many times before. Since my mind is pretty much always on food lately, I chose the word 'Yum' and branched off from there. I intentionally left off desserts. That could fill a whole 'Yum' chart on its own. 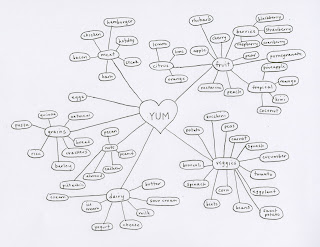 Tuesday's assignment was to create a found poem using printed material. I chose an article from our local newspaper about California's drought. Using a Sharpie, I boxed each word that I wanted for my poem, then blacked out the rest. After scanning, I digitally darkened the Sharpie to make it recede ever further from the poem. 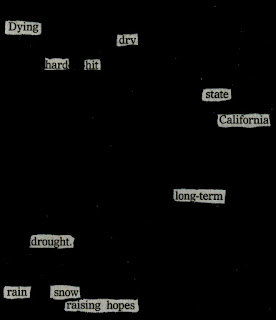 Wednesday's assignment was to play with tangrams. Again, this was something I've done many, many times - as a kid, as a teacher, and as a mom. There are a lot of tangram sets around our house, so I grabbed one. It happened to have a sketch of a rabbit Trevor had designed folded neatly inside the baggie, so I followed the sketch to make it. 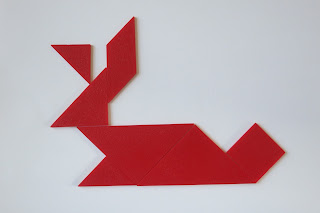 Then I made a fish. 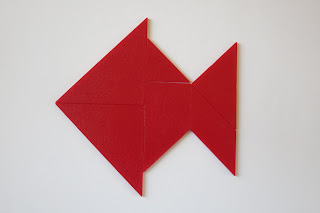 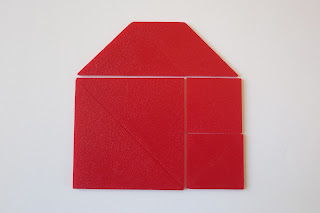 Thursday's assignment was something I've never done: translate four different sounds into a visual image. I decided to create each using a single, continuous line from a black Sharpie. Would I be able to create enough difference between the four to represent the sounds? Let's find out! Can you tell which of my drawings represents waves? Children playing? A jackhammer? Paper being crumpled? Here they are with the answers blacked out: 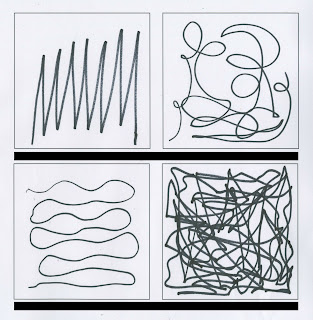 And with the answers revealed. 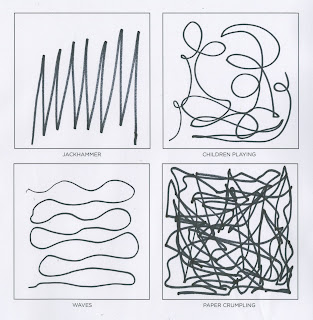 How did you do? Or, more accurately, how did I do in conveying the sounds?

Friday's assignment was called 'Notes in the Wild.' The object was to leave a sticky note for others to interact with. I decided to make a note for Trouble. For 4 years, he has had free run of the downstairs, but not been allowed upstairs. When we had our house power-washed and painted recently, Trouble was absolutely terrified. So I brought him upstairs to sit with me while I worked. He loved being near me and I loved having him here. So now he's allowed in my office area upstairs so he can hang out with me during the day. But he is not allowed in the bedrooms. He knows this, but could use some reminding. 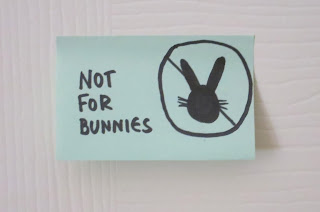 I keep expecting to see nibbles from the post-it, but so far he's left it alone.

Saturday's assignment was another people-watching Mad Lib. We went to my niece's 3rd birthday party, where there were loud guests, a delicious cake, cousins bouncing in a bounce house, and the blank stare of tired parents. 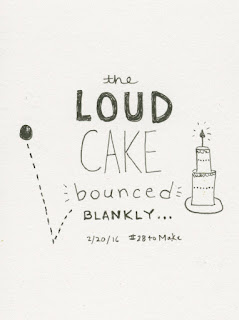 Sunday's reflection questions were the same as before, so again I'll only answer those that have changed.


Which project from this past week most closely addressed your drive to make?


I think it was the mind map. It took the longest and pushed me the most. I kept thinking of more things to add and how I wanted to organize them. I had to keep the overall design in mind so that I didn't run out of space or end up with a lopsided map.

If you had an extra hour to focus on any one of this week’s projects, which one would you pick? Why?


I'd probably make another found poem. I don't love my finished poem and would like to try more inspiring source material.

Was there a project this week that rubbed you the wrong way? If so, why do you think that was?


I was a bit disappointed that so many of the projects were things I've done in the past many times. But while I might have preferred something totally new to me, there was value in everything I made. In a way, it pushed me even more to make something different than before.

If you could ask any one historical figure to do any one of this week’s projects, who would you choose and which project would you have them do?


This question does not get easier week after week. I'd love to see what pretty much any historical figure would put on a mind map with the prompt of 'Yum.' How would the maps differ by region or time period? That would be fascinating.

Email ThisBlogThis!Share to TwitterShare to FacebookShare to Pinterest
Labels: CreativeLive