My 43 new-to-me birthday challenge has come to an end... and what a year it has been! I've discovered some amazing new favorite foods, as well as some foods that I'll be happy to never eat again as long as I live. For fun, I decided to rank the foods by the rating I gave them, starting off with the best of the best and ending with things that shouldn't even be called foods, in my humble opinion.

Seeing the list like this is interesting. I'd definitely make changes from my initial ratings on some of the foods. The goji berries, for example, weren't as bad as the green boiled peanuts, but I ranked them lower. I'm surprised I didn't give Big Red Soda a perfect 10. I love it. I think in some instances, the votes of my fellow tasters influenced mine somewhat. It would be fascinating to know how I would have ranked these if I'd tasted them completely alone. That wouldn't have been even a fraction as fun, though!

And on that note, huge thanks to everyone who played along with my birthday challenge and made it so fun: Steve, Trevor, Mom, Dad, Jonna, Kari, Brian, Timothy, Marcia, JoAnn, Diana, Stephanie, Suzzi, Ronan, Dave, Pat, Rebecca, Cailei, Ken, Sheena, Nancy, Marco, Julia, Jennifer, Janelle, Linda, Evangeline, Lisa, Kelly, Karl, Gayle, Ellen, Tanya, Andi, and Ann.
I have one final page to share from my album. Since I tried 43 foods, that left one empty spot in the final page protector. I added this: 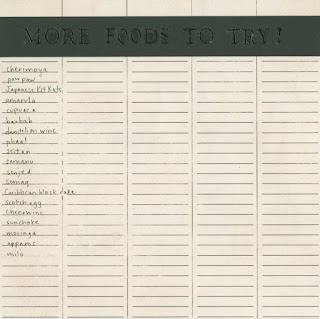 The letter stickers are silver. Not sure why they won't scan properly.

It's a list of all the other foods that either I'd hoped to try or that others recommended I try. Just because my birthday project has ended doesn't mean the fun stops. Quite the opposite!
Email ThisBlogThis!Share to TwitterShare to FacebookShare to Pinterest
Labels: 43 New-to-Me, Layouts