It's Pinewood Derby season again! As usual, Trevor came up with a really creative design. This year, it's the E-RACE-R. 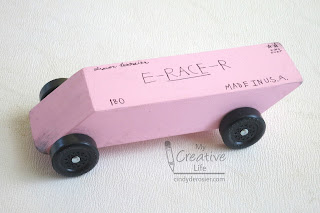 Other than providing Trevor with the pink paint and showing him how to make a template of the top before doing the lettering to be sure he liked the spacing, I wasn't involved with his car this year. My dad supervised the power tools portion and Steve supervised the wheels and graphite portion. I love that Trevor chose to wear down the corners of his car and smudge them just like a used eraser would look.

His car was not among the fastest, but it was definitely among the most creative. 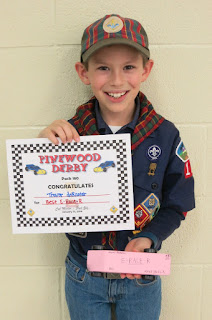 I'm very tempted to put together a layout of all his Pinewood cars over the years because they've really been fabulous. But since he only has one more year of Cub Scouts before moving up to Boy Scouts, I'm going to hold off and make that layout next year. In the meantime, if you want to see the other Pinewood Derby cars Trevor, Steve and I have made over the years, they're all here.
Email ThisBlogThis!Share to TwitterShare to FacebookShare to Pinterest
Labels: Cub Scouts, Pinewood Derby