We have been continuing to work our way through 40 new-to-Steve adventures and they have all been great fun. My plan was not to share each one until the corresponding scrapbook page was done, but last Sunday's adventure was too incredibly awesome not to share right away.

I don't remember where I first learned about it, but I've had the San Francisco Movie Sites Tour on my list of gift ideas for Steve for a long time. I added it to the list of 40 adventures for his birthday, made arrangements with friends, and booked a tour for seven on Sunday, May 1st. I contacted the owner, Bryan, to see if he had affiliate programs for bloggers (no) or coupon codes to share with readers (yes). He generously offered me a reduced ticket price and a coupon code to share with all of you. Let me assure you that neither of those influence this review. I honestly loved the tour and can't wait to tell you about it!

We met our guide (Wylie) and bus driver (Rowen) at Fisherman's Wharf at 9:50 am. Besides our group of seven, there were two Australians on the tour. We climbed onto the 23-seat bus and headed out before the official 10:00 am start time, with a promise that our promptness meant we'd be able to fit in some extras at the end. Cool! 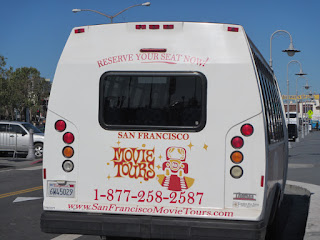 Wylie handed out a list of all the movie clips we'd be seeing, conveniently arranged by neighborhood. And then we were off! Over and over, Wylie showed brief movie clips as he pointed to the same location just outside the window. He and Rowen were in perfect sync. When we hit traffic, unexpected road construction, red lights, etc., Wylie filled in seamlessly with trivia and fun facts. He welcomed questions and worked our interests into the tour.

There were five scheduled stops during the 3-hour tour. We gratefully accepted Wylie's offer to photograph our group at each. Here we are at City Hall. From left: Suzzi, Dawn, Ronan, Larry, me, Trevor, Steve). 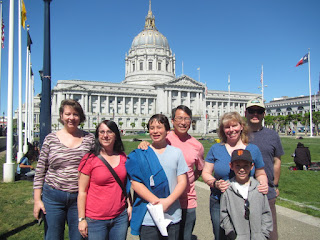 Here's our family at the Painted Ladies (aka: Postcard Row and the Full House house) 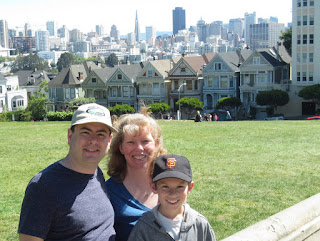 Larry photobombed the nice photo Ronan and Suzzi were attempting to get at Inspiration Point. And here we are at Industrial Light and Magic (our bonus stop), posing with Yoda. 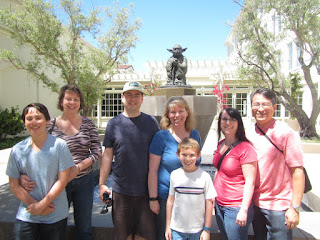 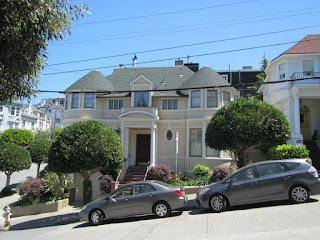 Our longest stop was at Ft. Point at the base of the Golden Gate Bridge. We had approximately 20 minutes to explore the fort, watch the surfers, and take photos. 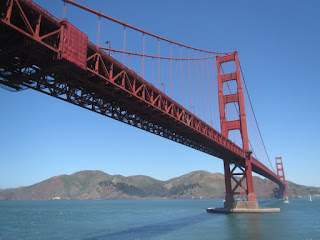 We couldn't have asked for more beautiful weather. 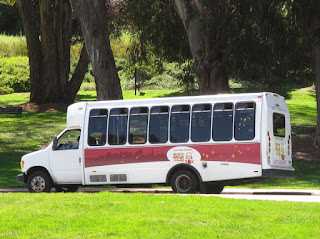 The three hours flew by. I was amazed how much Wylie packed into the tour! And I was especially impressed by how much of the city we saw. Being local-ish (45 miles away), we visit San Francisco often, and still saw sites on the tour we hadn't seen before. And the tour did not skimp on all the touristy must-sees either. It provided a fantastic overview of San Francisco.

I should mention that I'm not much of a movie person. Most of my movie-watching lately is limited to Pixar releases and other animated, kid-friendly films. But that didn't matter at all. I'd only seen about 1/3 of the movie clips (which spanned from the 1920's to present-day), but I enjoyed the tour as much as Larry, who had seen the majority of the movies. Even though the movies were unfamiliar, Wylie provided enough background to make them meaningful and it was really neat to see the filming locations simultaneously with the clip.

While I had seen only a couple dozen of the 70+ clips, Trevor had seen exactly one. I was a little concerned that he (age 9) and Ronan (age 12) might not enjoy the tour as much as the adults, but they both really liked it. And as parents, we really appreciated the fact that all of the clips and everything about the tour was family-friendly. That said, I wouldn't recommend the tour to children who are much younger than Trevor unless they are exceptionally good at sitting and listening for 3 hours. The photo stops help break it up a bit, but I'd still recommend 9+ to get the most out of this tour. 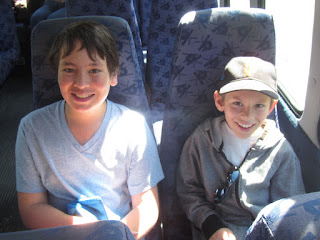 I highly recommend the San Francisco Movie Sites Tour for tourists and locals, men and women, young(ish) and old, film fanatics and those who don't watch a lot of movies. In other words, practically everyone! This would make a fantastic gift for Mother's Day or Father's Day if you haven't already made your purchases. It would also be a lot of fun for a birthday or anniversary. To save $10 off every ticket purchased, use this promo code when you purchase tickets online:

Huge thanks to Bryan, Wylie and Rowen for making our day in San Francisco so fantastic.
Email ThisBlogThis!Share to TwitterShare to FacebookShare to Pinterest
Labels: 40-4-Steve