I've been stalking Pantone's site, eagerly awaiting the reveal of the Spring 2017 Color Report. After the huge disappointment of the 2016 Color(s) of the Year, I'm eager to see what colors are in the running for what I hope will be the Color (singular) of the Year for 2017. The colors look promising: 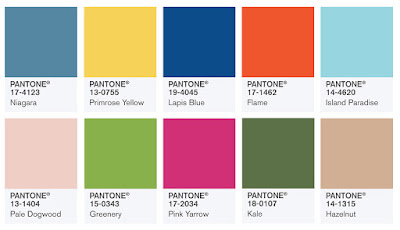 According to the Spring 2017 Color Report (which you can read in its entirety here), the colors represent a mixture of vitality, relaxation and the great outdoors. Interestingly, one color (Niagara, a "classic denim-like blue that speaks to our desire for ease and relaxation") is identified as the most prevalent for 2017. Pantone doesn't normally name a "most prevalent" color. Could this mean Niagara is a shoo-in for Color of the Year?

Let's take a look at the previous Color(s) of the Year.

The neutrals are almost never chosen as the Color of the Year (for good reason), so I think we can toss out Pale Dogwood and Hazelnut from the running. Flame and Pink Yarrow are reminiscent of 2011's Honeysuckle and 2012's Tangerine Tango, so I don't expect either of those to be named The One. I think Niagara is a strong contender, as well as Kale and Greenery. Considering their three buzzwords of the year are vitality, relaxation and the great outdoors, I'd put my money on Greenery as the most likely. But not much, as Pantone has certainly shaken things up before and could do it again.

Any thoughts or predictions?
Email ThisBlogThis!Share to TwitterShare to FacebookShare to Pinterest