Our family has gone orange during September for Hunger Action Month. As part of our celebration, we've come up with a creative and healthy orange meal each week. This time, it's carrot soup. With a swimming bunny crouton. 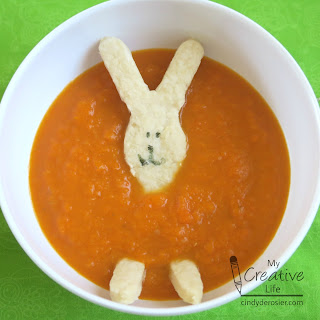 Roughly chop the onions, garlic and carrots. Heat the butter in a pan over medium heat. Add the onions and cook until they are brown and soft. Add the garlic and cook for about 30 seconds. Add the water and the broth. I used chicken broth because we had it on hand, but you can use vegetable broth if you want to keep this vegetarian. To keep it vegan, swap out the butter for oil. It's a flexible recipe. Turn the heat to high. When the liquids are boiling, add the carrots and return to a boil. Reduce the heat to low and simmer until the carrots are soft, approximately 20-30 minutes. Use an immersion blender to puree the soup. Season to taste. Garnish with grated cheese, a sprinkle of nutmeg, and/or pie crust bunnies.

Mix the flour and salt. Use a fork to cut in the shortening until it resembles coarse crumbs. Using the fork, stir in just enough ice water for the dough to come together into a ball. Roll out the dough onto a mat and use a knife to cut out the shapes (see photo). Put them on a baking sheet and cook at 375° for approximately 8 minutes or until barely darkened. Remove from pan and let cool enough to touch. Use the food marker to add faces to the bunnies. Float the bunnies in the carrot soup, inserting each piece diagonally so that the face and feet are sticking up out of the soup. 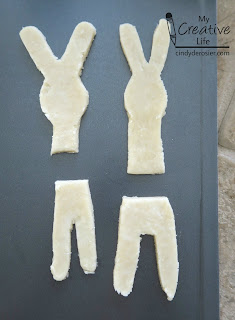 Lest you think you can skip the pie crust and just use white bread for your bunnies... 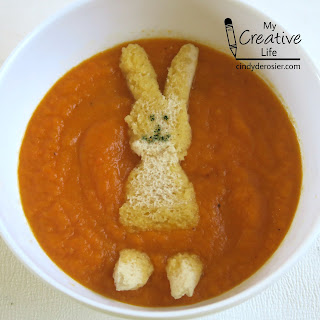 The bread started absorbing the soup the SECOND I put it in. I took this photo as fast as humanly possible. Within minutes, the bunny was completely orange and soggy and his face was just starting to run. Conversely, the pie crust bunny stayed crisp and looking just as good for 10 minutes. So definitely go with the pie crust. You can make the bunnies in advance and keep them in a ziplock bag or even freeze them.

About the food writers: I have two different brands (listed below). They work well on some foods and not great on others. Neither worked especially well on pie crust or white bread, but they were good enough. They're meant for surfaces like fondant, royal icing, and marshmallows, but I use them for all kinds of other things. You keep them in the fridge. I've literally had mine for over a decade and they're still going strong.