For the past two weeks, the deRosiers have been on an epic, 4-state adventure on the East Coast. I'd pre-scheduled all the blog posts that have been running. My hope was to start sharing posts about our amazing adventures starting right away. I'm still hoping to do so, but I wanted to check in and let you know what is going on.

We were in Pennsylvania, starting the second week of our vacation and having a wonderful time, when we first heard about the fires in Northern California. It was devastating, of course, and my heart ached for those who lost everything. But our home was 40 miles from the firestorm in Santa Rosa. Never in a million years did I think that a fire in Sonoma County would affect our neighborhood in Fairfield. 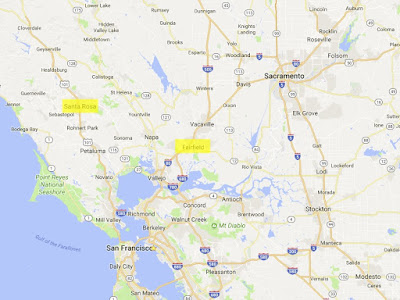 But the fires grew significantly. By the next day, it was close enough to our city that it became a concern. This is my Facebook post from Tuesday, 10/10:

I am blessed with some of the best friends in the world who offered to drop everything and head to our house to grab valuables. Steve and I made and sent lists. This was one of the most eye-opening experiences of my life. Not only did I have to figure out what material items mattered most to me, but I had to be able to describe exactly where someone could find them in a hurry. Was I missing something I'd forever regret losing? Would friends be able to find what truly mattered amidst the clutter of things that didn't? Why are we keeping so many things that don't matter?

By Wednesday morning, our neighborhood was put under a "Be Ready" advisory. The neighborhood where Trevor's school is located was put under a voluntary evacuation. The entire school district closed for the rest of the week, shelters were opened, and Trevor's school became a staging grounds to transport evacuees who need assistance. Steve and I kept thinking of more items that we'd want to save, struggling with how to prioritize them. We told Trevor about what was going on, having mostly sheltered him from the news until then. He struggles with anxiety and we didn't want him to worry about something out of our control. We reassured him that we were safe and Trouble was safe and the fire was still (sort of) far from our house, and our things are only things. We did our best to distract ourselves with the sites we'd come to see and explore, but it was hard. 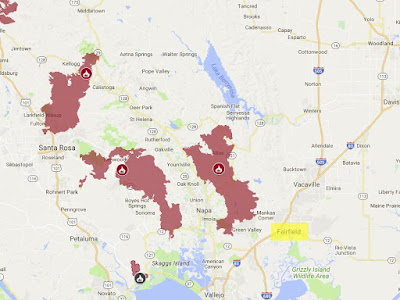 It was nearly impossible to sleep on Wednesday night. 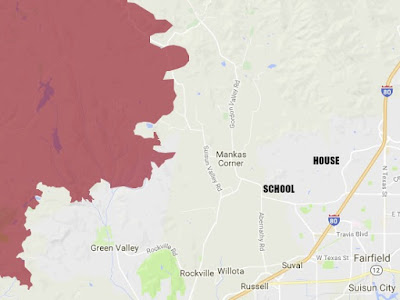 But blessedly, the weather cooperated and things were not worse on Thursday morning. I don't know whether it was scarier being away and feeling helpless or if it would have been more scary being at home and feeling helpless. Either way, I was ready to be home. This is what I posted to Facebook on Thursday, 10/12: 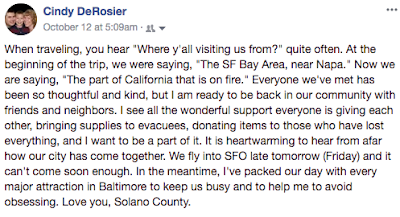 By Friday (yesterday), the firefighters had made significant progress in terms of containment. We enjoyed our last day in Baltimore without too much worry about what was going on back home. Our evening flight turned into a red-eye, as SFO was limiting the number of planes into the area because the smoke was causing the low visibility. We arrived home at 2:30 am (5:30 am to our jet-lagged bodies still on Eastern time), unloaded the car, and staggered to bed. An hour later, we woke up to a neighbor pounding on our door saying that fire had crested the ridge and was visible from our house. Trust me when I say this is something you never want to experience.

Within 15 terrifying minutes, word came that this was a separate, small ("only" 3-alarm) fire on the hill near us and that it was under control. When we could no longer still see a red glow through the smoke and had checked every possible source for confirmation that things were OK, we collapsed back into bed.

Today, Saturday 10/14, we are mentally, physically, and emotionally drained, but so incredibly grateful. While we remain in a "Be Ready" advisory, the Atlas Fire is now 45% contained and no closer to us than before. Our friends in neighborhoods under evacuation orders have mostly returned home. School is expected to resume on Monday. Things could change for the worse, but for now we are safe and we are home.
Email ThisBlogThis!Share to TwitterShare to FacebookShare to Pinterest