On Thursday, Trevor and I joined friends to tour the Amazon Fulfillment Center in Sacramento. The tour was fantastic... and completely different than I expected. Literally every single thing I assumed about how things are done there was incorrect. 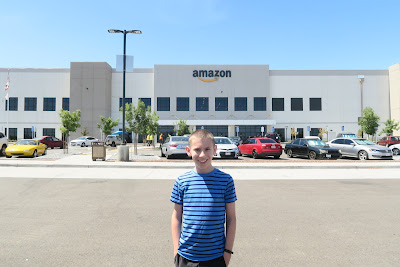 Tours are offered at 22 Amazon Fulfillment Centers (and counting) across the United States. The tour is free, but you have to sign up in advance and provide your full name and birthdate. Children must be at least 6 years old. All visitors must wear closed-toe shoes and tie up long hair. Guests can bring in a wallet, cell phones, and keys, but nothing more. Photos are strictly forbidden. Fortunately, there are many photos of Fulfillment Centers (FC) online, some of which I'm using in this post. I've linked to the source under each photo.

The Sacramento FC is located right next door to the Sacramento airport. Our 2:00 pm tour began in the (very loud) lobby where our guide checked us in and distributed visitor badges. We were escorted to a (much quieter) conference room where we received instructions and headsets. Then we climbed four flights of stairs to our first stop, Stowing.

In the Stowing department, workers scan products that are coming in from Amazon manufacturers and third-party sellers. After scanning the item, they stow it into one of the compartments in these large, multi-sided yellow bins: 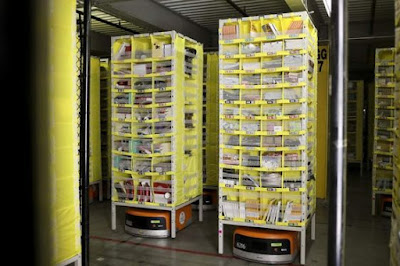 The items aren't stowed by category, type, or anything else you might expect. Instead, they are stowed almost randomly. I say 'almost' because occasionally a purple light shines on one of the compartments, which tells the stower that the item they're holding cannot go into that space. Why? Because there's something already in that space that is too similar in size, shape, or color. They can put the item into any other compartment, as long as there is space. So one bin space might hold a shirt, a DVD, dog food, and birthday candles, but it would never hold two types of dog food, since they could be mistaken for each other.

When a bin is full, a robot (which looks like a large orange Roomba) lifts the bin and moves it out of the way. How does it know where to go? The floor has white barcode stickers evenly spaced throughout. The robots read the stickers and drive the bins exactly where they need to go, using the most efficient pathway. Many robots zip right by each other without colliding, because each robot knows exactly where every other robot is. It is amazing to watch.

The Picking Department is equally fascinating. As live orders come in, the robots drive the bins to picking stations. An item comes up on the screen, a light shines on the bin compartment holding it, the picker reaches in and grabs it, scans it, and puts it in a yellow tote. Repeat, repeat, repeat. I expected that one tote would contain one person's entire order, but no. If you order 10 items, chances are almost non-existent that the same picker will pull all ten of your items. 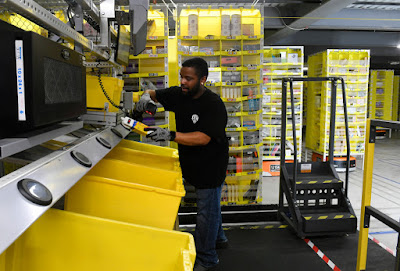 As you know, I love factory tours, but rarely do I wish I could stay there all day long and just watch. That's what I wanted to do at Amazon. When a small item fell out of a compartment and onto the floor, our guide explained what would happen, but moved us on to the next stop. I desperately wanted to stay to watch the robots notice the item and move around it, then notify someone who puts on a special detected-by-robots vest in order to pick it up. But alas, we had to move on.

Next, packaging. The department was on afternoon break, so we didn't see it in progress, but our guide walked us through the steps. As the totes arrive at a station, the packer scans an item. The computer decides which box is appropriate and how much bubble wrap is needed, then cuts the correct amount of tape for the packer to use. The packed box goes onto a conveyer belt where it is weighed. If it doesn't match the exact expected weight for the item(s), box, bubble wrap, and tape, it is spit out for someone to deal with it. Otherwise, it continues along where it is scanned and an address label is blown onto it. Yes, blown. The robot gets close to the box, but never touches it, instead puffing the label onto the box. 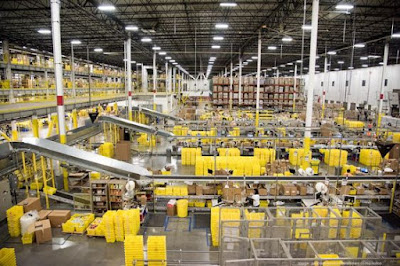 Weighed and addressed packages head down spiral slides to the Packing Department. There, they are scanned (this is a common theme at a Fulfillment Center) and sorted. All packages at the Sacramento FC leave via truck, though some only go as far as the airport next door before coming off the truck. 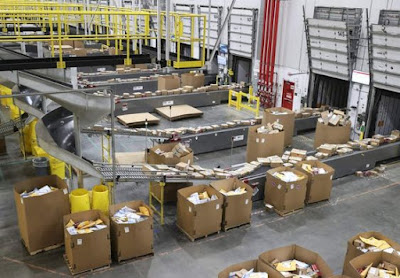 Ever wondered why your Amazon order sometimes arrives earlier than expected? There was room on an earlier truck, so they stuffed your box onto it so as not to send a truck out half full. Curious why your order may appear in separate boxes? Not everything comes from the same FC. The Sacramento FC inventory contains nothing larger than their yellow totes, which hold two basketballs. Want to know why some items come in an Amazon box and others in just their manufacturer box? The computer knows which manufacturer boxes are adequate for shipping and bypasses those items so as not to waste packaging material.

I highly recommend visiting an Amazon Fulfillment Center. The tour was so interesting, and you certainly can't beat the price (free)!

In the spirit of "You can find literally anything on Amazon," you'll find affiliate links below to some of the more unusual items I've found, all of which are small enough to be shipped from Sacramento (though I'm guessing/hoping the clams aren't.) It's never too early for Christmas shopping. (Unless, perhaps, you're giving fresh clams.) You're welcome.