This is my fourth post about our family's visit to New Orleans over Christmas. I recommend reading the first, second, and third posts before this one. Because I blog about educational travel, I was given complimentary admission tickets, discounts, media rates, and other benefits for some of the places we visited. Many attractions we toured are free to everyone. We paid full price for the rest. This has no bearing on my reviews. I only share what I truly recommend.

After spending two relatively (and uncharacteristically) restful days, we were ready for another busy day packed with New Orleans adventures. We started our morning learning how Aunt Sally's Creole Pralines are made at their headquarters near Lafayette Square. Look closely at the sign and you'll see quite a few beads dangling from it. There are beads dangling from EVERYTHING in New Orleans. 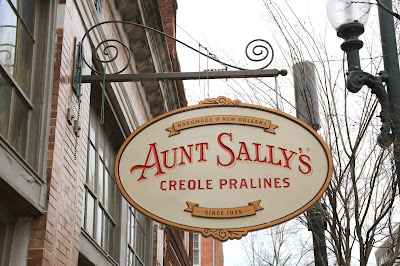 You can watch a single batch of pralines being made in many places in New Orleans, but to see a larger operation and the city's most beloved brand (based on how many people told me I HAD to have Aunt Sally's when we were in NOLA), we headed to Aunt Sally's.

Our tour started with samples (as all good tours should). Aunt Sally's makes their Classic Pralines in both original and chocolate and their Creamy Pralines in multiple flavors. I loved them all. It is impossible to pick a favorite, which is why you should get yourself a sampler pack. You won't regret it. 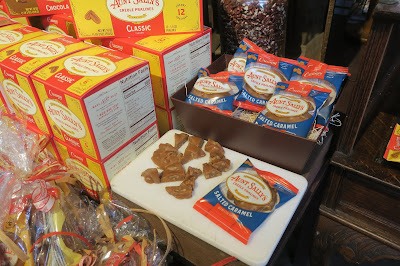 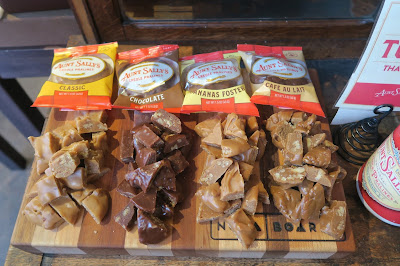 After donning hairnets, we entered the kitchen. The other people you see were part of a NOLA tour with guide Rene Brunet. Their itinerary sounded great and Rene invited us to join in for the rest of their day, but we had other commitments. Next time! 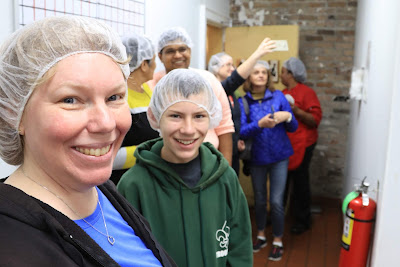 Even though Aunt Sally's makes a lot of pralines, they are all made by hand using the same ingredients you'd have in your kitchen.... 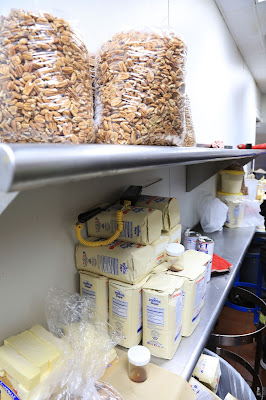 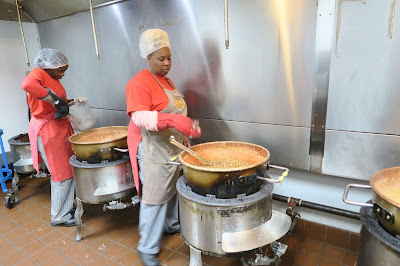 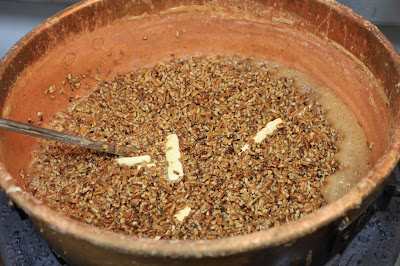 Each cook makes her batch from beginning to end, from mixing the ingredients, cooking the pralines, forming them, and then stacking them. 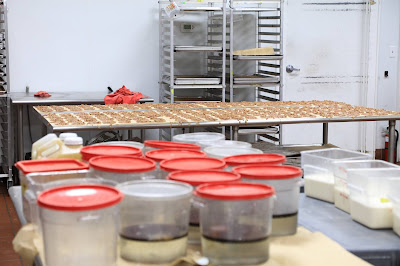 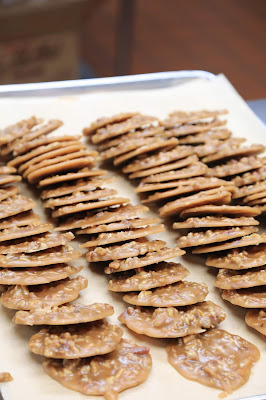 The place smelled amazing and it was so interesting learning about the past and present of Aunt Sally's. (We even heard a little about the future - there's a new seasonal flavor coming out. Somehow, I must try it, whatever it is!)


We left Aunt Sally's and headed to the National WWII Museum, where we met up with Dave, Pat, and Teri. It's New Orleans' most popular tourist attraction and for good reason. It is spectacular. And huge. 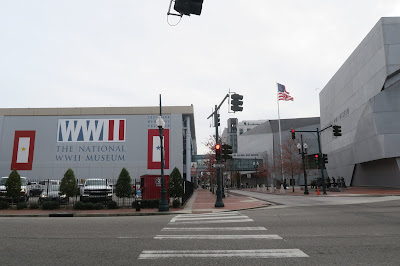 They recommend spending at least a full day at the WWII Museum, if not two days. We only had 5 hours, so we did our best to make the most of it. We started with the incredible Beyond All Boundries film. It's 50 minutes, narrated by Tom Hanks, and is a fully-immersive experience with amazing special effects. It starts with a 7-minute pre-show before you move into the main theater. Don't miss it. 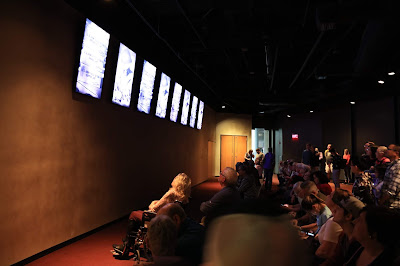 From there, we went through the various galleries as quickly as we could so that we didn't miss anything. 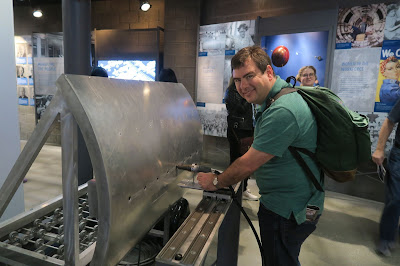 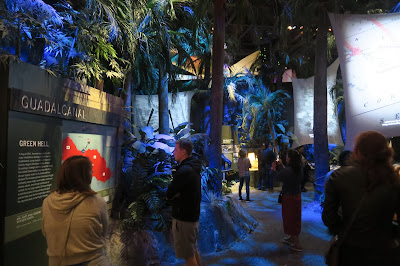 Unfortunately, it was ridiculously crowded, which made getting decent pictures difficult. Rather than show you photos of crowds, here are some from the least-crowded area in the museum. 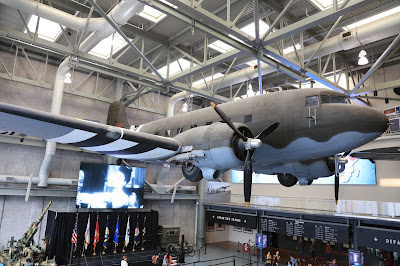 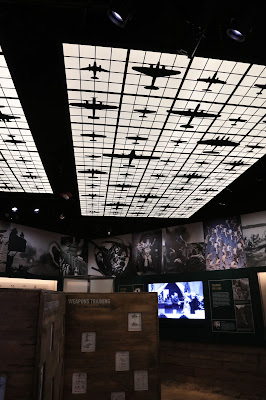 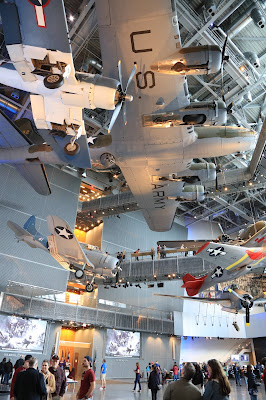 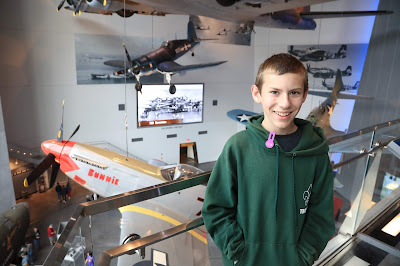 If at all possible, visit the National World War II Museum when you have all day with nowhere else to be. Avoid visiting the day after Christmas, when the museum is finally open after being closed for two days and every tourist in town goes there. Use your common sense about bringing children. This is a museum about war and it does not gloss over the ugliest parts. At 13, Trevor has already learned a lot about WWII and is mature enough to handle the content and to get something out of a museum that requires a lot of reading and is more adult-oriented.

We hated to leave the WWII Museum so quickly, but we had an appointment at another place we were excited to see: the Southern Food and Beverage Museum, aka SoFAB. 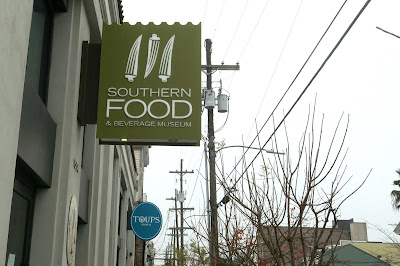 It's the perfect name, as the place is SO fabulous! 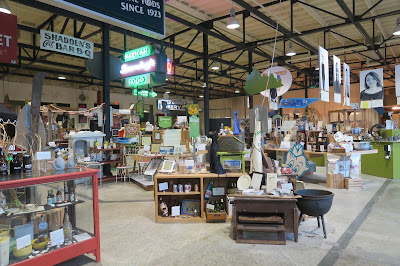 SoFAB is foodie paradise. The museum is organized by state. Above each display is a map of the state with its iconic foods and signage explaining the history and food culture of that state. Within the display, you'll find anything and everything related to food that is connected to that state. 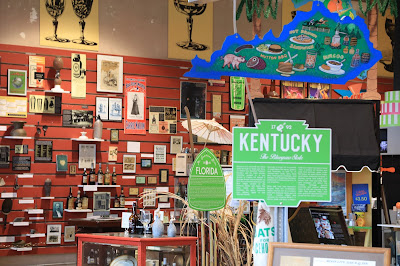 It's overwhelming how much is packed into this museum. It was fun seeing familiar items and learning about new ones. 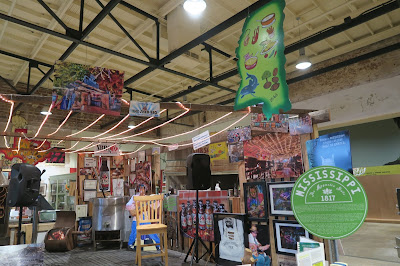 I particularly loved the displays about the states I've already visited. It was really fun seeing foods or restaurants we'd tried during our travels. 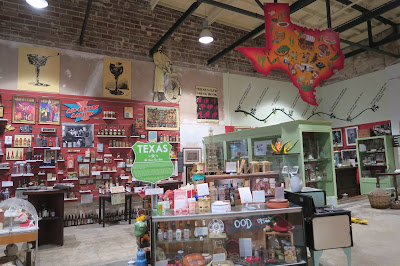 For the states we haven't visited yet, I found plenty to make me excited to visit! 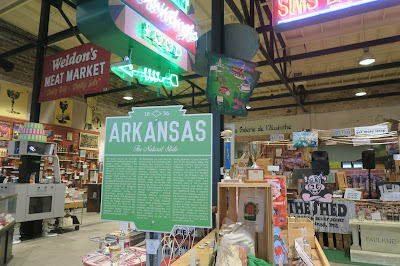 The Louisiana area was particularly interesting. I loved this audience-participation exhibit about red beans and rice. 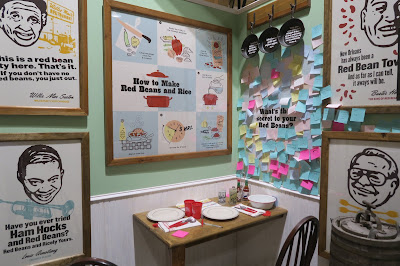 Another thing I adore about SoFAB is that they have plenty to help get kids interested in and involved with food. In addition to parties, classes, camps, and field trips, they have activities for younger museum visitors to do. They offer a picture scavenger hunt for young children and a food trivia page for older kids; Trevor did them both and loved them. 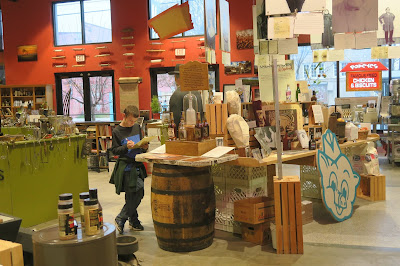 We're huge Top Chef fans, so we were thrilled for the chance to eat at Toups South. We really enjoyed Chef Isaac Toups from the New Orleans season of Top Chef. The restaurant rents space from the museum, so you don't even have to go outside to get from one to the other! 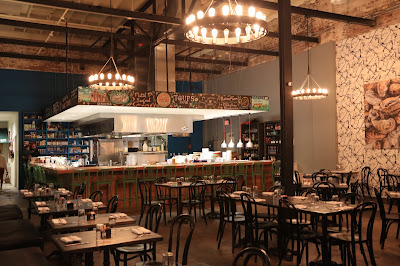 The food was outstanding and we loved watching the action in the open kitchen. 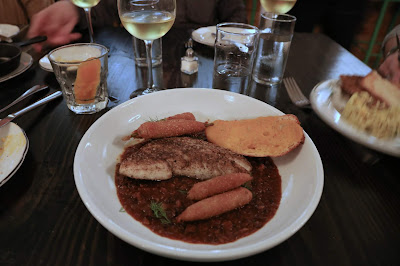 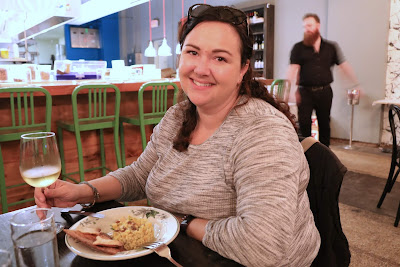 After dinner, Steve's family got a Lyft back to the hotel. It's only 1.8 miles, so we chose to walk. We enjoy walking, plus we'd walked to get there so there was never any question about how we'd get back to the room. However, we soon realized that the streets in this part of town were different during the afternoon daylight and the dark evening. In particular, crossing through the homeless camps under the freeway seemed iffy, while we'd hardly given them a second glance in the afternoon. Obviously, we made it back just fine, but if I had it to do again, I would have called Lyft in an abundance of caution. This was the only time I didn't feel comfortable walking around New Orleans. It's a very walkable city, but like with anywhere else, you need to be aware of your surroundings.


This was our last day in New Orleans, a city we'd come to love. While we were sad to be leaving, we were really excited about our next destination. I'll tell you all about that tomorrow.
Posted by Cindy deRosier at 5:00 AM