Did you know that of the 50 states, seven have named the cardinal as the state bird? Clearly, cardinals are doing something right for seven states to honor them this way! The seven are: Illinois, Indiana, Kentucky, North Carolina, Ohio, Virginia, and West Virginia. Follow the simple steps to make this cardinal craft with tissue paper and chipboard. Affiliate links below. 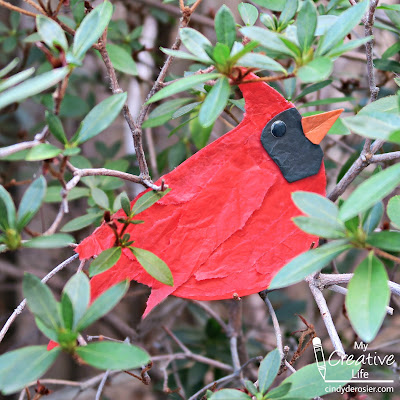 Draw a cardinal shape on chipboard. The easiest way is to draw a semicircle, then add the crest, the tail, and a wing tip. You will also need a jelly-bean shaped piece for the face and a triangle for the beak. Fit the pieces together to make sure they look good and are the right proportion. After I took the step-out photos, I ended up rounding the base of the beak a bit. 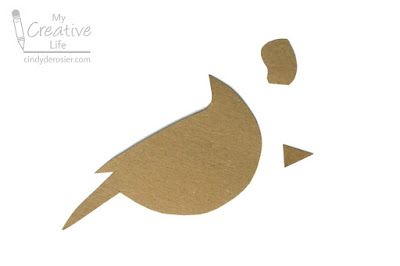 Paint the body of the cardinal red, the face part black, and the beak orange. While you are waiting for the paint to dry, tear about 20 strips of red tissue paper. 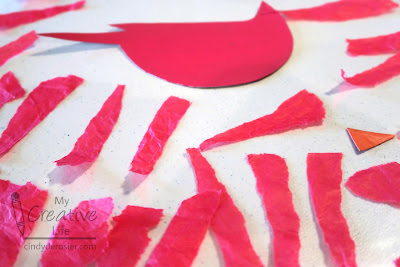 Layer the red tissue paper horizontally on top of the body to mimic feathers, making sure to cover the surface completely. The last piece you place should point at a 45° angle downward like the closest wing would do.

I think cardinals are one of the most beautiful birds. I was thrilled each and every time I saw a cardinal during our December 2019 trip to Louisiana and Mississippi. We don't have cardinals where I live. This is Audobon's map of the cardinal's range. As you can see, cardinals are wide-spread throughout the east (indicated by the dark purple) and are rarely seen in the areas colored with light purple. Southern California has one tiny pocket of light purple, but nothing in northern California. 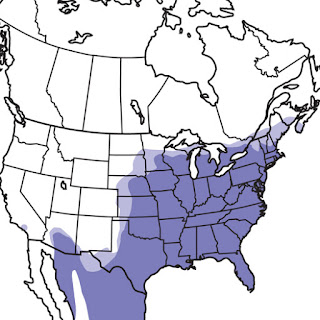