Like yesterday's Sweet Dreams craft, today's Mickey Parade Waver is recreated from someone else's idea. It originally appeared on Disney's Spoonful site, which has since closed, meaning that our link on Fun Family Crafts goes nowhere. So I added it to my list of clever crafts I wanted to recreate, rather than having the tutorial lost forever.
When Jonna came over for a visit and some crafting, she offered to tackle making the Mickey Parade Waver. She worked on it while I wove my paper blanket and checked a few other things off my crafty to-do list. My contribution to the Mickey Parade Waver was limited to digging out all the supplies as she needed them, suggesting the awesome star washi tape for the handle, and photographing the finished project. Affiliate links below. 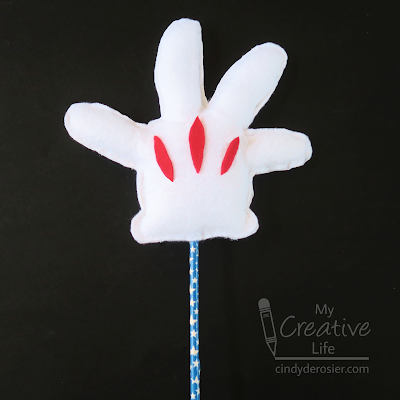 Print out the pattern. Layer it on top of a double layer of white felt and cut through all three layers at the same time. Place the pattern on top of red felt and cut out the accents.
Using red thread, sew the accents onto one layer of the white felt. Layer the two pieces of felt together again, then use white thread to sew from the bottom left, up and around the hand, stopping at the bottom right. (The entire base will be open, like a glove.)
Stuff the glove with fiber fill, using the dowel to push it into the fingers. Wrap the dowel with washi tape, then insert it into the glove. Put a bit of tacky glue along dowel, just above where the glove ends. Rotate the dowel to cover it in glue, then use white thread to stitch the bottom closed.
---------
As before, if you know who originally created this craft for Spoonful, please let me know so that I can credit the designer!
Email ThisBlogThis!Share to TwitterShare to FacebookShare to Pinterest
Labels: Crafts for Kids, Disney, felt, sewing