Today's layout is about Trevor's confirmation in March. I've shared two other pages from that day - one about Trevor and his mentor and another about what our first visit to in-person church in over a year was like with all the COVID restrictions. For this layout, I used two photos from the ceremony, one of the palms decorating the entrance to the church (he was confirmed on Palm Sunday), and a screenshot from the live broadcast of the service on YouTube. It shows the special hymn we chose as well as comments of congratulations posted by friends and fellow congregants watching online.

I briefly considered making a fourth layout about the occasion (I know! Who am I and what have I done with Cindy?!) comparing my own confirmation with Trevor's. But ultimately I decided that didn't need to be in the album. While we were both confirmed at the same age and with the same denomination, the similarities pretty much stop there. Besides the glaring fact that Trevor's confirmation occurred during a pandemic, his was a ceremony for 1. My group had 12. I'm the one on the right with the pink-trimmed dress. 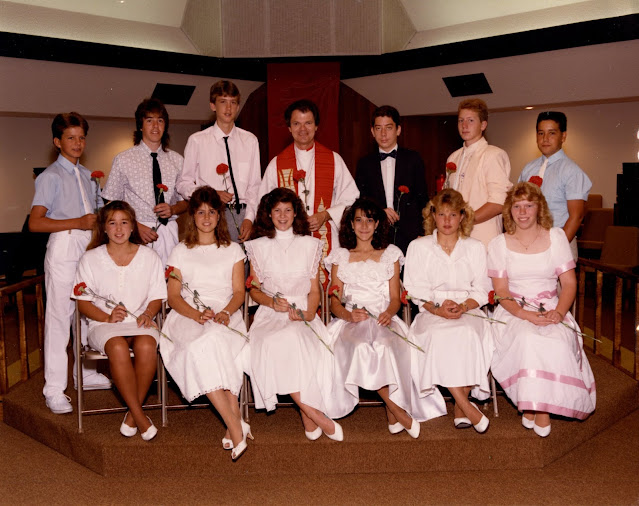 While I won't be making that layout, I am strongly considering making one with photos from my mom's (and her mom's) confirmations. It would be really cool to have a page with 4 generations of Lutherans. I know I've seen a confirmation photo of my mom and I think there's one of my grandma somewhere too. Mom, next time I visit, let's look for those photos!
Email ThisBlogThis!Share to TwitterShare to FacebookShare to Pinterest
Labels: Layouts, Scrapbook Customs, St Mark's, Steve, Trevor