If all goes as planned, the deRosiers will be traveling to three new-to-us capital cities this summer and spending time in a fourth we've visited before. As I've been researching, I came across a fascinating bit of trivia about one of them, which lead me down a rabbit hole that resulted in today's post.
All of the trivia questions below are about state capitals-with-an-A, not capitols-with-an-O. Capital with an A refers to the city (Sacramento is the capital of California). Capitol with an O refers to a building.  (You have to pass through security to go into the Capitol in Sacramento.) To make things a bit more confusing, you need to capitalize Capitol when talking about a specific building (Sacramento's Capitol building) but not when you are talking about a generic capitol building.
As I said, these questions are all about capitals. I'll do a separate capitol trivia in the future. 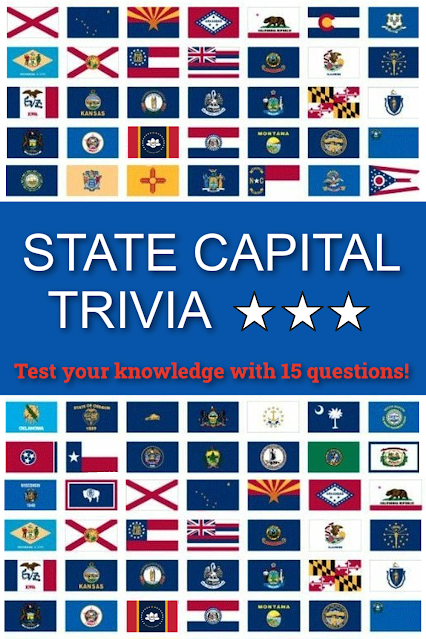 1. What state capital is the farthest north? south? east? west?

2. What is the most populated capital city?

3. What is the least populated capital city?

4. How many state capitals served as the capital of their territory, colony, or republic before statehood?

5. What is the oldest continuously-running state capital?

11. What capital city is at the highest elevation?

12. What four capital cities start with the same letter as their state?

13. What four capital cities were named for United States presidents?

14. How many states have changed their capital city at least once since statehood?

15. What is the only three word capital city?

1. Juneau, Alaska is the northernmost capital city. Honolulu, Hawaii is the southernmost and westernmost. Augusta, Maine is the easternmost capital city.
2. Phoenix, Arizona (population 1,660,272) is the most populated capital city.
3. Montpelier, Vermont (population 7,436) is the least populated capital city.
4. There are 22 current state capitals that were previously the capital city of their territory, colony, or republic.
5. Boston, Massachusetts has been a capital city since 1630. Santa Fe, New Mexico became the capital in 1610, but it was briefly interrupted by the Pueblo Revolt. You can have credit for either answer.
6. On June 12, 1910, the capital of Oklahoma changed from Guthrie to Oklahoma City.
7. Albany, New York is the first capital city alphabetically.
8. Trenton, New Jersey is the last capital city alphabetically.
9. Juneau, Alaska is the largest capital by land area. It covers 2,716 square miles.
10. Annapolis, Maryland is the smallest capital by land area. It covers less than 7 square miles.
11. Santa Fe, New Mexico is 7,199 feet above sea level. (Denver is famously mile-high, which puts it third behind Santa Fe and Cheyenne, Wyoming.)
12. Dover, Delaware; Honolulu, Hawaii; Indianapolis, Indiana; and Oklahoma City, Oklahoma are the only four capital cities that start with the same letter as their state.
13. Jackson, Mississippi; Lincoln, Nebraska; Jefferson City, Missouri; and Madison, Wisconsin were all named after US presidents.

14. Exactly half (25) of the states have changed their state capital at least once after statehood.
15. Salt Lake City, Utah is the only three word capital city.

So how did you do? Let me know in the comments! If you enjoyed this quiz, you would probably like my State Flag Trivia. And don't forget - my US Travel page has info about all of the capital cities our family has visited and my recommendations for places to go in each state. You'll also find other fun facts about the United States.
Email ThisBlogThis!Share to TwitterShare to FacebookShare to Pinterest
Labels: trivia, US Travel