I get a lot of random craft-related emails.  Recently, friends have emailed me to ask which glue gun is best, what favor to make for a 90 year old's garden-themed birthday party, and what projects I know using crumpled tissue paper.  My most recent email question was how to decorate this: 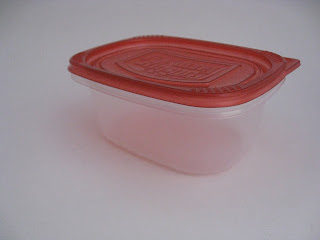 My friend Janet bought a bunch of these at a dollar store for her Girl Scouts to decorate.  Specifically, she wanted to know what would stick to it.  She was planning to have them draw with permanent markers, but wanted to know if I had thoughts about how else they could be decorated.  Rather than guess, I decided to experiment.

I started with rubber stamps.  As I suspected, regular ink rubbed right off, but Staz-On ink worked well.  It smears if you touch it right away, but after drying for 30 seconds, it's fairly permanent.  (Meaning, you can scratch it off if you try, but it doesn't just rub off.)  I tried a variety of pens to color in the stamps.  None were great, but Sharpies worked best. 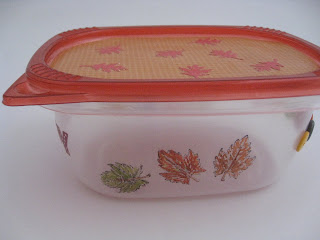 I tried paint next.  I thought it would fail and it did.  I didn't even photograph it.  Just imagine paint not sticking to plastic.  Stickers, however, were great.  They adhered easily and held firm. 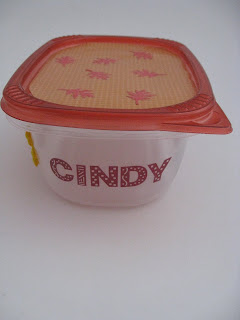 I tried two different methods to attach buttons and paper flowers.  Both Glue Dots and hot glue worked very well.  Obviously, the hot glue gun may not be the best choice for a group of children, but it was very effective (and far cheaper in cost per use than the Glue Dots). 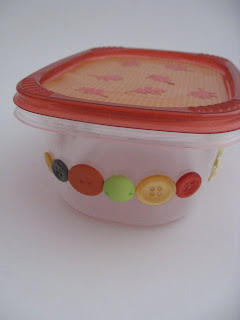 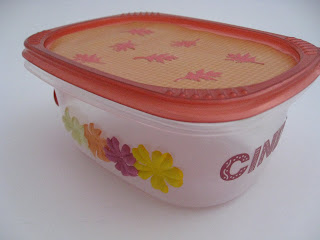 My final experiment was with Mod Podge.  I cut out double-sided patterned paper to fit in the grooves of the lid, then punched out leaves from the scraps.  I put a good coat of Mod Podge on the lid, added the paper, then slathered another coat on top, added the leaves, and put a final coat on that.  After it dried, it looked good and was secure.  Like just about everything else, it could be removed if you were specifically trying to remove it, but it's not going to just fall off.

My project looks a bit crazy since every side is decorated with different materials that don't really go together, so it won't be on display.  But it will be fine for holding garage odds and ends.  It was certainly fun to experiment.  I'm looking forward to seeing what the Girl Scouts make!
Email ThisBlogThis!Share to TwitterShare to FacebookShare to Pinterest
Labels: Crafts for Kids