There's an episode of the Paperclipping Roundtable from January 2011 entitled "Hook Drugs."  In it, the panelists discuss what they expect to see at the Craft and Hobby Association (CHA) tradeshow.  Stacy Julian mentions one area of the tradeshow floor that she never visits and doesn't really understand- the hooked rug section.  The others misunderstand her, thinking she said 'hook drugs.'  (Say it out loud... they sound the same!)

Like all crafty children of the 70's, I made my share of hooked rugs.  But it's been at least 30 years since the last time I did one.  So it was a fun surprise to open a Christmas gift and find a hooked rug kit.  My inlaws picked it up while traveling through eastern Canada.  The first thing that popped into my mind was 'hook drug!'

I brought the kit along with me during a recent family reunion.  When I opened it, I was surprised.  I was expecting the kind of hooked rug I remembered from my childhood, with short pieces of yarn and a latch hook tool.  This was not a latch hook.  The yarn was long.  Hmm. 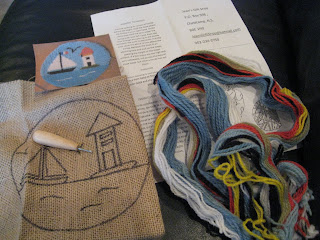 I read the instructions, which left me confused at first.  Essentially, you insert the hook in the burlap, hold the yarn behind it, and pull the yarn through, creating a loop.  Then repeat without twisting the yarn or pulling the first loop out.  I practiced on a corner of the burlap.  The latch hook rugs of my childhood were simple enough for a young child to do- this was much more difficult.  It did get easier over time, but it was still very hard to keep the loops the same size and not untwist or hook half of the yarn.  And speaking of time, it took forever to make any visible progress.  It took about 2 hours to get this: 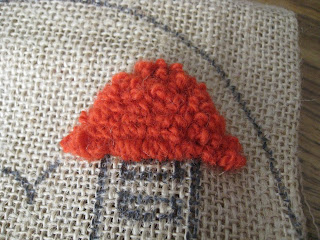 And that's as far as I've gotten!  Now that I'm back to real life and many deadlines, I'm going to be ignoring the hooked rug for awhile- probably until our next vacation.
Posted by Cindy deRosier at 5:00 AM