Today this layout is featured at Ideas for Scrapbookers: 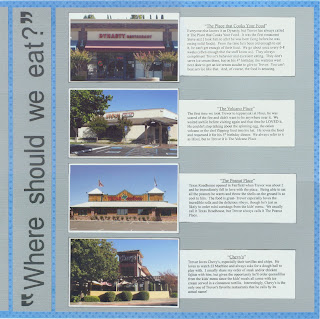 It's an unusual layout for me, in that it doesn't have any people (or rabbit) pictures in it.  I took these photos of Trevor's favorite restaurants over a period of about 6 months, in each case photographing it as we were headed inside to eat there.  Except for Texas Roadhouse.  We showed up (hoping to eat there), but the lack of cars in the parking lot was our first clue that it was closed.  I don't know why they aren't open for lunch, as they are jammed packed in the afternoon and evening...

When I took the pictures, I wasn't sure what direction I wanted to go with the layout except to tell the stories of Trevor's favorite restaurants and his nicknames for them.  I knew I needed a ton of journaling space to tell the stories.  I typed up my journaling first (another very unusual thing for me, both that I typed it and that I did it first), printed photos, and laid it out.  I added the title and carefully, painstakingly measured the whole darn thing to make sure my spacing was perfect.  (That's unsual too.  I hate measuring.)  This was the result: 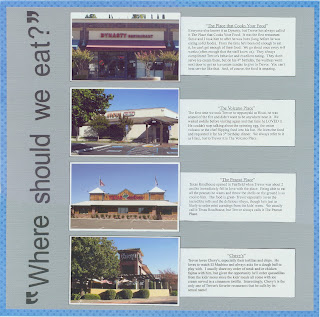 Even though the title is completely and perfectly straight in all ways, it looks bowed.  What an annoying optical illusion!  It made me really mad.  So I carefully pulled the grey cardstock off the blue patterned paper (thank goodness that Tombow is repositionable for the first few minutes) and sliced apart the layout to make a title strip that exposes two little lines of blue.  Much better.
Email ThisBlogThis!Share to TwitterShare to FacebookShare to Pinterest
Labels: Layouts