Every once in a while, Trevor announces that he will be planning a craft for me.  He gathers materials and then calls me to the table when he is ready.  I watched as he gathered up his button collection, scissors, a blue marker, and his paper. 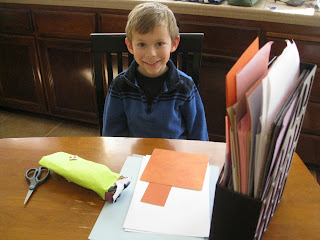 I had no idea what we would be making... until he demonstrated that we would be cutting out three increasingly larger circles from white paper.  That was a pretty big clue. 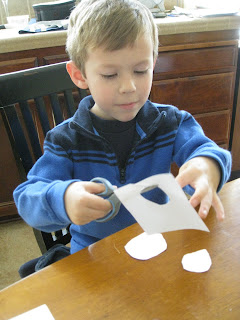 At this point, he realized he forgot glue and ran off to get it.  We then glued our circles together, added three buttons, and cut arms out of brown paper.  He carefully explained each step, then demonstrated, insisting that I watch first and THEN try it.  (Hmm... where could he have heard that before?) 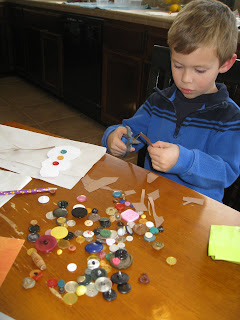 He directed me to pick two small matching buttons for eyes, cut an orange triangle nose, then add blue (?) dots to make a mouth.  The last step was to make a scarf.  I was allowed to pick any color, but he strongly encouraged me to add blue dots to the scarf before attaching it.

Even though I would have preferred black dots for the mouth, I was a cooperative student and followed his instructions precisely.  Throughout the project, he was extremely encouraging and gave detailed instructions.  He would make an excellent teacher.

Here are our finished snowmen.  Mine is the larger one on the left and Trevor's is on the right. 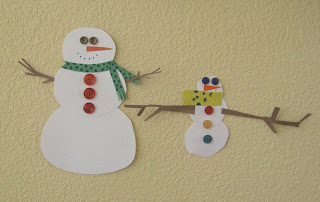 Cute, aren't they?!
Email ThisBlogThis!Share to TwitterShare to FacebookShare to Pinterest
Labels: Crafts for Kids