In the past, Trevor has always announced what he wants his Halloween costume to be months and months in advance.  This year, he hasn't mentioned it, despite the fact that it's already September and we have costume-required occasions starting in early October.  I haven't asked, because I'm not mentally prepared for it to be fall yet.  I just finished my final layout from last year's Halloween! 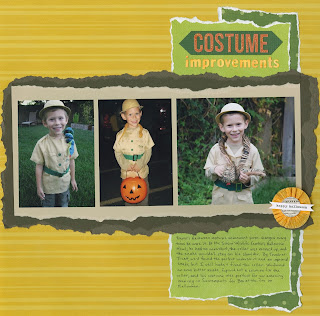 I've been struggling with this layout for a long time and I kept putting it back into the "deal with later" pile. I knew I wanted to do something with the three pictures of Trevor from his three different costumed events last year.  I was too focused on the three different snakes and missed that the larger story was that we improved his costume each time he wore it (including changing the snake). Once I realized that was the story, everything fell quickly into place.
Email ThisBlogThis!Share to TwitterShare to FacebookShare to Pinterest
Labels: Halloween, Layouts