Good Thing I Wasn't Trying to Fool Anyone...

If you read yesterday's post about my Pineapple Zucchini Cookies, you know that after making 3 entrees, countless sides, and a dessert all featuring zucchini, I still had 7 cups of shredded zucchini to use up.  I searched for a recipe that used a LOT of shredded zucchini and found one that looked extremely interesting.  I predicted yesterday that none of you would guess what I made.  Did any of you say Zucchini Cobbler?  The recipe claimed that it tastes just like apple cobbler and that no one would ever guess the 'secret' ingredient.  Intriguing!

You start by putting the zucchini in a frying pan with lemon juice.  The recipe specified that you needed to peel the zucchini before shredding it, but since mine was already shredded, that was out of the question. 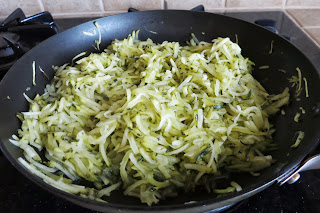 After 15 minutes, you add cinnamon, nutmeg and sugar.  You make a bottom crust, layer the zucchini, add the crumble on top, sprinkle with cinnamon and bake. 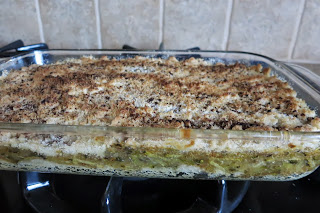 I realized fairly early on that I was not going to be able to fool anyone into thinking my cobbler was apple instead of zucchini. The peel is fairly distinctive. Fortunately, I wasn't trying to fool anyone. Steve and Trevor both like zucchini. Besides, they would have noticed the gallon-sized bag of zucchini missing from the refrigerator and been on to me.

What do you think?  Any chance you'd think it was apple if you didn't know better? 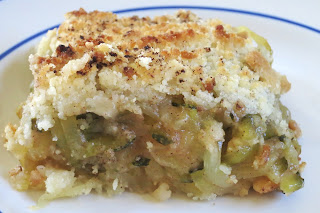 By the way, it was absolutely delicious!  It did indeed taste like apple cobbler.  This recipe is definitely going into my Favorites folder in anticipation of next year's bumper crop of zucchini!
Email ThisBlogThis!Share to TwitterShare to FacebookShare to Pinterest
Labels: Recipes