I am positively BURSTING with the news - I am an author! My book, called What Would Jesus Patent? 101 Ingenious Inventions for Christians, is for sale on Amazon!


Well, OUR book, actually, as I co-wrote it with my friend, Adam Diament. It all started about eight months ago. Technically, I suppose it started in 1997 when Adam and I met as members of the Telemark Dance Troupe at UC Davis. Over the years, we danced together during a number of ballroom dance routines and became good friends. He moved 500 miles away, but we still made the effort to attend each other's weddings and to keep in touch regularly.

In 2012, Adam wrote his first book called The Top Ten Jewish... He sent me a copy which I reviewed on my blog. Last year, he wrote his second book, called Kosher Patents: 101 Ingenious Inventions to Help Jews Be Jewish. I'm credited as an editor of that book for pointing out typos in the advanced copy he gave me.

Adam and I were talking at the beginning of 2016 and he mentioned that he and his wife's coworker, who is Muslim, had discussed writing an Islamic version of his Kosher Patents book. Adam joked that he could write it himself, but that having a Muslim co-author would give him street cred and greatly improve the chances of people buying the book, as Muslims probably don't seek out Jewish authors to learn more about their faith. I told him that if he ever needed a Christian for street cred, I was all in.

Adam dismissed the idea at first. While Judaism and Islam are based heavily on rules and regulations and rituals, Christianity isn't as much so. He wasn't sure there'd be enough patents to fill a book. I thought there would be plenty and urged him to check. Sure enough, I heard back from him later that day. A quick search had yielded many thousands of patents related in some way to Christianity. Committed to the project, we jumped in immediately.

The first task was weeding down the thousands of patents to a more reasonable number. I took on the bulk of that job, first eliminating the false positives (lots of buildings have 'cathedral' ceilings without being related to Christianity). The biggest surprise was learning that a 'Christmas tree' is a type of well commonly used with oil drilling. There are a LOT of patents covering 'Christmas tree' wells.

Next, we eliminated everything boring. Our goal was 101 patents, which didn't leave room for anything that wasn't entertaining or informative. It was tedious work reading through thousands of patents looking for the gems, but we eventually whittled down to about 150 patents. We sorted them by categories, which would become our chapters. Then we split the chapters in half and both started writing.

It took around 4 months before we had a complete draft. We tinkered. We edited. We rearranged. Adam designed our cover (to coordinate with his Kosher Patents book). He did all the formatting. Finally, we were ready for a digital proof. We did more editing and tinkering, then bit the bullet and ordered actual print proofs. It was SO exciting when it showed up and I was FINALLY touching our book. I was home alone, so I had to take a selfie and text it to Adam immediately. 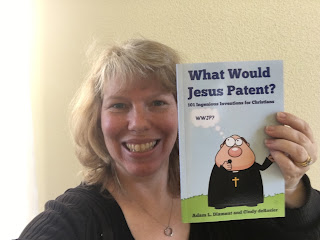 I read it cover to cover (red pencil in hand). Steve read it, Trevor read it and my mom read it. My friend Kristen, Librarian Extraordinaire, read it. I compiled all their helpful comments and suggestions and made the revisions. At that point, it was out of my hands. Adam took care of everything related to publication, including creating a Kindle version and getting both the paperback and ebook editions on Amazon. Everything is finally ready and we're so excited to share our book with the world.

It is our hope that those who read it will find it interesting, informative, and at times, amusing. It reads well cover-to-cover, but is also suitable for flipping through randomly and discovering a nifty invention or two. While we expect that the main audience will probably be Christians, it would be equally enjoyable to those from different faiths (as well as agnostics and atheists) because ultimately it is a book about problems people have had and how inventors have sought to solve them. It would make a wonderful Christmas gift for practically anyone!


And how better to promote my new book than going on a book tour?! If you are local to me and would like to invite me to your Bible study group or a similar get-together, I'd be thrilled for the opportunity. Just let me know!

It's long been a dream of mine to be able to call myself an author. I've had job titles that included the word Writer, I've done freelance writing, and next week I'll hit 1500 blog posts - almost 300 posts a year for five years. But until now, I wasn't an author. Now I am. And it's really, really cool.

Thanks, Adam. I couldn't have had a more wonderful co-author.
Email ThisBlogThis!Share to TwitterShare to FacebookShare to Pinterest
Labels: Adam, WWJP