I'm continuing to have a blast teaching US history in Trevor's fifth grade class. We're currently studying the events that led up to the American Revolution. After a discussion about the colonists' loyalties and ties to Britain, we enjoyed black tea with sugar and a snack of bread and homemade butter. We watched a video about the French and Indian War and learned that the British taxed the colonists to pay for the war debt. Like many of the colonists at the time, many of the students felt that it was unfair for Parliament to tax the colonists who did not have representation there.

We learned about the Sons of Liberty and Daughters of Liberty who organized boycotts against the British goods in protest of the taxes. We looked at examples of modern-day boycott posters and observed that many boycott posters feature large print, capital letters, the colors red and black, skulls, and catchy slogans, and that almost all are vertical. That became our inspiration for posters that the colonists would have made to spread the word about their boycotts. Here are a few of my favorites, starting with Trevor's: 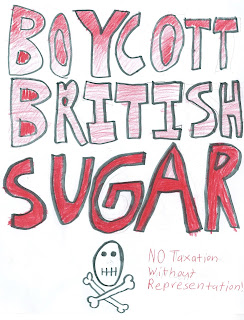 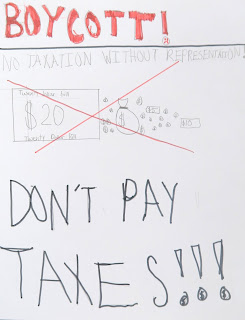 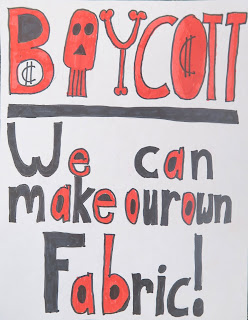 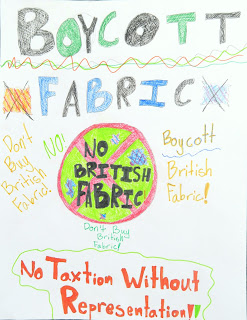 Better not get used to that British tea... major changes are ahead for the American colonists of the 1770s!
Email ThisBlogThis!Share to TwitterShare to FacebookShare to Pinterest
Labels: Crafts for Kids, Hands-on History