A triple batch of cookie dough divided into eight equal portions can mean only one thing... 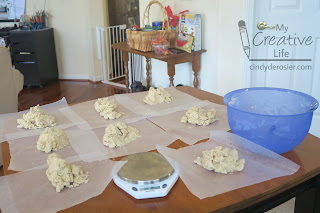 The Salomone family has grown and now includes Joe and his kids, Kai and Tragar. Steve joined as a contestant for the first time, bringing the total to eight. Nancy's mom, Sherry, joined as a judge. Once again, I served as Tim Gunn, mentor to the contestants.

The eight contestants drew numbers to determine their baking order. Each would add up to 1/2 cup of mix-ins to their dough. There can be an advantage to going first, as it's possible that someone else might use up the ingredients later contestants were planning to incorporate. Fortunately, there were plenty of options for mix-ins. I like to include expected items, like chocolate chips or nuts, but I throw in plenty of non-traditional cookie ingredients. I did not expect anyone to use cheddar cheese popcorn or ground pepper in their cookies, but both were used! 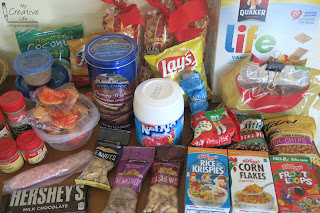 It took a couple of hours, but finally all the cookies were ready. 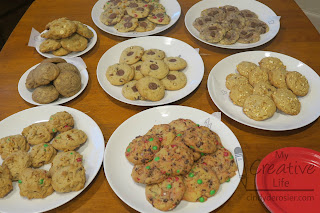 Kai (age 16) was the first contestant. He made a simple cookie with Andes Mints, Rice Krispies and chopped pretzels. He topped each with a Whopper. (I was curious to see how a Whopper would behave in the oven. It turns out that they deflate and get a bit chewy.) Kai did not name his cookie. 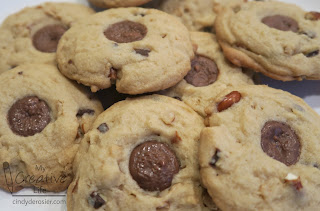 Kai's brother, Tragar (age 12), went next. While Kai opted for simplicity, Tragar's philosophy was that if a few mix-ins are good, then a ton of mix-ins must be a lot better. He added kettle corn, wafer cookies, Andes Mints, fortune cookies, crushed candy canes, Tropical Punch Kool-Aid, and lemon juice to his cookies. He made a T of Hershey's on each cookie, then sprinkled lemon zest on top. He named his cookie "Don't Worry. It's Edible." 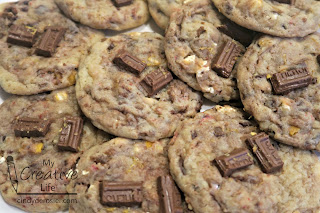 Next was Julia (age 9). She has made a mint cookie every year and it's served her well, having won the very first contest. She named this year's cookie "Non-Winter Mint." It featured red and green M&Ms, Andes Mints, crushed candy cane, and a little bit of Tropical Punch Kool-Aid. 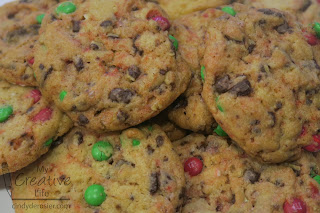 Joe (age 40-something) packed his cookies with Fritos, pretzels, M&Ms, peanut butter, and peanuts. He named his "Alava Nutter." Clever! 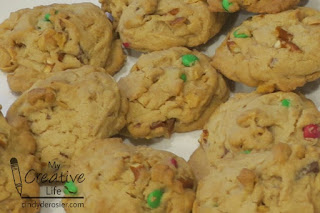 Trevor (age 10) was the one who went for the cheddar cheese popcorn. (!) He also added kettle corn, zebra popcorn, lemon juice and cinnamon. (Tim Gunn was apprehensive.) His cookie was named "Pucker Popcorn." 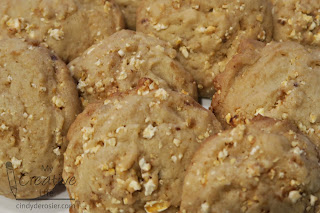 Marco (age 11) made "A Whopper of a Cookie." His cookies included Andes Mints, chunks of Hershey bar, M&Ms and butterscotch chips. Each was topped with two Whoppers. I should mention that each contestant did not know what mix-ins the others used. By this point, Tim Gunn knew that the Whoppers were going to deflate and develop an odd texture, but it wouldn't have been fair to Kai to warn Marco about this. 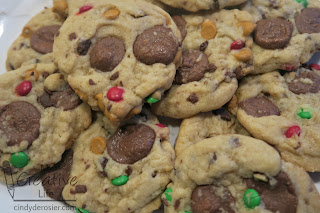 Next up was Nancy (age 44), the defending champion. Like Julia (the other former champion), Nancy made a cookie that was quite similar to her winning cookie. This year's cookie was named "It's Bigly Delicious and I Always Knew I'd Win" and it contained butterscotch chips, white chocolate chips, cashews, lemon zest and grated ginger. 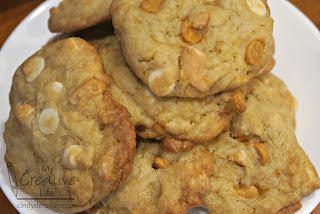 Steve (age 41) was the final baker. His cookie was named "Spicy" and contained cinnamon, cloves, allspice, nutmeg and pepper. 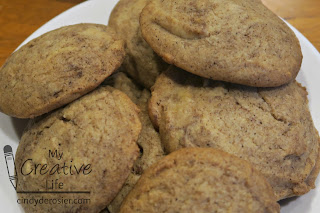 Everyone was very excited when it came time for judging. To keep the cookies anonymous and the judging unbiased, Tim Gunn introduced each cookie and its ingredients. Each person (the 8 contestants, plus Sherry and me) then gave it a score from 1-10. After all the cookies were judged, I dropped the highest and the lowest scores and totaled the rest.

I have to say, there wasn't a bad cookie in the bunch. There were great cookies and good cookies. I would happily eat any of them again, even the ones that seemed a bit odd. When I tallied up the votes, I noticed a distinct difference in how the kids rated the cookies vs. how the adults did. The kids gave consistently high scores to anything with candy, while the adults gave much higher scores to the spice cookie than the kids did. Another very interesting result: Nancy and Julia, the two previous winners who made cookies similar to their winning cookies, placed as the top two, despite the fact that we had four judges who were completely new to our competition.

I wish I had a cloche so that I could dramatically reveal the winner, but I don't. (Someone buy me a cloche, please.) So I had to resort to whipping a towel off of the winning plate. And the winner is.... Nancy, with her aptly named "It's Bigly Delicious and I Always Knew I'd Win" cookie! 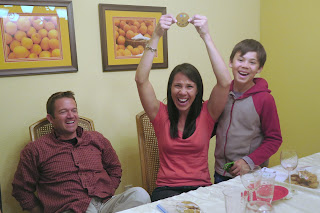 Congrats to Nancy and all the contestants for their fabulous creations. I'm already looking forward to our next competition!
Posted by Cindy deRosier at 5:00 AM