If you've been thinking, "I bet Cindy did something weird for Mother's Day," then you know me pretty well. Because I decided that Mother's Day was the PERFECT time to challenge myself with another cooking competition.

It was actually something I'd planned to do on New Year's Eve. My concept was that I would give each of my guests a list of 100 foods. Each would veto two ingredients and vote for 17 ingredients (because of 2017). Whichever 17 foods got the most votes overall without being vetoed would be the 17 ingredients I could use for every single course and beverage (along with a few freebie pantry items, like salt, pepper, and oil). I wasn't able to do the challenge on New Year's Eve, but it was a great way to spend Mother's Day with Suzzi and Ronan, two friends who somehow always like what I cook, even when it is not good. They're great friends to have, for that reason and many others. 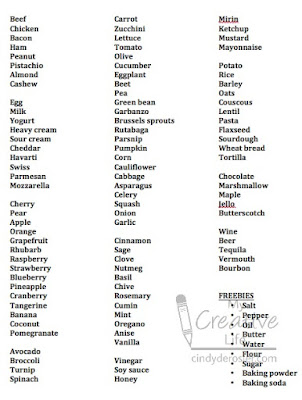 After I tallied the votes and removed the vetoes, my ingredient list included:

At first glance, I thought it would be really easy to pull together a tasty and logical meal with these ingredients, but it was harder than I thought! No matter what route I went, there was either a weird ingredient or two leftover, or an extra (and thus, contraband) ingredient I wanted to add. Where were the vegetables?! Egg would have been handy! But I did finally manage to put together a logical, if not particularly diet-friendly, menu. 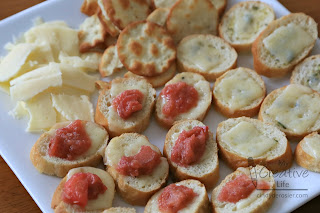 For dinner, we had chicken breast with melted havarti and a port wine mustard rosemary reduction. With it, a barley salad with avocado, tomato, and crumbled bacon. We drank pineapple-strawberry mocktails. 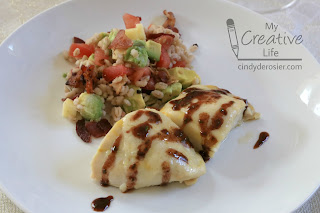 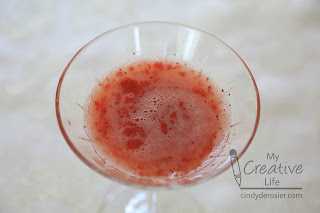 For dessert, I made this delicious 3-ingredient chocolate mousse. I served it with chilled rhubarb sauce, strawberries I'd macerated in port wine, and vanilla whipped cream. I grated fresh nutmeg over the whole dish. 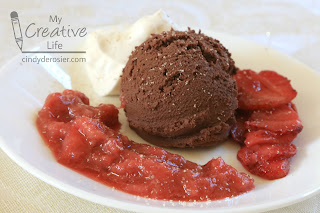 So how was it? Darn good, if I do say so myself! This was a really fun challenge and one that I'll definitely be doing again.
Posted by Cindy deRosier at 5:00 AM
Email ThisBlogThis!Share to TwitterShare to FacebookShare to Pinterest
Labels: Cooking Competition