We've been to (and through) Nevada multiple times together as a family, but we'd never been to the capital, Carson City. It's only a three hour drive from us, so we planned a quick, 2-day trip and invited our friend Suzzi to join us.

We left home bright and early to pick up Suzzi. On our way to Carson City, we stopped at the Boy Scout camp where Steve worked as a lifeguard back in the day. The camp is closed following a fire years ago, but we were able to hike into camp and see the place that is so important to Steve. I'm glad we did. It's beautiful and it was neat to hear Steve's stories and memories. 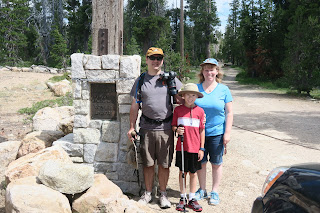 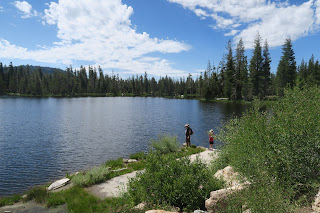 After all the hiking, we were ready for lunch. Old Town Tap in Truckee was amazing. I know it sounds weird, but if you ever go, get the Bacon and Eggs pizza. That's it on the bottom with the giant pile of arugula on it. The meatball pizza was outstanding, too. 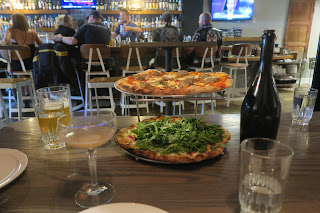 From there, it was on to Carson City. We started at the Capitol. 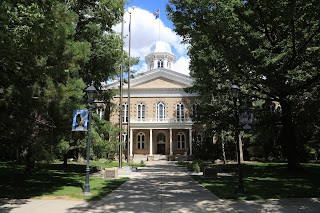 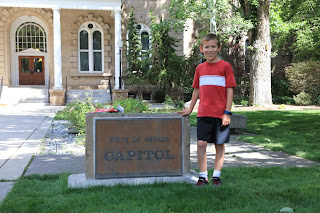 Each of the Capitols we've visited have been very different from each other, and this was no exception. The building is small, only two stories, and shaped like a +. The octagonal dome looks silver (appropriate for the Silver State) but is actually tin. We were able to explore almost every part of the building. 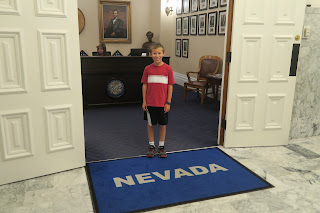 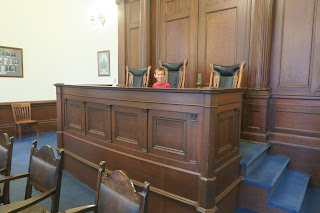 They had a neat display about their 150th anniversary, including this model of the Capitol made from playing cards. 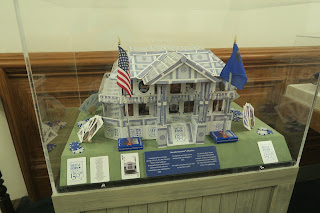 Nevada granted women the right to vote long before the 19th Amendment gave that right to all American women. Trevor had a lot of questions about the 'dollar bill' in the lower left of the display that had 78 cents written everywhere it should say $1. 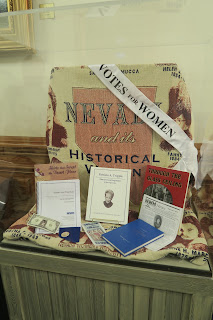 There was a large display about Nevada's state symbols, but it was the seal that caught my eye. It's beaded and absolutely stunning in its detail and precision. 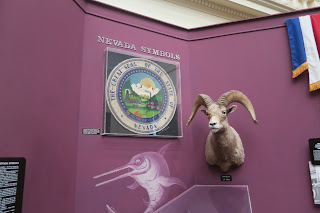 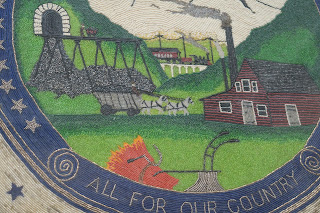 We spent some time exploring the Capitol grounds and learned that the iron gate surrounding the area was put in place to prevent horses, pigs, and other livestock from leaving droppings on the lawn which would get caught under the long dresses that women wore at the time. Apparently the fencing works, as we did not see any farm animals near the Capitol.

While we didn't actually expect to see farm animals, we DID expect to see the Liberty Bell replica. Every state was given one in 1950 and we've found one at each Capitol we've visited. But we couldn't find Nevada's. A helpful police officer told us that Nevada's bell is not on the Capitol grounds, but actually at the Nevada State Museum (our first stop planned for Day 2).

Our next stop for the day was Stewart Indian School. From 1890 to 1980, it served as a boarding school for Native Americans. 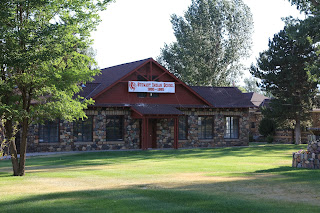 Now it is a historic landmark managed by the state of Nevada. 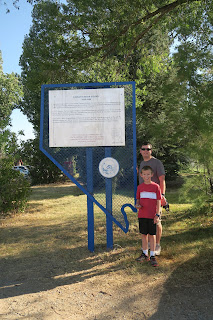 There is a free self-guided walking tour of the school that features 20 stops with first-person audio about the particular location. While I strongly recommend a visit to Stewart Indian School, you can actually listen to the tour without being there in person. It is fascinating. The stories are a mix of good and bad memories, from students and staff, some of whom came voluntarily and with enthusiasm to the school and some of whom definitely did not. I am so glad we visited. 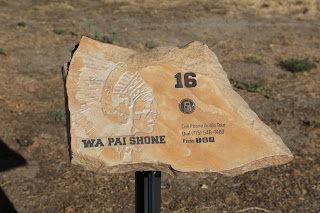 We did a bit of geocaching in the area, then headed back toward the Capitol. We passed this Pony Express Station Marker. We've seen a few of them in our travels. 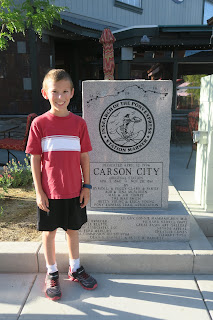 We had dinner at Scoups. If you are ever in Carson City, you MUST go. It is a charming place with a clever concept: it's a combination ice cream and soup bar. 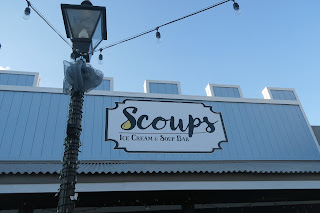 They offer three soups each day. It was really hard to pick among them, even after trying samples. They were all delicious ... and just the right serving size to leave room for ice cream! The ice cream was fantastic, too. 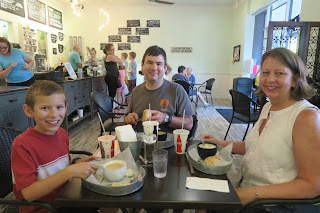 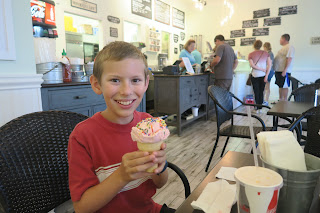 After a busy day, we were all ready to collapse. We headed to our hotel and got some much needed rest.

Day 2 started at the courtyard outside the Nevada State Museum. There's the Liberty Bell replica! 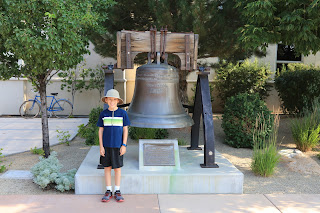 Museum volunteers offer free walking tours twice a month and we were lucky enough to be there on the correct day. Our guide, Ron, set a brisk pace as he told us all about historic downtown Carson City. He showed us several governors' homes from over the years (including the current one) and shared great stories about some of Nevada's colorful characters. 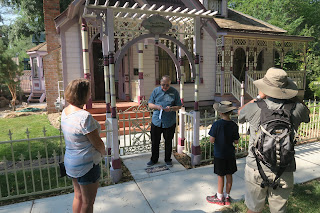 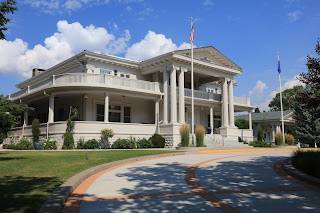 If you don't happen to be there on the correct day for a guided tour, you can do a self-guided audio tour. The Kit Carson Trail (better known as the Blue Line Trail) is a walking path through the heart of Carson City. It passes by more than 60 historic houses, churches, and other landmarks. It's easy to follow, as there is literally a blue line painted on the sidewalk. 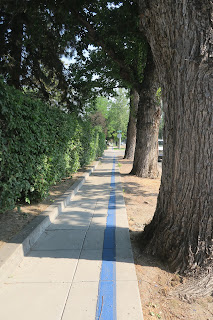 Our tour ended back at the Nevada State Museum, which is housed in the former Carson City Mint. 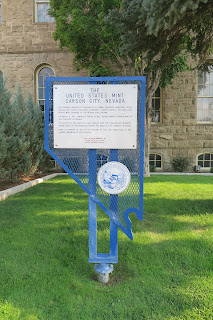 I can't say enough good things about the Nevada State Museum. We loved it! My favorite parts were the Native American exhibit, the Mint, the gems and minerals, and the mine replica. 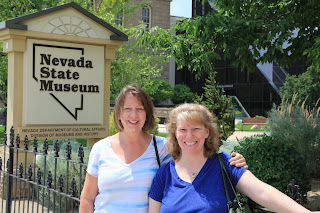 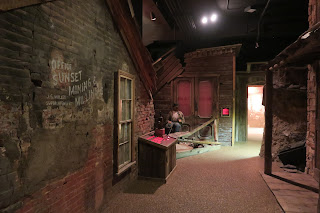 Here's another Pony Express monument. I love that all of Nevada's historical markers and informational signs are shaped like the state. 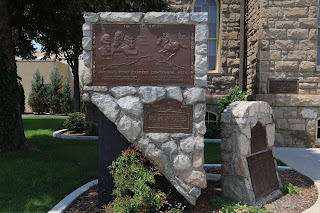 We had a late lunch at Adele's, famous for their farm to table cooking. Everything we had was amazing. I'd go back again and again if we lived in Carson City. 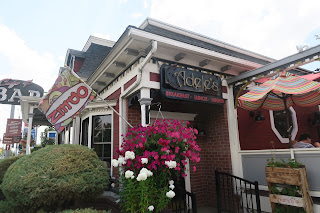 We took a final stroll through downtown before it was time to head home. 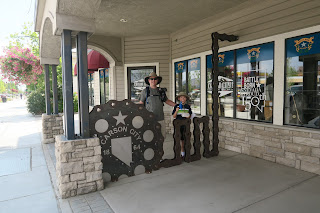 Carson City is a wonderful place to visit, full of interesting and educational sites. I'm so glad we went.
Email ThisBlogThis!Share to TwitterShare to FacebookShare to Pinterest
Labels: Nevada, Steve, Suzzi, Trevor, US Travel